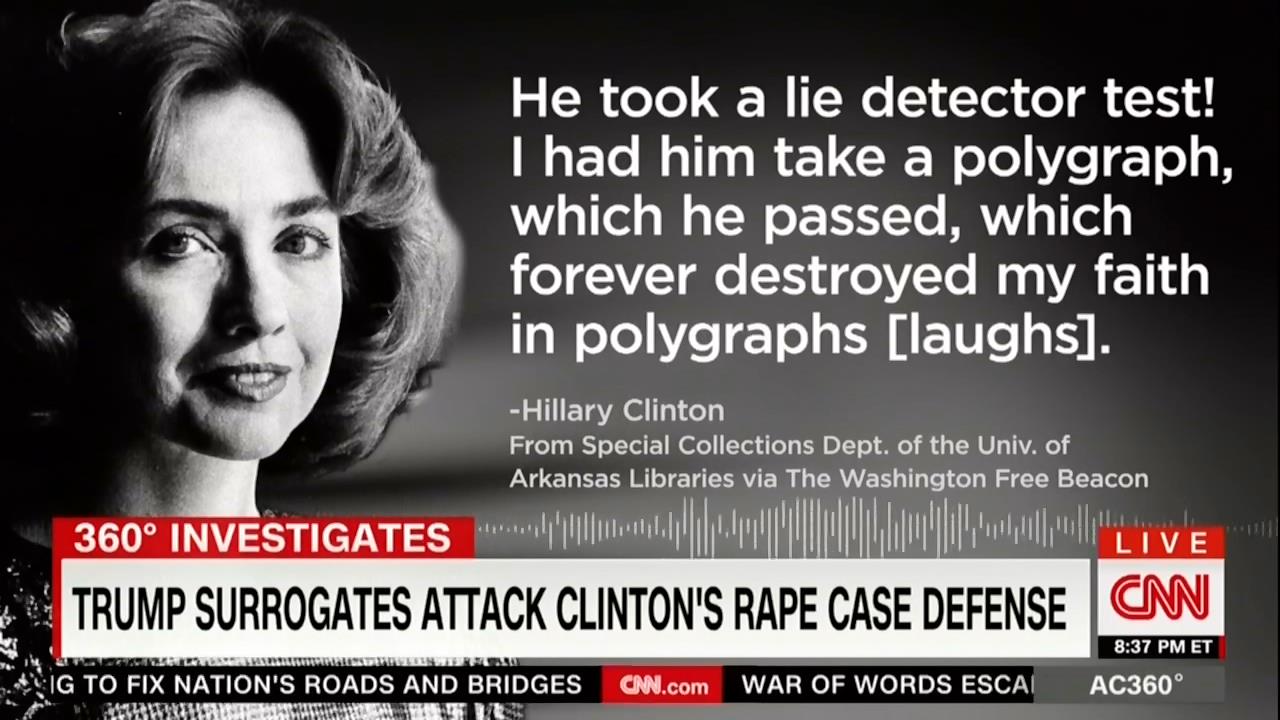 Wednesday's Anderson Cooper 360 saw one of the rare instances in which the dominant media have aired audio of Hillary Clinton laughing about successfully helping a child rapist evade justice when she was a young defense attorney in the 1970s. But, even after a full CNN report recalling the "aggressive" lengths Clinton undertook for her client, and her later being caught on audio tape laughing about her success while acknowledging she knew he was guilty, CNN legal analyst Jeffrey Toobin came to her defense.

After recalling that impugning the integrity of a rape victim was common practice in the legal profession in the 1970s, the liberal CNN analyst dismissed her laughing by likening it to telling "war stories." Toobin: "As for the laughing, you know, I didn't make out exactly what she was laughing about. It sounded like lawyers talking about war stories, which they do all the time. I just certainly didn't think anything on that tape suggested she was insensitive to women."

As CNN correspondent Randy Kaye narrated a full report on the case, she recalled Clinton trying to undermine the credibility of the 12-year-old rape victim. Kaye:

In the affidavit seeking a psychiatric evaluation of the victim and signed "Hillary Rodham," the rookie lawyer painted the victim as "emotionally unstable," suggesting she'd brought "false accusations" like this before, that she "fantasized" about older men, and that experts say children like the victim "tend to exaggerate or romanticize sexual experiences."

RANDI KAYE: The victim said the allegations in the affidavit are untrue, that she's never romanticized sexual experiences or made any false accusations before.

Kaye then recalled Clinton going to "aggressive" lengths to get her client's conviction reduced:

Clinton also insisted on getting her own expert opinion on the accused rapist's underwear after the crime lab had cut out a key part of the sample to test, then lost it. In a bold move for a first-time defender, Clinton brought what was left of the accused rapist's underwear from Arkansas all the way here to Brooklyn, New York -- more than 1200 miles -- just so a renowned forensic expert she'd hunted down could look it over -- a move considered aggressive even by the prosecutor's standards. Maybe so, but it worked.

The piece then dealt with the first of two soundbites of Clinton apparently laughing it up about her success in helping her client avoid a tougher conviction:

RANDI KAYE: In 2014, audio emerged of Clinton talking about the case with an Arkansas journalist back in the 1980s. Listen to her laugh describing the moment that she delivered her forensic expert's findings to the prosecutor.

HILLARY CLINTON AUDIO: I handed it to Mahlon Gibson and I said, "Well, this guy's ready to come from New York to prevent this miscarriage of justice! (laughs)

Then came an audio clip from 2014 of the rape victim in the case reacting to the Clinton recording:

KAYE: Those recordings were played for the victim by Josh Rogin during his interview. Her reaction was anger.

AUDIO OF RAPE VICTIM: When I heard that tape, I was pretty upset... You lied on me... and you're supposed to be for women? You call that for women? What you done to me? And I hear you on tape laughing!

Then came the second audio recording of Clinton laughing about the polygraph test on her client failing to detect he was lying as she hinted that she knew he was guilty:

KAYE: There is another piece of audio that Clinton's critics have pointed to for some time -- Clinton on the same tape laughing about her client passing a polygraph.

HILLARY CLINTON AUDIO: He took a lie detector test! I had him take a polygraph, which he passed, which forever destroyed my faith in polygraphs! (laughs) But, you know, what was sad about it was that the prosecutors had evidence.

A bit later on in the show, after conservative CNN political commentator Mary Katharine Ham observed that that Clinton's recorded laughter was the most damning part of the story, Toobin came to Clinton's defense:

I had a professor in law school who used to say, "Some people think some crimes are so terrible that not even innocence is a defense." You know, I mean, this was a rape case. She was assigned to defend it. She had to defend her client, whether he was guilty or not. So I just think she, what she did was clearly within the bounds of ethics, within the rules of the game within that period.

As for the laughing, you know, I didn't make out exactly what she was laughing about. It sounded like lawyers talking about war stories, which they do all the time. I just certainly didn't think anything on that tape suggested she was insensitive to women.