During Saturday morning's live MSNBC coverage of the Paris terror attacks, Daily Beast Foreign Editor Christopher Dickey worried that "the right wing politicians" in France "are going to do their best to take advantage of it and probably successfully to further divide this country," leading host Tamron Hall to recall concerns that a "tsunami of hatred may await Muslims."

Dickey then dismissed national security concerns about allowing Muslim refugees from Syria and North Africa to enter Europe as he downplayed the possibility such factors contributed to the attacks, as he declared, "I don't think it is  I'll be surprised if turns out to be the case. But it doesn't matter if it's true or not, people will act on that assumption."

At about 9:10 a.m., after recounting that the terrorists had chosen targets that would not be heavily protected by police or military personnel, he brought up the possibility of the "right wing" dividing the country:

So I think it's going to be a hugely difficult situation and, but the right wing, Marine Le Pen, the right wing politicians in this country are going to do their best to take advantage of it and probably successfully to further divide this country, basically to simplify it between black and white.

Hall then brought up possible backlash against Muslims as she injected:

And, Christopher, to that point of some of the victims and us not knowing the background, some of them perhaps could very well be Muslim, I've been in that area. It is in many ways, while it's the hip area, if you want to blanketly describe something that way, it is also one of diversity.

And now you also have some community leaders in the working class neighborhoods of Paris who are saying now that they fear a "tsunami of hatred may await Muslims and residents of poor neighborhoods following these deadly attacks." That's one quote from the Associated Press speaking to this divide and quite naturally the fears and the blame that follow something this unimaginable. 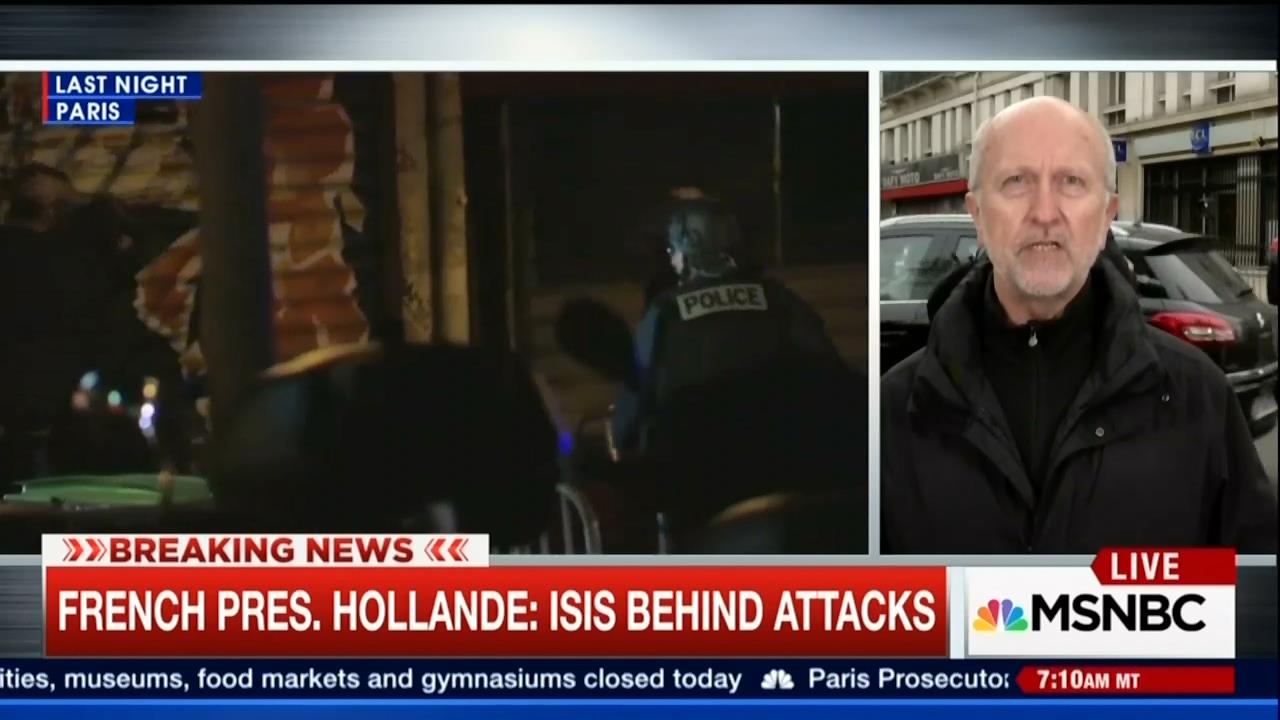 Well, that's right, and this comes on top of the kind of hysteria about refugees from Syria, refugees from North Africa coming into Europe generally and France particularly. There was already there was this feeling of being overwhelmed, that the society was changing. So there's going to be a lot of people who are going to say that that's directly related to this terror.

The Daily Beast Foreign Editor then rejected those concerns:

I don't think it is  I'll be surprised if turns out to be the case. But it doesn't matter if it's true or not, people will act on that assumption. And you actually already have some installation, some places that are being watched very closely by police to try and stop retribution. And not only in this country, also in Italy and in other countries.