CNN’s Blitzer Presses Crist on Party Preference, ‘You Just Can’t Caucus with Yourself’ 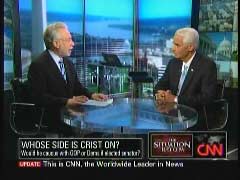 During an interview on Saturday’s The Situation Room with independent Florida Senate candidate and Governor Charlie Crist, CNN anchor Wolf Blitzer pressed the former Republican to announce which party he would choose to caucus with if he is elected to the Senate, and brought up his current associations with Democrats and flip-flops toward more liberal positions.

As Crist repeatedly tried to evade acknowledging the importance of being aligned with one of the two major parties to have influence, and the likelihood that he would ultimately choose to ally with one of the parties, Blitzer was persistent in pressing for an answer, at one point quipping: "You just can't caucus with yourself, if you will, if you want to have some influence."

Crist eventually seemed to hint that his decision would depend on which party holds the majority after November: "And you’ve just hit on the pivotal issue really: What is in the best interests of the people of Florida? We don’t know who’s going to be in the majority November 2 nd after the general election. And so I think it’s important to keep an open mind, to stay committed only to one thing, and that’s the people of my state."

After playing a clip of Republican Senate candidate Marco Rubio accusing Crist of moving toward President Obama politically, Blitzer queried: "But are you increasingly embracing the Obama agenda? Because he’s saying you flip-flopped on a whole lot of issues where you were a Republican, but now you’re siding with the Democrats, including President Obama."

Below is a transcript of the relevant portion of the Saturday, August 14, The Situation Room on CNN:

WOLF BLITZER: All right, let’s talk a little bit about why you’re here in Washington. Among other reasons, obviously, you want to be in the Situation Room, our Situation Room-

BLITZER: -but tonight you're going to a fundraiser and some prominent Democrats are hosting this fundraiser for you, including someone very close to the former President Bill Clinton and Hillary Clinton. What does that mean? Are you now a Democrat for all practical purposes?

CRIST: I think it means we have broad support, and I’m very pleased by that. I mean, from Republicans, Democrats, independents. I think everybody has the notion and the idea that they would like an independent voice in the United States Senate fighting for Floridians first. And that's what this is really all about – being independent, putting people above the party, and making sure that they have a voice in the Senate that’s an honest broker, looks out for their interests first. And Democrats and Republicans and independents want it.

BLITZER: Are you getting more support now from Republicans or Democrats?

CRIST: I’d say it’s pretty evenly split. I mean, you know, a lot of friends from the Republican party have stayed with us, continued to help, and God bless them for that. New Democrats who have become very good friends and some Democrats have been friend for a long time are just stepping up in a much more significant way now.

BLITZER: The fundraiser tonight’s going to be basically Democrats, though?

CRIST: That's correct, it is.

CRIST: I’ve always said that I'll caucus with the people of Florida. And what I mean by that is, issue by issue, whatever's in the best interests of the people of my state, my fellow Floridians, I want to be able to be with those that are going to help Florida.

CRIST: Well, if I have the honor of winning, I'll have a vote in the United States Senate.

CRIST: Well, I got to keep my eye on the ball, and the eye on the ball for me means looking at November 2 nd. I'm not going to be a chairman of anything if I don't get elected to the Senate first. So I have to continue to work hard, campaign hard, continue to strive to earn the trust and confidence of my fellow Floridians.

BLITZER: So when the Democrats at the fundraiser tonight ask you, Charlie Crist, we're going to give you money, they'll say. Are you promising us you’ll be with Harry Reid and the Democrats assuming he gets re-elected in the United States Senate, you won't go with Mitch McConnell and the Republicans?

CRIST: I’m not going to commit to either one because I’m only committed to the people of Florida.

BLITZER: So you'll commit after, if you’re elected. Is that what you’re saying?

CRIST: Well, I don’t know that Wayne Morris did. I think he literally took a seat in the middle of the aisle, right?

BLITZER: He didn’t. You’re right. You’re right on that. He didn’t. He took a seat in the middle, but, you know, then the people of Florida could suffer if you don’t have the influence that you would like to have.

CRIST: And you’ve just hit on the pivotal issue really: What is in the best interests of the people of Florida? We don’t know who’s going to be in the majority November 2 nd after the general election. And so I think it’s important to keep an open mind, to stay committed only to one thing, and that’s the people of my state.

BLITZER: Your Republican challenger, Marco Rubio, was here. He was sitting in that seat in the Situation Room just a little while ago on July 20. He said this:

BLITZER: You heard what he said.

CRIST: I heard what he said.

CRIST: Well, why wouldn't I smile?

BLITZER: But are you increasingly embracing the Obama agenda? Because he’s saying you flip-flopped on a whole lot of issues where you were a Republican, but now you’re siding with the Democrats, including President Obama.

CRIST: Well, that's what you’d expect him to say. He's my opponent after all, one of them. And we don't know who the other one’s gong to be yet until the primary concludes on August 24. So I look forward to that. I really do. And there will be distinctions between us on a lot of issues. But that's the kind of thing you hear from a lot of the, you know, party candidates, if you will. They like to take shots at people. I'm not here to really do that today. I'm here to offer myself to the people of Florida as an independent voice who wants to rise above that kind of back-and-forth stuff that's driving them crazy all over the country.