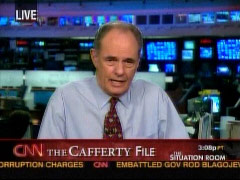 On Friday’s The Situation Room on CNN, Jack Cafferty used his regular "Cafferty File" segment to attack Rush Limbaugh and other conservatives, citing Colin Powell’s recent words criticizing Limbaugh’s role in speaking for Republicans. After he quoted Powell’s remarks, Cafferty clarified that Powell was "talking about that gasbag Limbaugh," and posed the question for viewers: "Should Republicans stop listening to Rush Limbaugh?" Later in the program, all the viewer emails he read were harshly critical of Limbaugh, with one even comparing him and Sean Hannity to the Ku Klux Klan. Cafferty, reading email: "Connie in Chicago: ‘Yes! Limbaugh is a far-right agitator of the worst sort with a 1950's mentality of what values 21st century America should reflect. I expect him and other like-minded Sean Hannitys of the world to step out of their closet and display their white sheets and dunce caps. Limbaugh is a bad joke.’"

Cafferty, whose regular "Cafferty File" segment itself is far from being a unifying feature of CNN’s The Situation Room program, read emails that accused Limbaugh of "hateful rhetoric," "sociopathy," "inciting hate and fear," insulted Limbaugh’s listeners as "ignorant," referred to Limbaugh "taking his happy pills," and suggested that moderate Republicans should "scrape" the conservative faction "from their shoes."

Below is a transcript of relevant portions from the 6:00 p.m. hour of the Friday, December 12, The Situation Room on CNN:

JACK CAFFERTY: Former Secretary of State Colin Powell is critiquing members of his own political party, and he’s not mincing any words. In an interview with CNN’s Fareed Zakaria, Powell said the Republicans’ attempt at polarization for political advantage backfired in the most recent election. You’ll recall that Colin Powell crossed party lines and actually endorsed Barack Obama before the election, and he has since said that he’s not interested in a position on the Obama team. Colin Powell said that Republicans have to, quote, "stop shouting at the world and at the country," unquote, saying the party needs to "take a hard look at itself." Powell said he was impressed by a recent article by Mort Kondracke in the Capitol Hill newspaper Roll Call that asked the question, "Can we continue to listen to Rush Limbaugh?" Powell asked if this is the "kind of party" the Republicans really "want to be, when these kinds of spokespersons seem to appeal to our lesser instincts rather than our better instincts." Talking about that gasbag Limbaugh. So here’s the question: Should Republicans stop listening to Rush Limbaugh? Here’s a hint: Yes! Go to CNN.com/CaffertyFile to post a comment on my blog. His currency, I think, in the wake of these recent election results has probably gone down a little bit.

WOLF BLITZER: I wonder if his ratings, though, have gone down.

BLITZER: He does really well, you know, with those listeners.

CAFFERTY: And his paycheck hasn’t gone down.

CAFFERTY: What, did he sign a $400 million contract to peddle that malarchy that he puts out every day?

BLITZER: He’s got a lot of money.

CAFFERTY: Question this hour is: Should Republicans stop listening to Rush Limbaugh? Gina in Racine, Wisconsin: "If they want to stop being distracted by misplaced hatred and hyped up stories that turn their attention away from our country’s real issues and if they want to come together and unite to make this country better, they will stop listening to Rush, Hannity, O’Reilly and Coulter.

Annie in Georgia writes: "It’s only the most ignorant of them that put any credence in Limbaugh’s hateful rhetoric, and sadly they can’t help themselves, so they won’t. But they should. He’s toxic, and that becomes dangerous in such difficult times."

Ryan in Illinois: "I never thought of sociopathy as good entertainment, but Limbaugh does get paid a lot of money for inciting hate and fear. Basically, I just feel bad for those who listen to the man. Even after just a few minutes of him, I always feel dizzy and a little nauseated."

Connie in Chicago: "Yes! Limbaugh is a far-right agitator of the worst sort with a 1950's mentality of what values 21st century America should reflect. I expect him and other like-minded Sean Hannitys of the world to step out of their closet and display their white sheets and dunce caps. Limbaugh is a bad joke.

Joyce in Florida: "Other than Hannity and O’Reilly, I didn’t know anyone did listen. Most people prefer to actually think."

Cynthia writes: "They ought to have done that a long time ago, especially when they found out about him taking his happy pills."

John in Massachusetts: "Telling a Republican to stop listening to Rush Limbaugh is akin to telling Pat Robertson to discontinue his alleged conversations with God."

And Jim in Vancouver, British Columbia: "Rush Limbaugh, always good for a laugh, but his followers now form the basis for a waning right-wing political faction. Moderate Republicans should scrape this faction from their shoes."