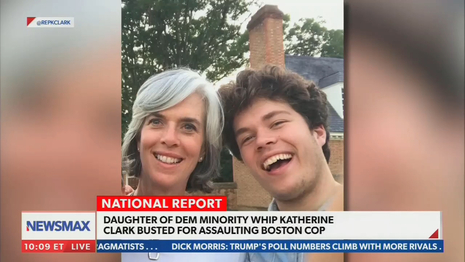 Broadcast networks ABC, CBS, and NBC have been silent about the arrest of Jared Dowell, the adult child of Congresswoman Katherine Clark (D-MA), for allegedly assaulting a police officer during a riot. Since the arrest late on Saturday, January 21, none have spent even a second of airtime on the incident, despite Clark being the second-highest ranking Democrat in the House of Representatives.

MRC analysts examined the flagship morning and evening newscasts between January 22 and January 24 on all three broadcast networks (excluding evening newscasts on January 24; which this piece will be updated to include when they occur). During that time, neither Clark nor her child was mentioned at any point.

As far as liberal cable networks go, MSNBC was also silent on the incident. Meanwhile, CNN acknowledged the arrest twice on Monday, for a total of two minutes and 12 seconds of coverage.

Dowell, 23, who claims to be non-binary and goes by the name Riley, was reportedly caught spraypainting “NO COP CITY” and “ACAB” (“all cops are bastards”) on the Boston Common bandstand. A struggle allegedly ensued as Dowell was being arrested, and an officer was reportedly “hit in the face and could be seen bleeding from the nose and mouth.”

The Congresswoman announced the arrest in a tweet on Sunday evening:

Last night, my daughter was arrested in Boston, Massachusetts. I love Riley, and this i s a very difficult time in the cycle of joy and pain in parenting. This will be evaluated by the legal system, and I am confident in the process.

Dowell has been charged with assault with a dangerous weapon, destruction or injury of personal property, and damage of property by graffiti or tagging.

For those wondering what the broadcast networks deemed more newsworthy than Dowell’s arrest, CBS Mornings on Monday carried a full-length report about Beyoncé’s trip to Dubai. Meanwhile on Tuesday, both ABC’s Good Morning America and NBC’s Today ran reports on the most popular names for dogs in 2022.