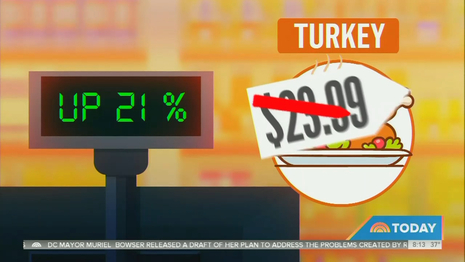 MRC analysts examined the big three broadcast networks’ (ABC, CBS, and NBC) flagship morning and evening newscasts over the past two weeks, from Monday, November 7 through Sunday, November 20. During that time, these networks aired 13 different segments — 47 minutes and 31 seconds’ worth of content — advising their viewers on how to save money for the upcoming Thanksgiving holiday.

Yet not a second of airtime on any of the three networks was spent connecting the record-breaking inflation with the reckless spending and money printing that have resulted from the Biden administration’s legislative priorities.

During the November 8 edition of NBC’s Today, correspondent Vicky Nguyen recommended that viewers save on accommodations by seating Thanksgiving guests on “folding chairs from poker night” or “a bench that can seat three people.” She also suggested limiting beverages to “one drink per person, per hour.”

Above all, journalists looked for anything other than spending policy to blame for rising food costs. Across multiple newscasts, both ABC and NBC repeatedly mentioned the avian flu as a potential culprit for the high price of turkey. By contrast, there was just one mention (on the November 15 edition of Good Morning America) that according to the USDA, the virus had not impacted the sale of whole turkeys.

Russia also received some of the blame; NBC’s Today mentioned on November 15 that fertilizer costs were up as a result of the war in Ukraine, which in turn contributed to more expensive turkeys.

Taken by itself, there is nothing inappropriate about a news report aimed at helping viewers save a few bucks. Rather, the problem is with this sequence of events that has played out in predictable fashion:

3) Wealthy broadcast journalists tell their viewers to cook with spoiled milk before heading off to their own fancy Thanksgiving dinners, all while refusing to name the root cause of inflation in the first place.