Broadcast networks NBC, CBS, and ABC have donated 75 hours of free air time to Democrats’ impeachment hearings, despite notably poor (and consistently shrinking) ratings. Yet during President Clinton’s impeachment, these same networks could not be bothered to carry more than a few hours of independent counsel Ken Starr’s one-day presentation of the evidence against Clinton on November 19, 1998.

NBC’s live coverage during the hearings amounted to a whopping 92 percent (1,653 minutes, or 27.5 hours) of the total 30 hours of testimony. CBS ran special coverage for 84 percent of the hearings (1,517 minutes, or 25 hours), while ABC broadcast 75 percent (1,358 minutes, or 22.5 hours). These numbers reflect the coverage on network-affiliated stations in the Washington, D.C. area. 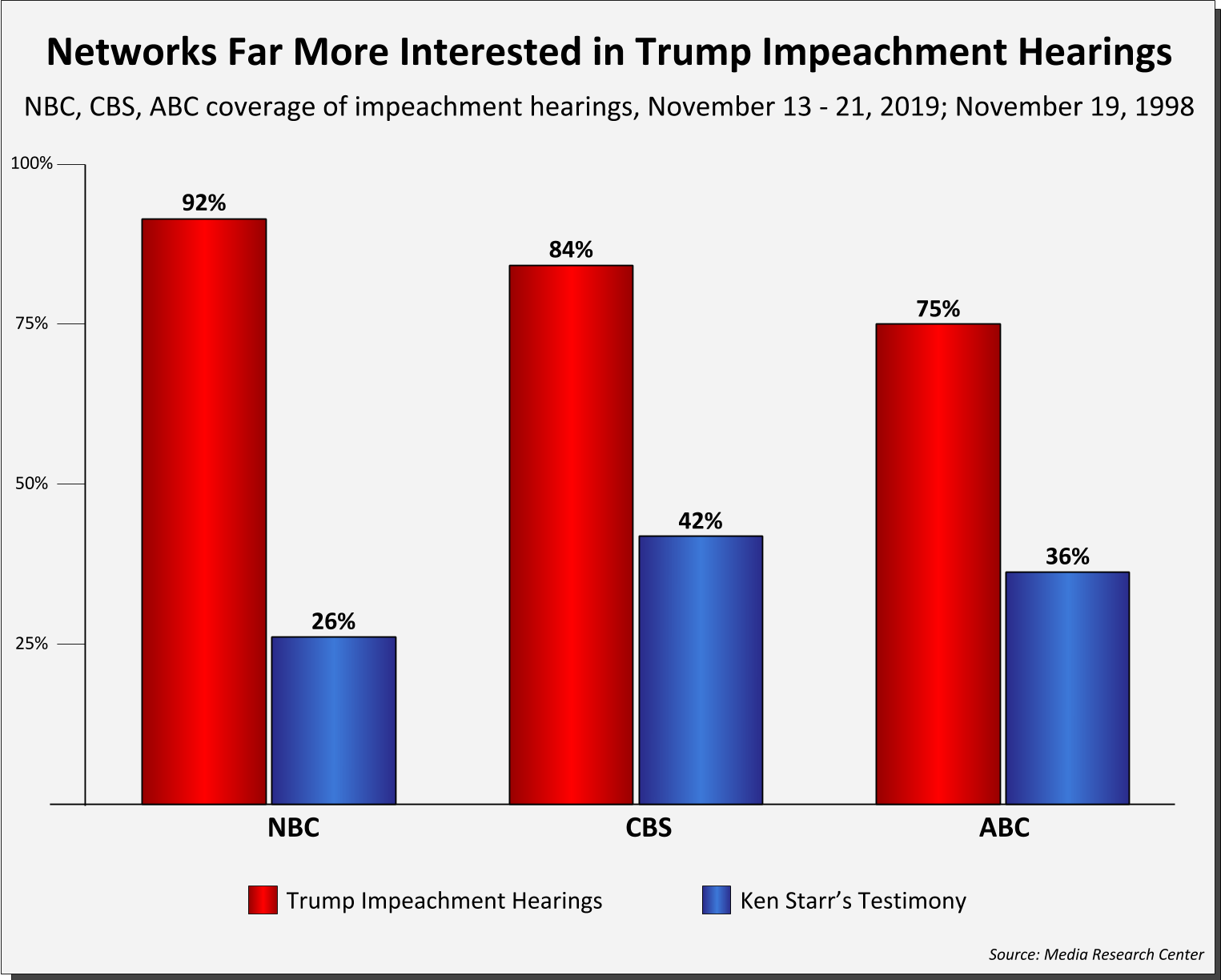 Over the past two weeks, broadcast networks bumped hours of regularly scheduled programming for hearings featuring 12 hitherto unheard of witnesses, many of whom had never even spoken to President Trump. Yet these networks were reluctant to cover Starr’s testimony back in 1998, even though that hearing relied on a single well-known witness with intimate knowledge of all the evidence being presented.

The media heavily downplayed the Clinton impeachment hearings, as exemplified by an Associated Press article published on November 20, 1998, titled, “Viewers Turn Off, Tune In, Drop Out.” The piece framed the networks’ choice to carry only sparse coverage of the Starr hearing as a service of their viewers:

On New York’s WNBC, Starr was abruptly replaced by a “Sally Jessy Raphael” episode about quickie divorces… Terry Dolly, a spokeswoman for WNBC in New York, said viewers interested in Starr could watch MSNBC. “We’re doing what we feel is of most interest to the majority of our audience,” she said.

The habits of viewers, meanwhile, have not changed; the hearings these past two weeks have had consistently poor viewership, and the number of Americans tuning each day has been shrinking. For example, NBC’s first day of impeachment coverage drew even fewer eyes (1.7 million viewers) than an average Days of Our Lives episode (2.12 million), which the network just recently put on hiatus.

These same broadcast networks that once were so attentive to their viewers’ wishes are now reluctant to turn away for even a moment from the current impeachment hearings. It would appear President Trump's election has rendered broadcast networks incapable of understanding what interests their own audiences.