Since 9:00 am ET Sunday morning, CNN and MSNBC have spent nearly four hours of airtime peddling dubious new charges of misconduct against Supreme Court Justice Brett Kavanaugh that allegedly took place when he was in college. The claims were first published by The New York Times late Saturday night.

The liberal cable networks' appetite for a fresh Kavanaugh scandal was so great that even after the authors were forced to issue a major correction to their initial story, their coverage was barely adjusted to reflect this new information.

MRC analysts found that from the first report at 9:42 am Sunday through 4:00 pm ET on Monday, CNN and MSNBC have spent a combined 233 minutes (excluding teases) peddling these dubious allegations since the Times first published them on Saturday.

MSNBC offered the lion’s share of the coverage, with a total of 166 minutes spent on the allegations themselves, but only six minutes on its pitfalls, including the alleged victim’s professed ignorance of the incident. CNN gave the story 67 minutes, with a mere three minutes on the confounding detail. 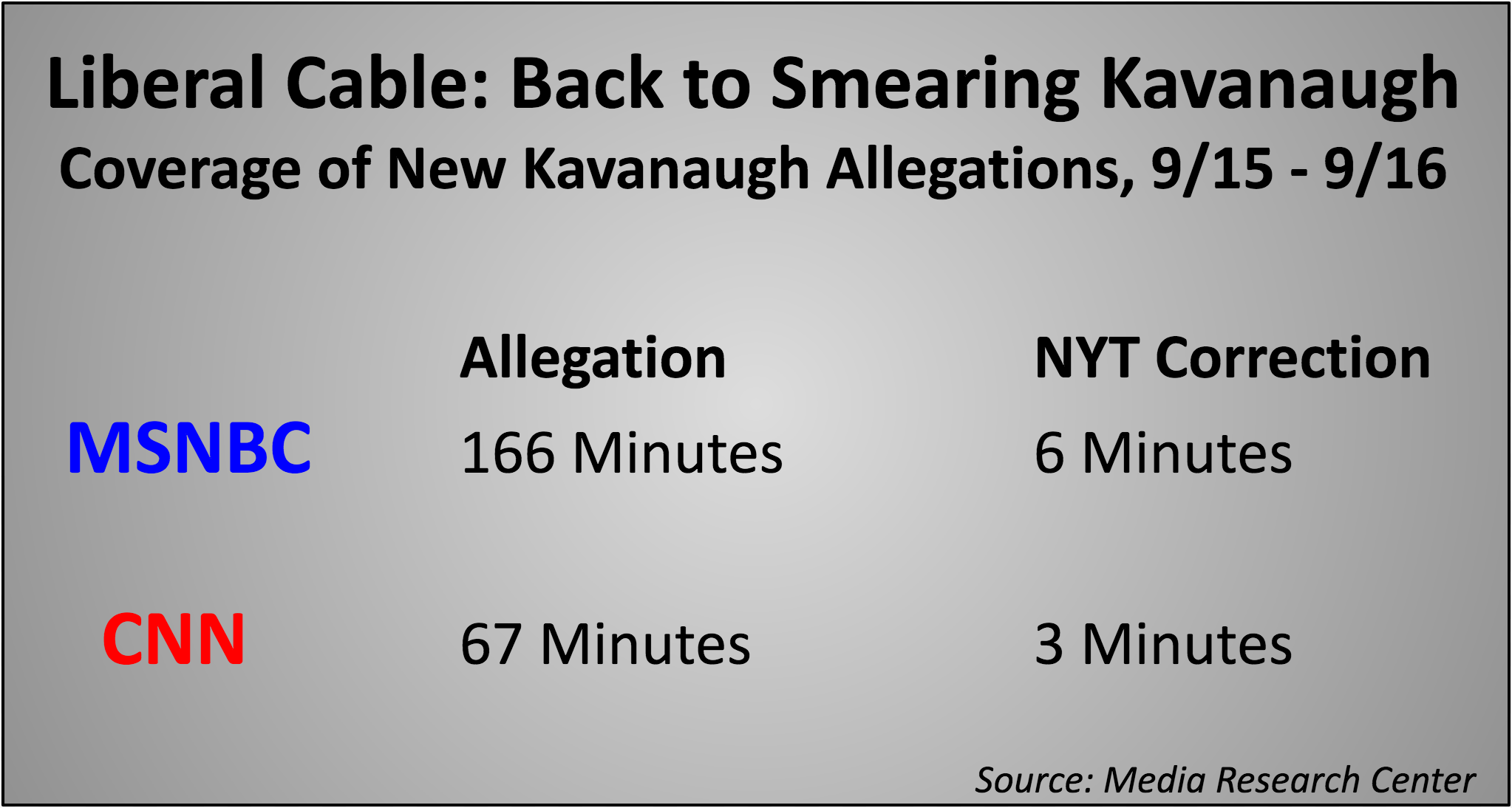 The Sunday Review piece in question, titled, “Brett Kavanaugh Fit In With The Privileged Kids. She Did Not.” was an excerpt from a book by New York Times reporters Robin Pogrebin and Kate Kelly.

Within hours after the article was published, it became clear that a key piece of information in the book was missing from the excerpt — specifically, the alleged victim’s inability to corroborate the allegations against Kavanaugh: 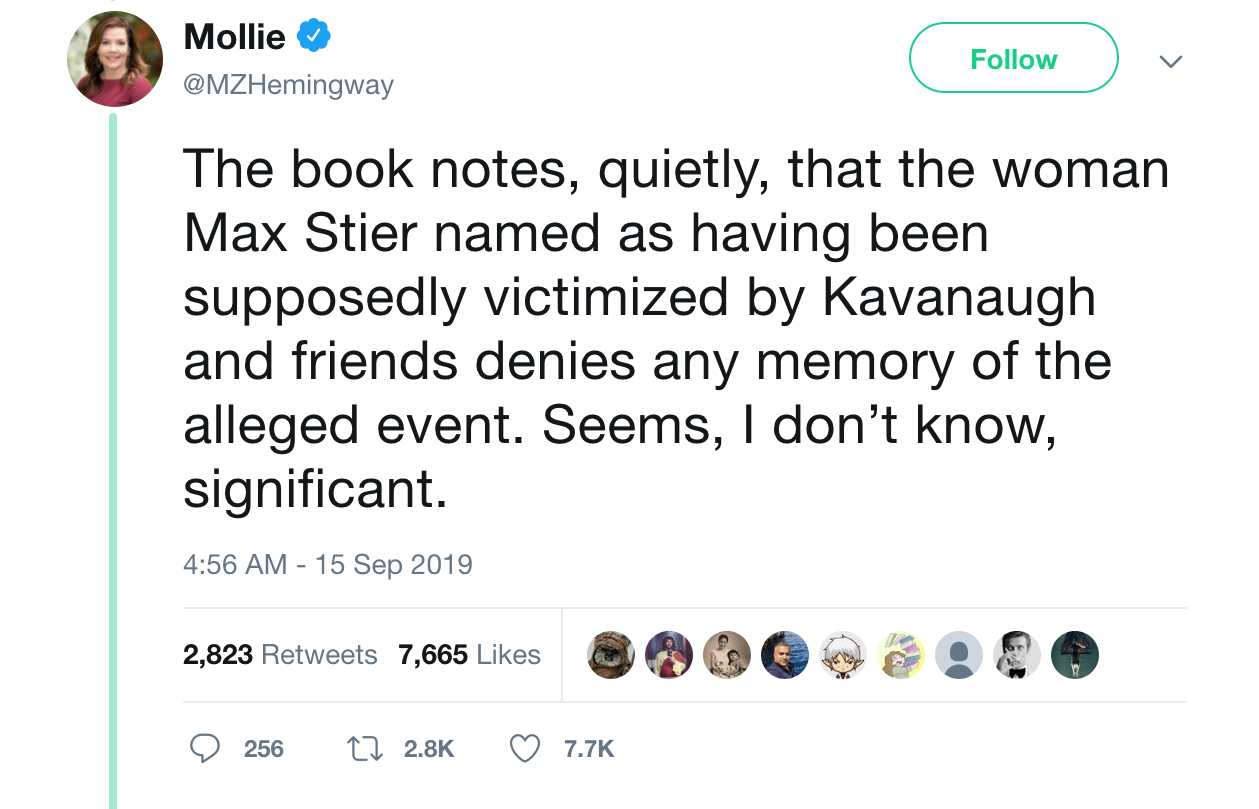 Yet throughout the weekend, no talking head on CNN or MSNBC acknowledged that the authors had consciously excluded this major piece of evidence. Instead, both networks continued to hammer away at the story even after the Times article was updated. Between 4:00 am and 4:00 pm ET on Monday alone, they spent a combined 95 minutes on the story.

Most hosts relegated the new, exculpatory information to a single sentence at the end of their news reports, before continuing on as though the update had never occurred. Additionally, neither network managed to spend even a second on the recent admission by lawyers for Kavanaugh accuser Christine Blasey-Ford that their efforts to prevent Kavanaugh’s confirmation last year were, in part, politically motivated.

Panel discussions on these networks were heavy on the rhetoric, but light on the details. For example, Sunday’s AM Joy panelist Jason Johnson smeared Kavanaugh as “the fifth guy in a gang rape” serving on the Court with “that same despicable misogynist attitude he has gotten away with his entire cowardly life.”

Hours earlier on Up, Business Insider’s Linette Lopez dubbed the 2018 FBI probe into Kavanaugh a “dog and pony show” that laid bare “the nasty reality” about “what white male privilege is in this country.”

The following day on MSNBC Live with Hallie Jackson, former Obama aide Christopher Kang offered this spin to help The Times save face after their embarrassing update: “The fact that the woman may have been drunk and not remembered the incident in particular doesn't mean it didn't happen.”

That same day on CNN, Inside Politics host Jon King lamely argued that those criticizing The Times for their misleading reporting were trying to “steer” viewers away from “the substance” of the piece: “The addition of the editor's note opened up to those, the President included, on Kavanaugh's side, and on the right, who think The New York Times is biased here. That's what they did: they just came right out of the box, ‘Why wasn't that in the original piece?’ to try to steer you away from the substance.”

Since Sunday morning, liberal cable reporters have routinely downplayed or ignored any piece of evidence that does not fit the narrative of Kavanaugh as a prolific sexual abuser. Regardless of whether this incomplete reporting was motivated by bias or the result of abject ineptitude, the result was an incredibly skewed recounting of events for millions of cable viewers.

Were The Times to publish a piece leveling equally serious accusations against a liberal Supreme Court Justice — regardless of their veracity — it’s unlikely that CNN or MSNBC would permit the story to dominate multiple days of programming.