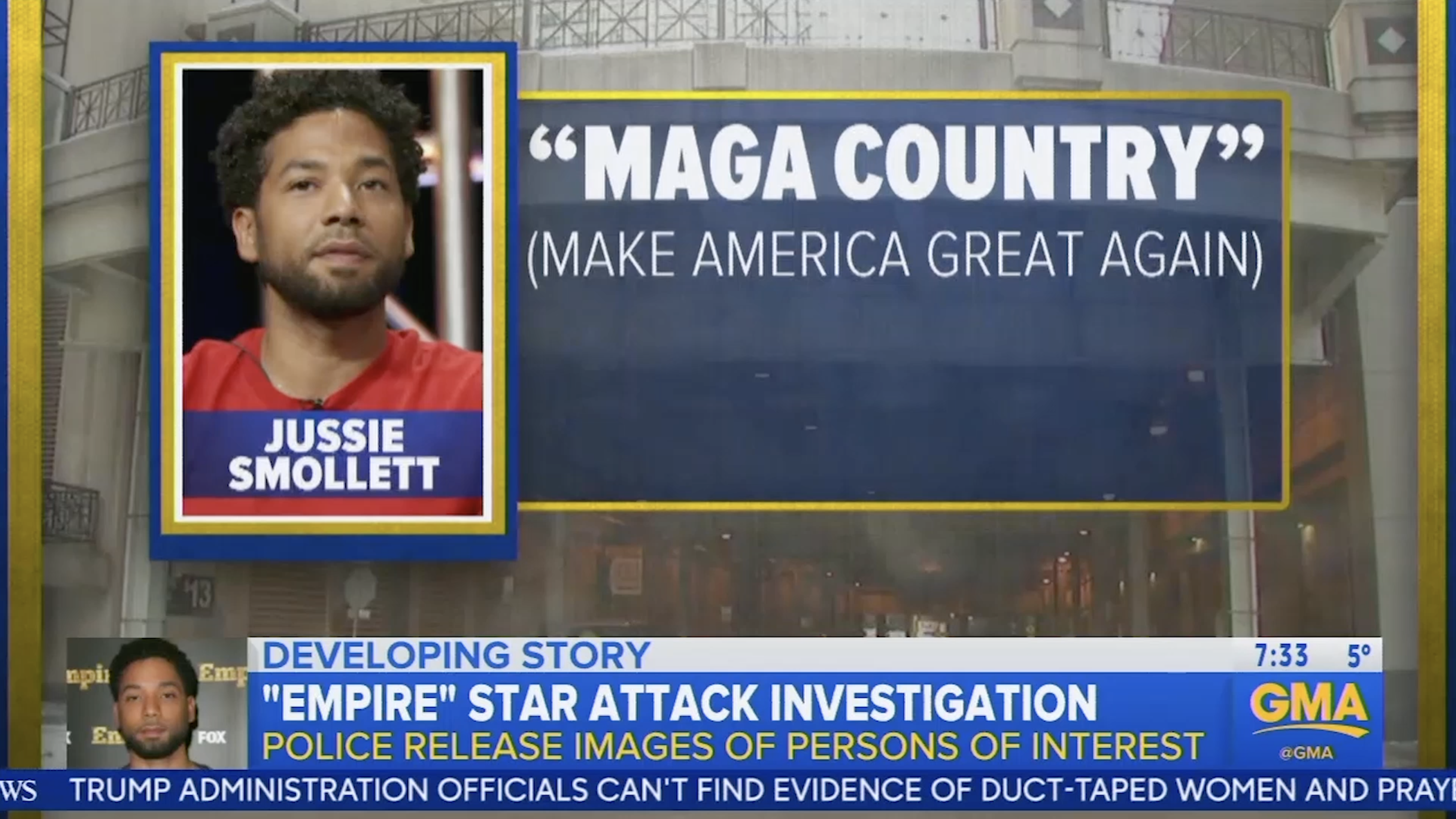 Amid the collapse of actor Jussie Smollett’s hate crime claims, Washington Post author Nana Efua Mumford worried in a February 17 piece that “the incident would be touted as proof that there is a leftist conspiracy to cast Trump supporters as violent, murderous racists.” But regardless of what reporters’ intentions were, their coverage of Smollett over the last two weeks constituted a prolonged word association exercise which linked the President’s 2016 campaign slogan to a (fictitious) hate crime.

Smollett’s claim that his attackers shouted “this is MAGA country” became the lynchpin of the ensuing coverage. Since the alleged incident was first reported on January 29, the three major broadcast networks (ABC, CBS, and NBC) have repeated the line “MAGA country” 28 times on their morning and evening news shows.

During an NPR interview on February 1, The Washington Post’s Jonathan Capehart explained the media mindset, saying the “MAGA country” allegation illustrated “the atmosphere of menace that African Americans in particular, and people of color in general, have felt since the advent of the Trump Administration.”

Once Smollett’s credibility had all but evaporated, Capehart used the same language to retroactively justify the media’s credulous reporting. During the 10:00 a.m. Eastern hour of MSNBC Live on February 18, he rationalized:

What he said happened to him sort of fit in with a narrative — not a narrative, but a reality, for a lot of people in this country since President Trump was inaugurated: that there is an atmosphere of menace and an atmosphere of hate around the country that made it possible for people to either readily believe or want to believe Jussie Smollett.

In a January 31 segment on CBS This Morning, correspondent Dean Reynolds emphasized that the actor was “known for speaking out against racism and bigotry,” adding, “he is also a frequent critic of the President.”

As more time passed, reporters began to gloss over the fact that Smollett had not even mentioned the “MAGA country” comments in his first conversation with the police.

Reporters also repeated unconfirmed rumors linking the alleged attackers to President Trump. For example on January 29, NBC News correspondent Miguel Almaguer reported during the 1:00 p.m. Eastern hour of MSNBC Live that police were looking for “two suspects, apparently wearing Make America Great Again hats, though that has not yet been officially confirmed.”

Since Smollett was exposed, the usual media suspects have twisted the news item into a “conservatives pounce” story. Meanwhile, right-leaning news outlets have endeavored to explain why the media seem to continuously fall for hate crime hoaxes. In a National Review piece, Andy Ngo blamed the rise of “victimhood culture,” which he termed “America’s sickness.” Others, such as PJ Media’s Debra Heine, theorized that culpable journalists might suffer from some combination of confirmation bias and plain old gullibility.

As with the Covington scandal – not to mention moments like this one on CNN – the Smollett coverage is further evidence that Trump supporters have become fair game in the liberal media’s rule book.

Recent polling suggests that the media establishment is suffering from a credibility crisis. Journalists like Mumford are right to be concerned; but concern alone will not rehabilitate them in the eyes of the same Americans whom they tarred — inadvertently or otherwise — with their reckless handling of the Smollett story.