‘No Crisis’? CNN and MSNBC vs. the ‘National Emergency’ on Our Border 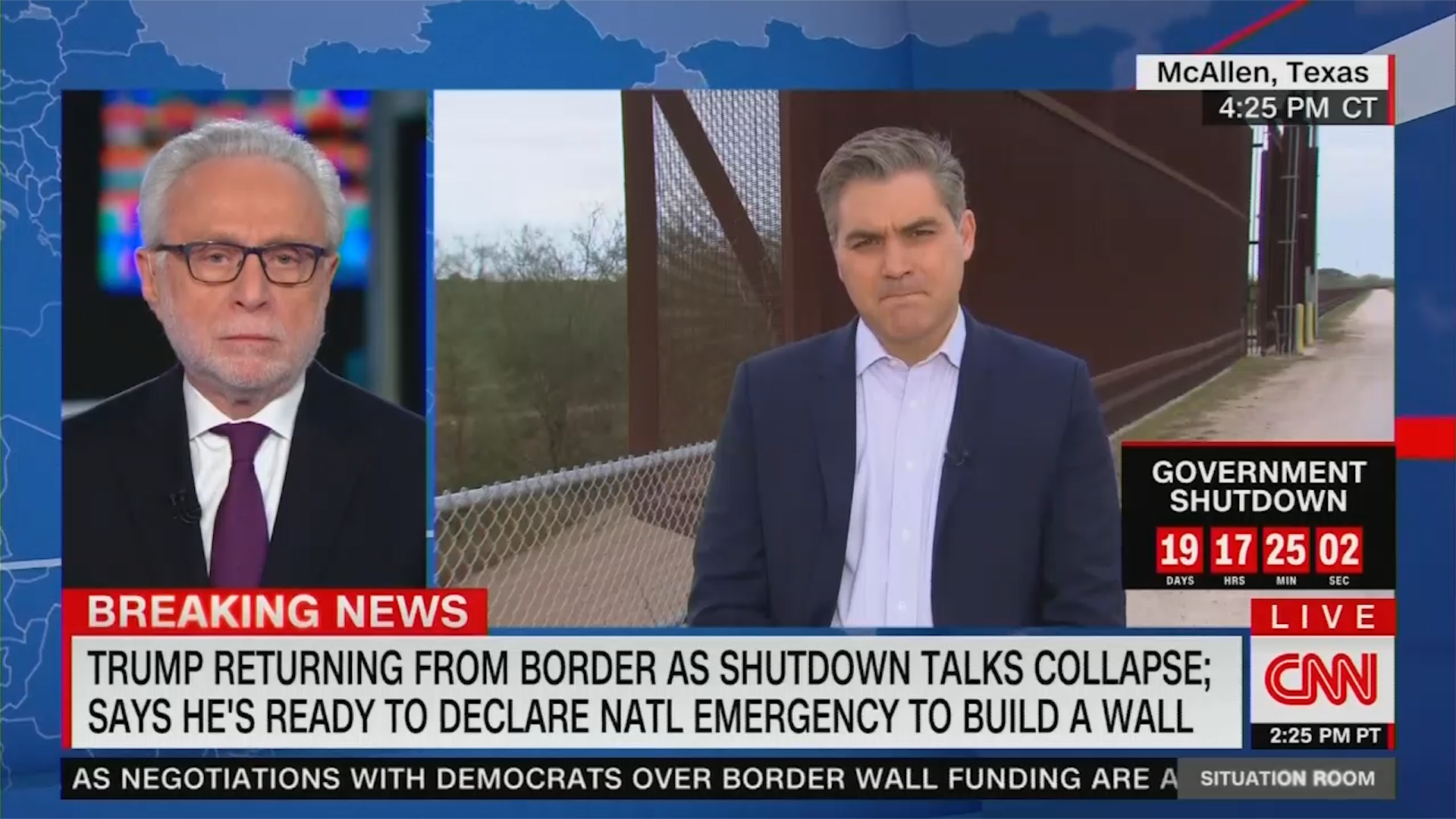 The stingy $1.375 billion allocated towards a border barrier in Monday night’s budget deal may mean it is inevitable that President Trump will soon declare a national emergency to ensure the construction of a wall. If this happens, expect CNN and MSNBC hosts to howl about the nameless “experts” who’ve supposedly deemed the project “an ineffective waste of money” designed to solve a “manufactured crisis” — because that’s exactly what they did during the 35-day government shutdown.

Missing from cable TV’s equation: the expert views of veteran border patrol agents, who contended that a wall was necessary and called the situation on the border “a crisis.” But during the shutdown, NBC and CBS actually took the time to present this important context to viewers.

On the January 24 CBS Evening News, Customs and Border Patrol (CBP) agent Fernando Grijalva shared his perspective with CBS correspondent Mireya Villarreal: “I’ve seen six different presidents the time that I’ve been with the border patrol, and this is the worst crisis I’ve seen.” Villarreal inquired, “You will actually use that word, ‘crisis’?” to which he replied, “Yes.”

Grijalva also voiced support for the wall: “Operationally, I can tell you that without a physical barrier, the border patrol — we have a very tough time succeeding.”

NBC Nightly News ran a similar segment on January 28, in which correspondent Gabe Gutierrez flatly asked Jeffrey Self, the acting chief of the border patrol in Tucson, Arizona, whether there was a crisis. “Yes, there is,” Self answered.

More broadly, the broadcast networks have been decidedly hostile to the wall, but these two pieces on CBS and NBC at least represent an offering of airtime to the other side of the debate.

The situation on cable news has been much more one-sided. Despite their firsthand knowledge of the situation at the southern border, no CBP personnel have been interviewed on either CNN or MSNBC in recent months. Instead, panel discussions on those networks have looked more like this:

On the night of President Trump’s January 8 Oval Office address about border security, MSNBC’s Nicolle Wallace complained: “The big scam of the whole address was that there’s a crisis; there’s not a crisis.”

On CNN’s The Lead that afternoon, Bill Kristol of the now-defunct Weekly Standard opined, “It’s a fake crisis, I think people know that.” The following day during the 5:00 p.m. hour of The Situation Room, CNN’s Jim Acosta stood beside a massive barrier in the border city of McAllen, Texas and declared without a hint of self-awareness: “No sign of a crisis, Wolf.”

Cable hosts were also adamant that a wall was no solution to the ostensibly non-existent crisis. “A wall won’t actually solve the problem of illegal immigration,” CNN’s Anderson Cooper asserted on his January 18 show.

That same evening on MSNBC’s The Beat, guest host Stephanie Ruhle suggested that even the President’s base believed a wall was unnecessary: “His base in Texas would say, ‘this is not a crisis, we don’t need a wall.”

Anti-wall sentiments have been ubiquitous on cable news since the beginning of the Trump presidency.  On January 27, 2017, CNN’s Anderson Cooper 360 featured a discussion between stand-in host Michael Smerconish and the author of a book titled Why Walls Won’t Work.

While neither cable network has hosted any CBP officials since the wall reappeared in the news cycle, CNN did air a live speech by a border patrol agent earlier this year. On Jaunary 4, President Trump appeared at a press briefing alongside National Border Patrol Council president Brandon Judd, who addressed the audience of irritated White House correspondents:

You hear a lot of talk that there are experts that say that walls don’t work. I promise you that if you interview border patrol agents, they will tell you that walls work.

Of course, no panelists on The Lead who’d been watching the briefing bothered to address Judd’s assertions. Bill Kristol dubbed the event “a ludicrous stunt with some union officials who endorsed [Trump].” Stand-in host Brianna Keilar agreed: “This is a stunt. I mean, this isn’t a briefing.” A conversation about the definition of a briefing ensued, and Keilar closed the segment with a poll suggesting the majority of Americans opposed the wall.

Those who get their news exclusively from these left-wing cable networks might get the impression that an army of oft-cited (but never identified) “experts” had unanimously declared walls useless. Yet whenever a CBP official goes on television, the reality appears to be quite the opposite. Given the apparent willingness of border patrol personnel to argue publicly (from a position of expertise) in favor of a wall, CNN and MSNBC's dogged refusal to even acknowledge their input resembles a deliberate attempt to shield their viewers from one side of an ongoing debate.