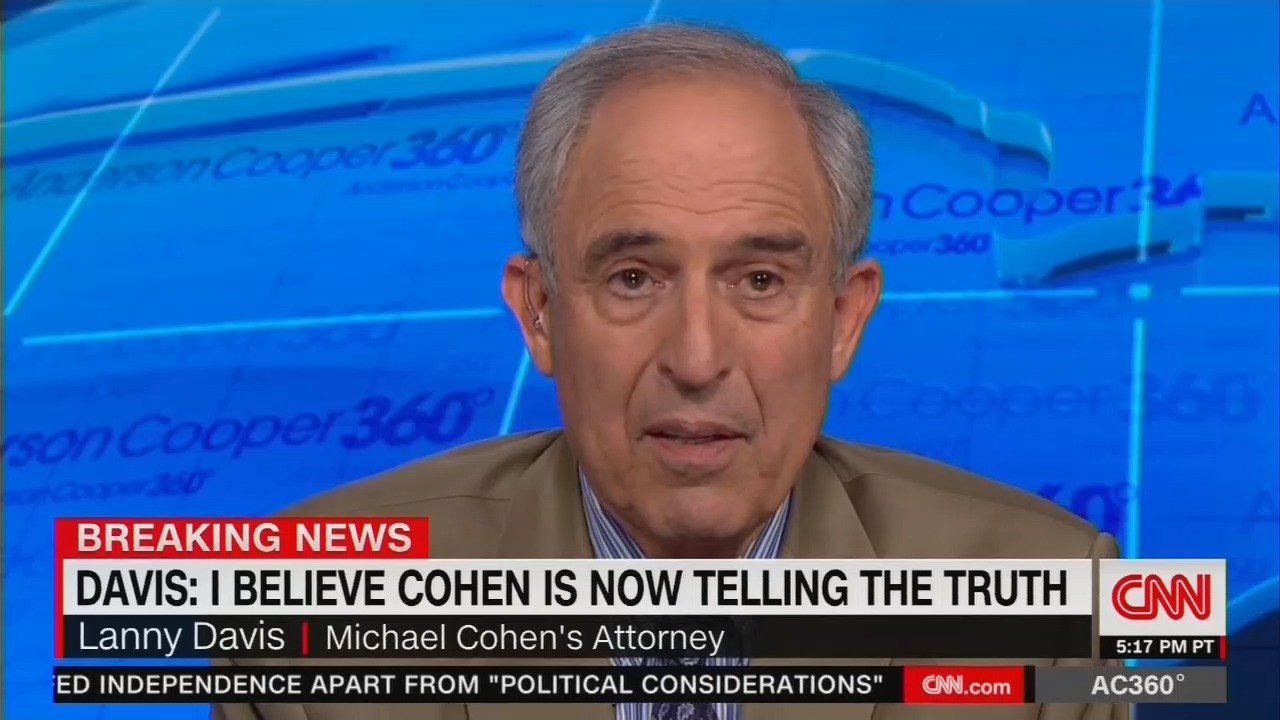 As of 1:00 p.m. Tuesday, CNN has not spent a second of airtime on Monday night’s revelation that Michael Cohen’s lawyer, Lanny Davis now admits to lying on-air to Anderson Cooper when he denied being a key source for a massively-hyped news item CNN broke last month.

Davis professed to Buzzfeed News that he was in fact a source for CNN’s claim that former Trump lawyer Michael Cohen had witnessed then-candidate Trump being informed about the infamous Trump Tower meeting before it occurred. Davis told Buzzfeed he had “unintentionally misled” Cooper last week when he stated: “We were not the source of the story.”

Despite Davis’s on-the-record mea culpa, the network has refused to inform viewers about the inconvenient facts that have undermined its “scoop.”

Here’s what we know so far:

■ On July 26, CNN’s Carl Bernstein, Marshall Cohen, and Jim Sciutto alleged on Cuomo Prime Time that Cohen would soon inform Special Counsel Robert Mueller that he’d personally witnessed Donald Trump Jr. telling his father about the Trump Tower meeting. They cited “sources with knowledge” of the matter. They also misleadingly reported that Davis had “declined to comment” – which implied that he was not a source.

■ In an interview on CNN’s Anderson Cooper 360, Cooper pointed out this conflict, asking Davis: “How can both those things be true? Either he knew about the meeting, or he didn’t know about the meeting.” At the time, Davis backed off the claim. But he also categorically denied that he was the source for CNN’s reporting: “I think the reporting of this story got mixed in the course of a criminal investigation. We were not the source of the story.”

But as we now know, Davis was in fact the source for the July 26 story. Because that reporting by CNN conflicted with Cohen’s congressional testimony, this meant either Davis lied to CNN about Cohen regarding Trump’s knowledge of the meeting, or he inadvertently admitted to them that his client lied to the Senate Intelligence Committee while under oath.

It is not yet known which of those possibilities is the case – but neither one is being explored on CNN.

As for CNN, while their on-air talent remains silent, the network's spokesmen are refusing to back down: “‘We stand by our story, and are confident in our reporting of it,' a CNN spokesperson told BuzzFeed for a report Monday.”