CNN Analyst: Trump 'Obsessing' Over Pardoning Himself Means He Has a 'Guilty Conscience' 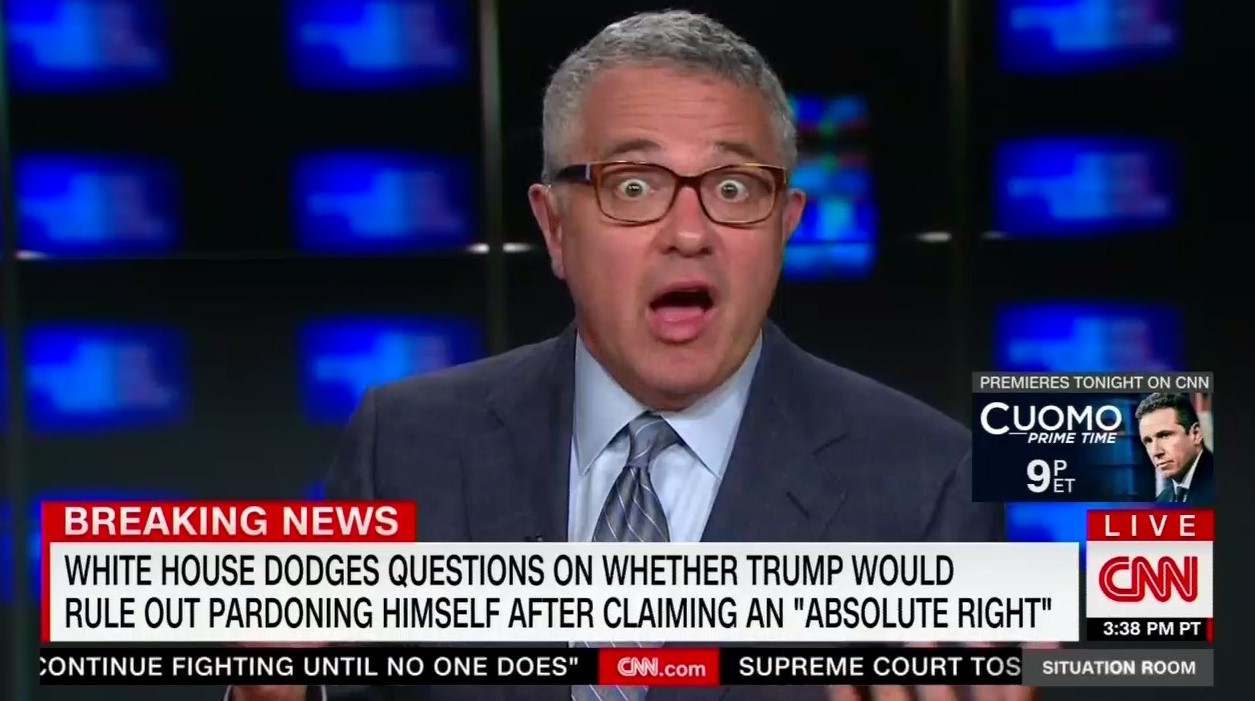 CNN legal analyst Jeffrey Toobin twisted himself into knots on Monday in an attempt to prove that President Trump was guilty of – well, something. While on The Situation Room with Wolf Blitzer, Toobin insisted that the President was “obsessing” over the idea of pardoning himself and inferred that that was itself evidence of guilt.

“You have to ask yourself why he is raising this subject,” Toobin began disingenuously. “Is there a guilty conscience at work? This is a bizarre subject for him to be tweeting about,” he continued.

Toobin's rhetorical question misleadingly implied that Trump was responsible for initially raising the issue of a potential presidential self-pardon. In fact, the topic had surfaced after the New York Times released a letter written by the President’s then-lawyer John Dowd to Special Counsel Robert Mueller back in January.

A portion of Dowd's letter had read in part: “It remains our position ...that he could, if he wished, terminate the inquiry, or even exercise his power to pardon if he so desired.” This line was particularly interesting to the media, who used it as a springboard to launch into a Sunday afternoon of frenzied tirades about potential future abuses of power by the President.

Ignoring reassurances offered by Trump lawyer Rudy Giuliani only a day earlier (“He has no intention of pardoning himself,”), Toobin continued with his wildly speculative analysis. “The fact that the President is obsessing about these issues – can he pardon himself, can he be indicted – I mean, what’s going on?” he asked with mock befuddlement. For bonus snark points, he added, “It’s just weird.”

Host Wolf Blitzer decided not to point out that the President was probably discussing the scope of his pardoning power because it had become a ubiquitous news topic. Instead, he asked CNN analyst Phil Mudd to discuss “the impact” that the President’s statements about the Mueller probe could have on “the American public.”

“I don’t think they understand how profound this is,” Mudd complained. After reminding viewers that he’d worked for the CIA, he went on to compare the Trump administration to a third-world dictatorship, and Toobin's mendacious arguments were left unchallenged.

To read a transcript of Toobin's full answer, click "expand" below:

WOLF BLITZER: Jeffrey Toobin, you’re our legal analyst. The President asserting he has the absolute right to pardon himself. His lawyers arguing the sitting president can't be inindicted. Are those real possibilities that they are preparing for now?

JEFFREY TOOBIN: I think it is an uncertain legal question about whether a president can pardon himself. That has never been resolved. You have to ask yourself why he is raising this subject. Is there a guilty conscience at work? This is a bizarre subject for him to start tweeting about. At the same time, the issue of whether a sitting president can be indicted is a live legal controversy. The Justice Department policy is that the president cannot be indicted. Kenneth Starr, when he was the Independent Counsel, he had a legal analysis that reached a different conclusion, that said a president could be indicted. It's never been resolved. But the fact that the President is obsessing about these issues – can he pardon himself, can he be indicted – I mean, what’s going on? It’s just weird.