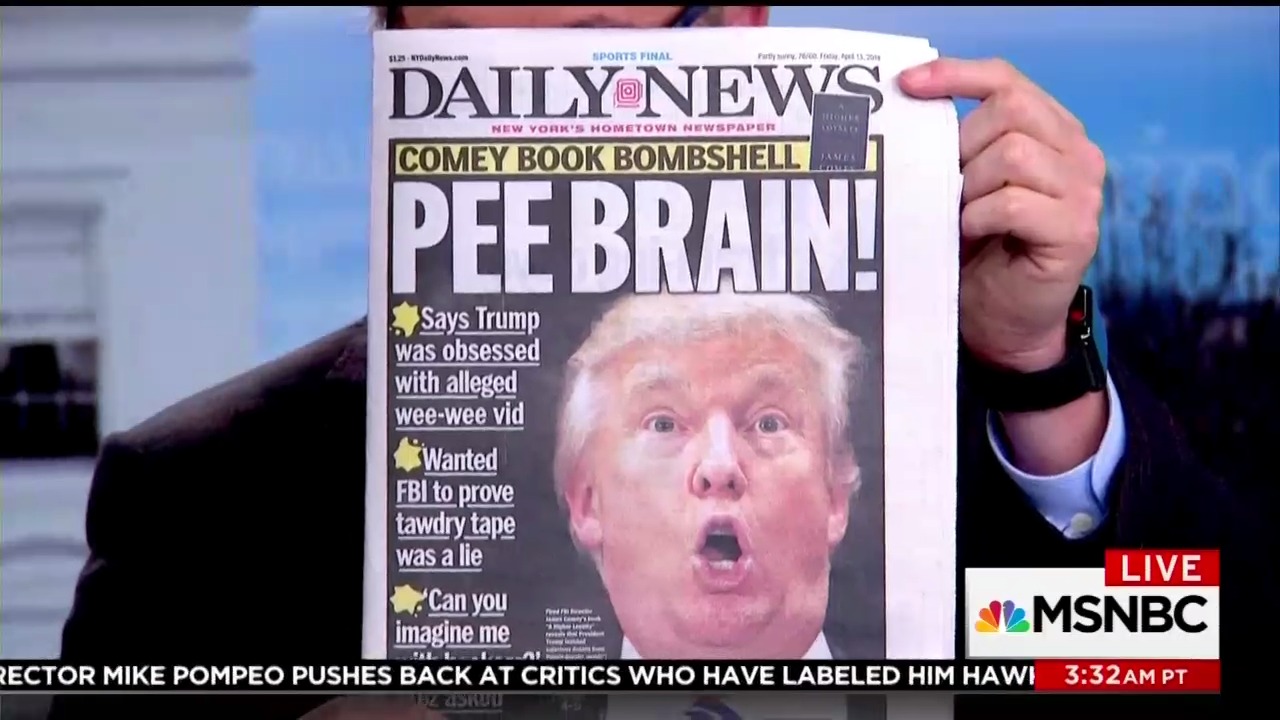 Predictably, Friday's cable coverage was flooded with talk of former FBI Director Comey's new book, which has cashed in on the highly profitable craze for Trump insider dirt. But on Morning Joe, BBC reporter Katty Kay broke ranks when she pointed out that the "pettiness" and "personal edge" of Comey's narration undermined the book's credibility.

Kay was joined on the panel by Associated Press White House correspondent and MSNBC political analyst Jonathan Lemire. Having already read the book in full, Lemire found himself at the center of much of the morning's discussion. During the second first-hour segment to focus exclusively on Comey's stylized recounting of his time in the Trump DOJ, Kay pressed Lemire to evaluate certain criticisms the book had received:

If Comey had written a book that did not have stuff about the size of Donald Trump's hands, and how tall he was, and whether he had been wearing goggles under the sun bed, would this have been a more effective take down of the President than it is at the moment? I'm just wondering whether that personal edge to it that reveals in Comey a – a pettiness almost, leaves the book and the message therefore open to a certain amount of fair criticism?

"Yeah," Lemire admitted, "I think Comey has left himself open to some criticism here."

Lemire noted that the former FBI Director had been criticized for grandstanding and attention-seeking by "people on both the right and the left."  However, he then attempted to explain away Kay's complaint that Comey had been overly judgmental of the President on a personal level. "This shows his eye for detail," he rationalized. "He's an investigator. And these little notes are sort of his way of recreating the scene."

Kay was unmoved by Lemire's weak justification. She pointed out that Comey's decision to include petty jabs at the President brought up otherwise avoidable questions about his credibility and his motive. "It just takes away the impartiality that he might have been able to summon from the nature of his job," she remarked.

Co-host Joe Scarborough quickly derailed the conversation before Lemire could respond. "There's more art coming," he intoned in a sing-song voice. He brandished the day's New York Daily News cover in front of the camera, which featured an unflattering photo of President Trump and a headline that read, "PEE BRAIN!" When Lemire atempted to continue, Scarborough stubbornly added, "Well, a lot of people are certainly talking about the Comey bombshell. So."

Though his motives cannot be known for certain, Scarborough appeared intent on shutting down this discussion, which had brought into question the book's validity. With the crisis safely averted, he put down his prop and yielded the floor for guest Donnie Deutsch to pontificate about something or other.