After months of high-mindedly criticizing skeptics of the Russia hacking narrative as conspiracy theorists on MSNBC’s Morning Joe, Mika Brzezinski decided to go off the reservation on Wednesday and deal in a conspiracy theory of her own. Fortunately, her co-host Joe Scarborough was there to change the subject and put the conversation on a more rational course – by comparing the Trump Administration to Al Qaeda. 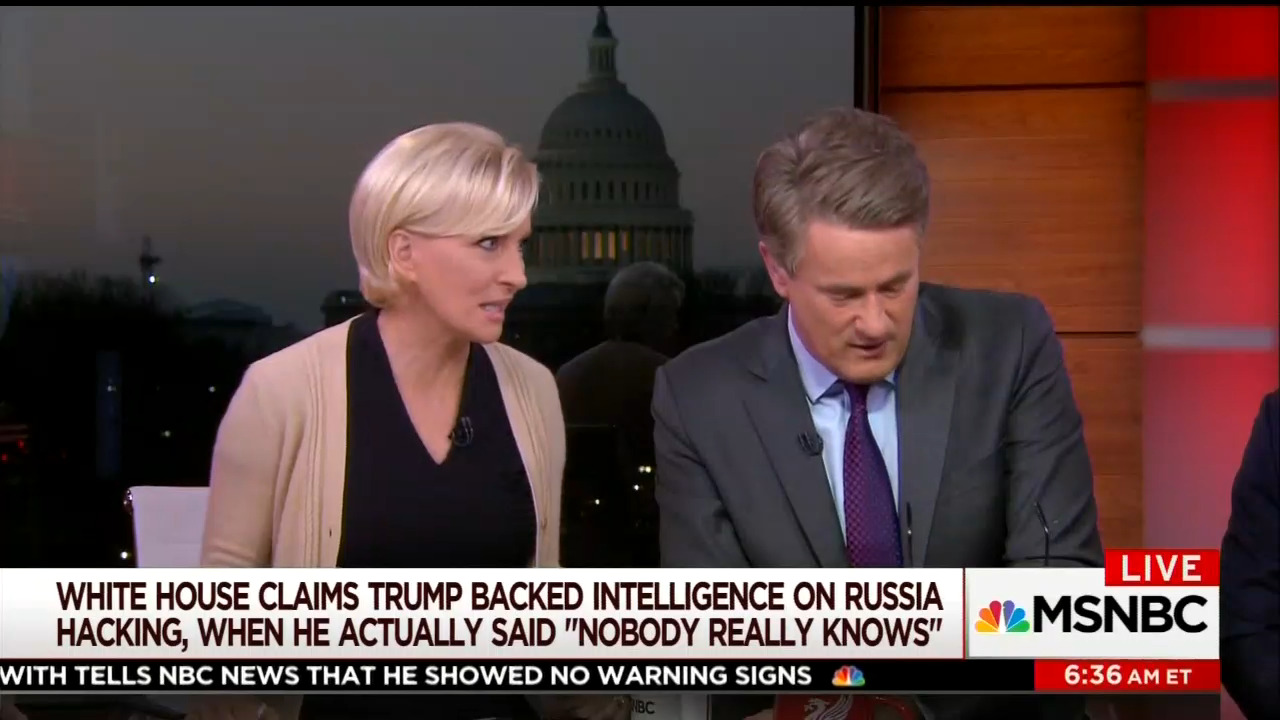 Scarborough made his absurd comparison while fruitlessly endeavoring to dissuade his co-host and fiancee from speculating about what dirt Russia must have on President Trump. Brzezinski inadvertently derailed the conversation when she quipped, “What does Russia have on Donald Trump? It must be fantastic.”

Sensing things might be headed in a bad direction, Scarborough repeatedly attempted to interject. But to his dismay, Brzezinski was intent on sharing. “It must be huge,” she marveled. “It must be so dirty. It must just be unbelievably wrenching to him.” Her monologue went on for some time.

“Is this the opening of Saturday Night Live?” Scarborough cut in. “Did I get transported to that set?”

But Brzezinski continued in earnest, “Can you imagine? He’s being driven crazy. Literally. What do they have on him?”

He tried again. “All right, Mika-boo,” he chided. Still undeterred, and more than a little frustrated that her co-host was not indulging her, Brzezinski played the relationship card. “You say what you said last night,” she demanded. “You said, ‘What do they have on him? It must be fantastic.’”

Finally, Scarborough wrestled the proverbial talking stick back from Brzezinski. In an attempt to run damage control on her embarrassing soliloquy, he began discussing the White House Press Secretary, at which point he dropped the following line:

But on Sarah Huckabee Sanders, I think anybody that holds that position probably feels much like number three in Al Qaeda after 9/11. It is a thankless job, and it never ends well.

The damage had not been controlled. Brzezinski grimaced uncomfortably, and the stunned silence of guest panelists Josh Earnest and Katty Kay gave way to nervous laugher. Scarborough pressed on and finally indulged his co-host’s wild speculation, offering the following explanation:

Listen. What I said last night, when we were talking – in private, alone, was that I listened to all these clips, and I just said, “Oh my god. We are going to find out in five, maybe ten years, exactly what Vladimir Putin has on Donald Trump.” And when we do, it’ll be like the end of a movie.

Now thoroughly titillated, Brzezinski could scarcely contain her excitement, “It’s all going to come out like a waterfall!”

This bizarre moment’s entertainment value should not distract from the seriousness of what it reveals. In addition to comparing the Trump White House to a violent terrorist organization, Scarborough and Brzezinski revealed on Wednesday the extent to which they believe Russian agents have compromised the United States government. Specifically, they believe that the President himself is being blackmailed by the Kremlin. Viewers of Morning Joe would do well to remember this fact, as it offers considerable context to their coverage of the Russia issue.