Imagine the horror of being told – by someone you suspect is a Christian – that not having sex is the only fool-proof method of birth control! Chilling, isn’t it?

Luckily, one heroic Canadian teen did something about it – striking a blow against having to hear opinions she doesn’t like. And the media is celebrating her for it.

Emily Dawson was horrified last year when she had to sit through what she said was an abstinence-only class taught at her public high school. She and her mother Kathy filed a human rights complaint against the instructor who allegedly taught Christian doctrine to students.

According to the Dawsons, the instructor was a pro-life activist because she came from the American based Pregnancy Care Centre, a Christian based organization. The Dawsons have accused the instructor of “slut-shaming” (the horror!), treating boys like “horn-dogs,” regarding children from single parents as delinquents, and – get your smelling salts ready – not wanting to discuss LGBT relationships.

They also accused the instructor of teaching “unscientific” information, such as the existence of gonorrhea strain that can kill you in “three days” and the ineffectiveness of condoms.

None of this was proven, by the way, and the Dawsons admitted there was no mention of God or Jesus (something must have just smelled Christian!). But Canada isn’t exactly a profile in couragewhen it comes to free speech these days.

Predictably, “public concerns,” (ie. media pressure) caused the Edmonton School Board to discontinue its use of instructors from the Pregnancy Care Center. The Superintendent of Sexual Health Education at Edmonton Public Schools reviewed the Pregnancy Care Center’s course and found it met “standards and expectations on every level – information was presented in a scientifically-sound way and students were observed to be comfortable in sharing their thoughts and feelings.” 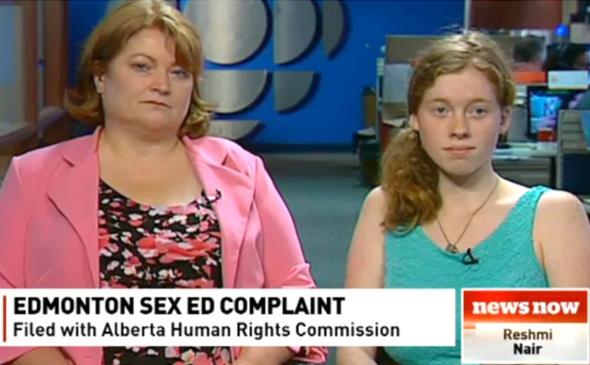 To the libertine left, ever vigilant against anything that smacks of religious prudery, celebrated the victory.

Jezebel, with customary class, declared that “The Pregnancy Care Center in Edmonton is basically another bullshit ‘crisis pregnancy center’ which provides a lot of biased, phony nonsense to young women regarding abortion and other reproductive issues.”

The writer added thoughtfully, “Fuck all the people who try to shove this crap down the throats of young children.” Hey Jezebel, you won. Why are you still outraged?

Salon told the epic tale of “How a teen’s legal action stopped a “slut-shaming” sex ed course from being taught in public schools.”

Huffington Post Canada covered the story and included a gallery of the “Funniest Sex-Ed Posters” with crude comments from the writer about the abstinence posters.

National Post writer Robyn Urback wrote, “If you want to learn abstinence, go to church. Get Christian sex-ed out of secular public schools.” She continued, “An abstinence-focused sexual education program will not offer the same wide-ranging, balanced approach to education that a class without an ‘agenda’ can deliver.”

Yes, scour the public school curriculum in Canada or America, and you’ll find it entirely uncontaminated by any agenda.