They continued by speculating whether or not Senate Majority Leader Mitch McConnell and the Republicans knew that this would play into Warren’s hands. Scarborough: “McConnell is smarter than this. I mean he had to be hearing from the White House or maybe from Sessions – He’s smarter than this. He knows he is playing right into her hands.” Their guest Steve Schmidt, a former strategist for John McCain, joined in: “Well, look. I – I also think it could be this. If you have to pick an opponent, and you certainly will have one, why not Elizabeth Warren? So I think a lot of Republicans look at her and say that if we could do anything to elevate the opposition voice–in the Democratic party, why not her? ” This comment struck a nerve with Brzezinski.

The former GOP strategist explained that this would only help Warren’s own base and would not affect anyone else: “ I mean the notion that she has like some broad appeal in the middle of the electorate. I mean I – we can differ on this but I just think it’s – delusional.” Brzezinski answered with: “ I think it’ll get broader if reality sets in.”

Scarborough and the former Democratic Congressman, Harold Ford Jr, agreed with Schmidt that this likely could’ve been a strategic move. Scarborough went as far to say: “I know if Donald Trump could select his opponent in 2020 right now, he’d pick Elizabeth Warren. So I think – Steve Schmidt – my dear buddy is onto something -- Donald Trump and Mitch McConnell wanted to elevate her to be the face of Jeff Sessions opposition. That is fact– You learn something every day.” Brzezinski was far from amused with the laughter and annoyed by the fact no one seemed to be fully agreeing with her. This prompted her to say: “We’ll see who has the last laugh”

The idea of Warren using the incident as a campaign talking point was circulated throughout the segment. At one point, journalist Willie Geist declared: “But you can hear-- Elizabeth Warren is running for Senate again next year. She is running for re-election. You can hear the campaign ad already being cut, right? When they say the senator will take her seat. No, the senator will not take her seat. She will stand up. So for her, it's good.”

Following this conversation, the speech Warren recited on Facebook Live was played and the hosts of Morning Joe could not stop praising her for it. Scarborough said, being told by the Senate to stop speaking was “ the greatest thing that could have ever happened to Elizabeth Warren.” Ford agreed, saying: “She had every right to -- do what she did that night and there’s no doubt -- They broke the rules by saying she violated the rules.”

However, he then criticized the strategy the Democrats have been using, “We have to realize we lost this race. And I don't think it's been fully accepted yet because we have not – we have not accepted it. You can tell because we don't have a real strategy to deal with this.”

Brzezinski immediately jumping in said, “No. More needs to be done with this but this was not  -- this was – How could she expect to be cut off like this? I think that she handled it perfectly. And quite frankly going on Facebook and very calmly saying, I was kicked off, I'm going to read this letter here, was well played.”Scarborough continuing the discussion said:

Sometimes when you go -- when you declare total war against a political figure, then you get them to actually bend over backwards to work with you and try to heal the wounds. But there are also other times when you declare total war against, say, Clarence Thomas and he and his wife remember forever, and will remember until their dying days, the scars that they felt during those hearings. Whether they were legitimate or not, I'm just talking about political strategy here. And I'm quite certain that they didn't radicalize Clarence Thomas, that may be the wrong word, but they certainly made him a more entrenched hardened conservative who never cared to ever reach out again after having his name dragged through the mud the way it was during those hearings. And that’s a risk. I guess that you take with Devos, with Sessions, with all of these people.

Scarborough went on to say, “If you are going to try -- you better take somebody down, if you're throwing everything you have at them. And if you can't, there may be a better way to do it.”  Brzezinski, still fuming from earlier, proclaimed, “Well we’ll never know because they cut her off and all she was doing -- quite frankly, her presentation was elegant. It wasn't unmeasured. It was invoking history.” Scarborough, trying to reason with her, explained the conversation was more about Senator Jeff Sessions and not about Warren.

Scarborough:”We are not talking about her – ” Brzezinski interrupted with, “Jeff session has a very, I'd say, controversial history.” The two hosts continued to interrupt each other arguing over whether or not the uproar over the Sessions nomination was warranted. Scarborough tried again to explain that it was unreasonable for people to assert, “How could he ever be Attorney General?! He is a bigot.”

He explained how confusing this was considering they could say this after “They’ve worked with him for all these years and –They’ve eaten with him every day and they’ve – cosponsored legislation with him every day. And they’ve stood in those stupid press conferences with the Capitol behind him... You don't go from a friends with a guy to suddenly calling him -- being a bigot.” Brzezinski and Scarborough continued arguing as the segment went on.

Attempting to get someone fully on her side, Brzezinski invited New York Times reporter, Jeremy Peters, to speak. Brzezinski seemed pleased with the comments he was making since he was more on her side than anyone else. Peters explained, “The problem with the way that Republicans responded to Elizabeth Warren is that it played right into Democrats' hands. I mean all they need now – All Democrats need now is for Donald Trump to tweet about this.”

As Peters mentioned the possibility of Trump tweeting about Senator Warren, everyone agreed this would be great for the Democratic base. Peters went on to say, “The image of two male Republican senators basically telling Elizabeth Warren, a woman, to sit down and shut up is going to reverberate so strongly with the Democratic base... But this is also going to reverberate just as strongly with the Republican base... It's the same kind of animosity and anger and hatred of Elizabeth Warren on the right that existed for Hillary Clinton. So this just drives both camps further into their corner.”

The further the segment went, the more infantile Brzezinski acted. Senator Marco Rubio, who had nothing to do with the conversation, was commented on by Brzezinski. She interrupted Scarborough and Schmidt to exclaim, “We never got to show little Marco wringing his hands!”

Scarborough was less than pleased with this comment. He replied saying, “No, we did. And his name is Marco Rubio! He is a United States Senator. Ok? Have I ever shown that man disrespect? You can show him some respect.” Scarborough and Schmidt continued but before the segment ended Brzezinski got her last comment in. “Let me just tell you, you all are underestimating Elizabeth Warren. And if Hillary Clinton had picked her as a running mate we might have a different story today.”

Here is a portion of the February 8 exchange: 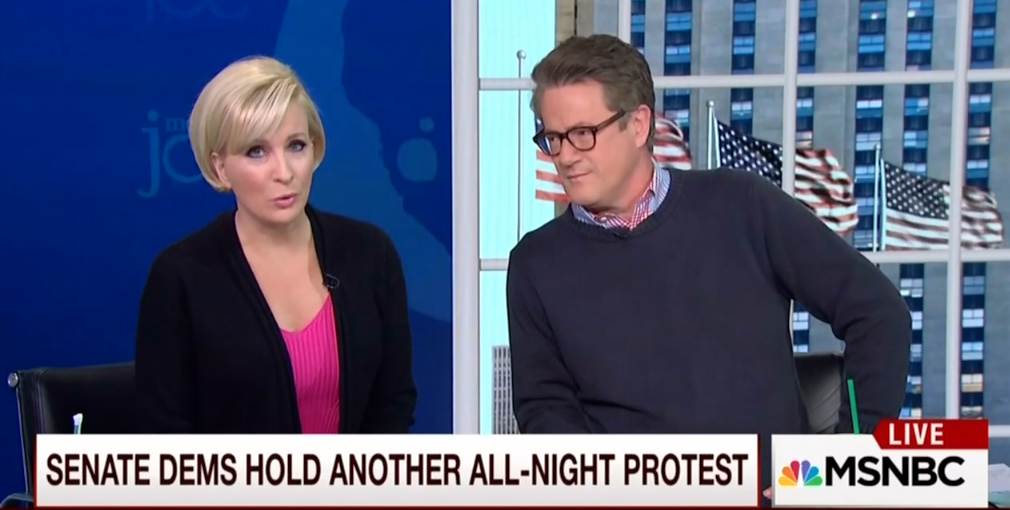 MIKA BRZEZINSKI: Well, also on capitol hill for the second straight night, senate Democrats launched an all-my talkathon. This time in protest of Senator Jeff Sessions’ nomination to be Attorney General. The move is nearly identical to the marathon of speeches against Betsy Devos that took place Monday night, but it’s what happened with Senator Elizabeth Warren that has everybody talking this morning. Senator Warren was barred from speaking on the senate floor after majority leader Mitch McConnell said she had broken senate rules. So here is what she did. This broke the rules. She read a 1986 statement from Senator Ted Kennedy when he led the opposition against Sessions’ nomination, at that time to be a federal judge. Kennedy calling Sessions a disgrace to the justice department. Warren then also read a letter that Coretta Scott King, wrote in 1986 to the senate judiciary committee, also opposing Sessions’ federal judge nomination. After that, Senator McConnell interrupted Senator Warren's floor speech to announce the rebuke.

MCCONNELL: The Senator’s impugn the motives and conduct of our colleague from Alabama as warned by the chair. Senator Warren, quote, said Senator Sessions has used the awesome power of his office to chill a free exercise of the vote by black citizens. I call the Senator order under the provision to rule 19.

MEDIATOR: The senator from Massachusetts?

WARREN: Mr. President, I am surprised that the words of Coretta Scott King are not suitable for debate in the United States Senate. I ask leave of the senate to continue my remarks.

MEDIATOR: Is there objection?

WARREN: I appeal the ruling --

MEDIATOR: Objection is heard. The Senator will take her seat.

BRZEZINSKI: Thank you. The senate voted 49-43 along party lines that Warren had violated the rule that no senator in debate can impugn another senator.

BRZEZINSKI: She’s now barred from speaking on the floor until after the senate wraps up the debate over Sessions. So she’s not allowed to speak or read letters from Coretta Scott king.

SCARBOROUGH: I -- I don't understand.

SCARBOROUGH: I don't understand this --