The media's obsession with anything that can be reported negatively on Trump is made so much worse by what they do not report. Networks like CNN refuse to cover stories that do not fit their leftist narrative. Tuesday morning on New Day, Senator Ron Johnson (R-WI) pointed out the blatant lack of coverage of Fusion GPS's ties to Russia and Debbie Wasserman Schultz's connection to criminal Capitol Hill IT workers:

SEN. RON JOHNSON (R-WI): Good morning, Chris. I think you're aware of the fact I'm not involved in any investigations at Senate Intel Committee, as well as Robert Mueller. So, I'll leave those capable individuals and committees to get to the final facts of these things. We need to find out what the facts are. Whether we need to take any additional action, but I'm not going to comment until we have their reports.

CUOMO: Not concerned by that report?

JOHNSON: Chris, there's so much out there being talked about right now. Kim Strassel wrote a pretty interesting article, who funded the Russian dossier on Trump? That's pretty interesting as well. What's happened with Debbie Wasserman Schultz? I still don't have any information on that. I think you could do all kinds of reporting. What I'm focusing on is how do we fix the messes of Obamacare? How do we get tax relief to the American taxpayer? You know, how do we actually grow our economy so we have greater opportunities for Americans?

The Fusion GPS scandal suggests the Russians were pushing fabricated dirt on Donald Trump through Democrats. Is that not newsworthy? Debbie Wasserman Schultz put the country's national security at risk and when investigations were opened, Democrats cried Islamophobia. That is newsworthy. Unfortunately, the coverage given to these two stories has been virtually nothing. Maybe a few seconds when the stories first broke and then silence.

Below is the full transcript of the interview:

CHRIS CUOMO: A new report in The Washington Post says President Trump dictated his son's initial and misleading statement on his meeting with a Russian lawyer. Remember, the White House through the president's counsel had denied he had any role. Joining us now, Republican Senator Ron Johnson of Wisconsin. Let's wade through some politics and get into policy as well. What do you make of this Washington Post report in light of the fact that the president's attorney said right on this show he had no role in drafting that statement. Now, The Washington Post said he dictated it?

SEN. RON JOHNSON (R-WI): Good morning, Chris. I think you're aware of the fact I'm not involved in any investigations at Senate Intel Committee, as well as Robert Mueller. So, I'll leave those capable individuals and committees to get to the final facts of these things. We need to find out what the facts are. Whether we need to take any additional action, but I'm not going to comment until we have their reports.

CUOMO: Not concerned by that report?

JOHNSON: Chris, there's so much out there being talked about right now. Kim Strassel wrote a pretty interesting article, who funded the Russian dossier on Trump? That's pretty interesting as well. What's happened with Debbie Wasserman Schultz? I still don't have any information on that. I think you could do all kinds of reporting. What I'm focusing on is how do we fix the messes of Obamacare? How do we get tax relief to the American taxpayer? You know, how do we actually grow our economy so we have greater opportunities for Americans?

CUOMO: Dysfunction in the White House and how we are led matters though, right? One of your fellow senators from Arizona, Senator Flake, wrote on op-ed saying that it's time for conservatives to stand up against this dysfunction, to realize that they own, in part, making Donald Trump president. What do you make of his op-ed?

JOHNSON: Well, I wrote my own op-ed about dysfunction in the United States. 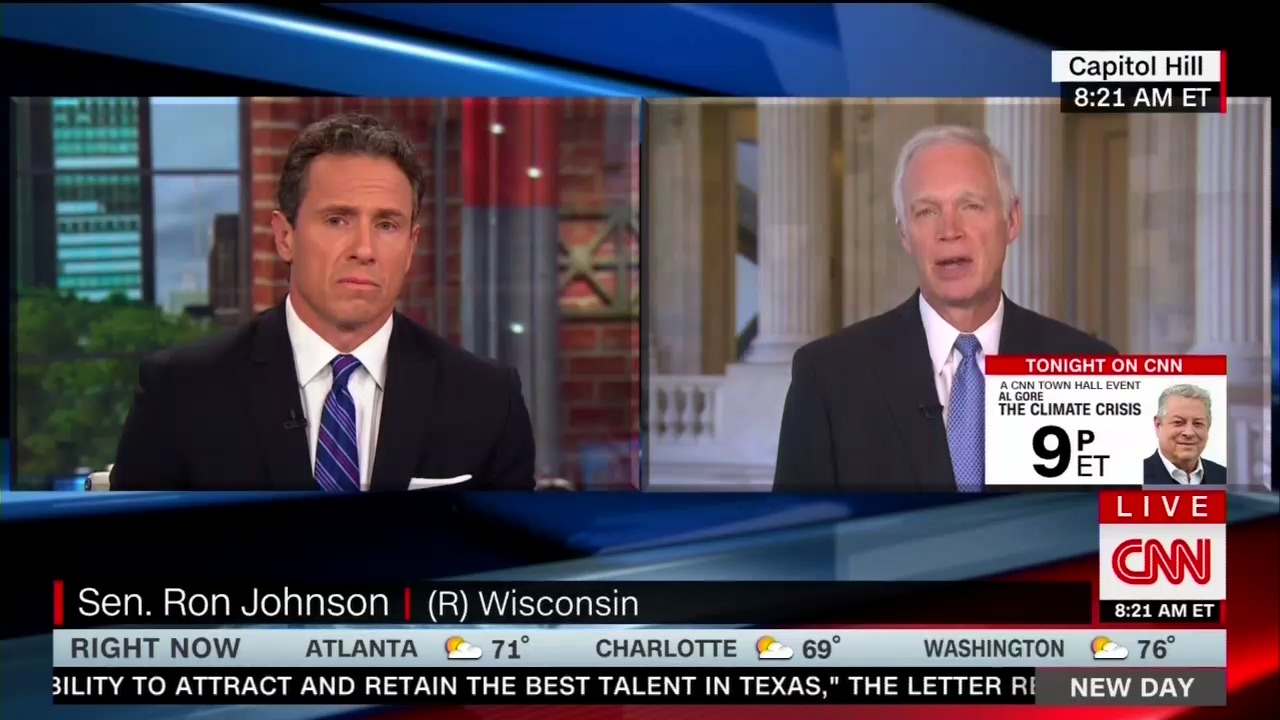 JOHNSON: Listen, I'm not a fan of Washington, D.C. It's one of the reasons I'm trying to devolve power away from the federal government to state governments and local governments where it's going to be more efficient, more effective, and more accountable. So, I'm not going to defend this process. I'm not going to defend this place. I'm here to limit the influence of the federal government over people's lives. And one of ways so do that, of course, though, is we need to kind of turn back the clock. We need to actually have the Senate function. For example, right now the Senate, a lot of people don't realize this, were primarily the personnel business and both parties have obstructed presidents trying to make appointments. I think we're ahead of the obstruction of past administrations and one of my simple proposal is let the committees primarily vet administration nominees, do a good job of it and just limit debate on any nominee that's sub cabinet or other than Supreme Court justices to two hours so we can actually turn our attention to the enormous challenges facing this nation. Right now, precious center floor time is being wasted on nominees.

CUOMO: Well, let's talk about the word wasted because is less time the right remedy for a toxic tone. Isn't it about garbage in, garbage out? I mean, isn't the bigger part that partisanship, tribalism, has been reward? And that that's why when the Republicans are the out party, they block everything they can. Your leader going as far as saying that's our plan is to obstruct everything and now you have the Democrats who are in that position. That seems to be part of their modus operandi. Isn't that about more than just how much time they get?

JOHNSON: So, I'm proposing let's not allow either party the ability to block a president being able to staff his administration. Let's not use Senate floor time that should be used to debate, for example, the debt ceiling, tax reform, how you fix this mess that is Obamacare, appropriation bills, you know, as we can start thoughtfully prioritizing spending. That's what we should be using the Senate floor time to debate those serious challenges facing this nation. All the foreign policy problems we're faced with today. So, right now, we are primarily using Senate time to really just have an empty -- go to the Senate chamber sometimes, you might have one senator talking to an empty chamber and the clock is running because we have to go through all these proceeds to get to a vote on a nominee. I say limit the debate time on the Senate floor to two hours per nominee and let the committees do their work.

CUOMO: All right. We direct people to Senator Johnson's op-ed. Read it. He gave you the headline of it, but there's some rationale in there you'll want to read as well. Let's talk about this business of the American people. Senator Graham says you guys in the Senate are going to listen to the president. You're not going to move on from health care. What do you see as most likely?

JOHNSON: Well, we can't move on from health care because Obamacare is a mess. You know, I wrote another column in "The New York Times" talking about the forgotten men and women. The people Bill Clinton talked about. They're busting, working 60 hours a week, their premiums have doubled, sometimes tripled, and the coverage cut in half. I mean, those are the people largely ignored in this whole health care debate because we haven't focused on premiums that have artificially skyrocketed because of the faulty architecture of Obamacare. So, anyway, this mess -- this problem isn't going away. Obamacare, these markets are collapsing. Premiums have sky rocketed. It's certainly within our ability to bring the premium us down. Maine did it. Let's take a look at some of the states in terms of what they did. Maine instituted a guaranteed issue pre-existing coverage. Their premiums doubled. They didn't repeal it. The supplanted it with invisible higher risk pools. Cut premiums in half. It's entirely possible if we're honest. If we're courageous enough to actually address the root cause of these problems.

JOHNSON: Well, what I've already announced is in my committee, Homeland Security and Government Affairs, we are the Senate Oversight Committee, we're not the committee of jurisdiction to write legislation.

JOHNSON: But we can certainly hold hearings to lay out the realities. So, Chris, I come from a manufacturing background, solved a lot of problems. There's a problem-solving process you go through, starting with information. In this alternate universe, if you get information it's at the tail of the process. We're going to thoughtfully go through the problem-solving process, to find the problem, get the information, do a root cause analysis and let's try and focus on achievable goals. I think if you lay it out that way, you know, my committee has got a pretty good track record, even under President Trump, we had 49 pieces of legislation signed into law going through the problem-solving process. So, that's what I'm going to do. That's my part as chairman of Homeland Security and Governmental Affairs. I hope other committee chairmen do the same thing.

CUOMO: Good. I mean, that was a big part of the criticism of this process which was that you didn't have these hearings. You didn't have people going through it the way you are now. So, let's see what it yields and let me repeat the promise. Senator, you are welcome to come on here to New Day with your charts, your facts, and your figures and sell what you think is the right proposal to the American people. It would be a great use of our time.

JOHNSON: I will absolutely do that. Look forward.

CUOMO: All right. You are welcome here always. Senator, thank you. Alisyn.

With the new chief of staff in the White House, could this be the reset the Trump administration needs? Is General Kelly someone that the Democrats can work with? What changes will he make? We have the Democratic whip, Senator Dick Durbin, joining us next on all this.