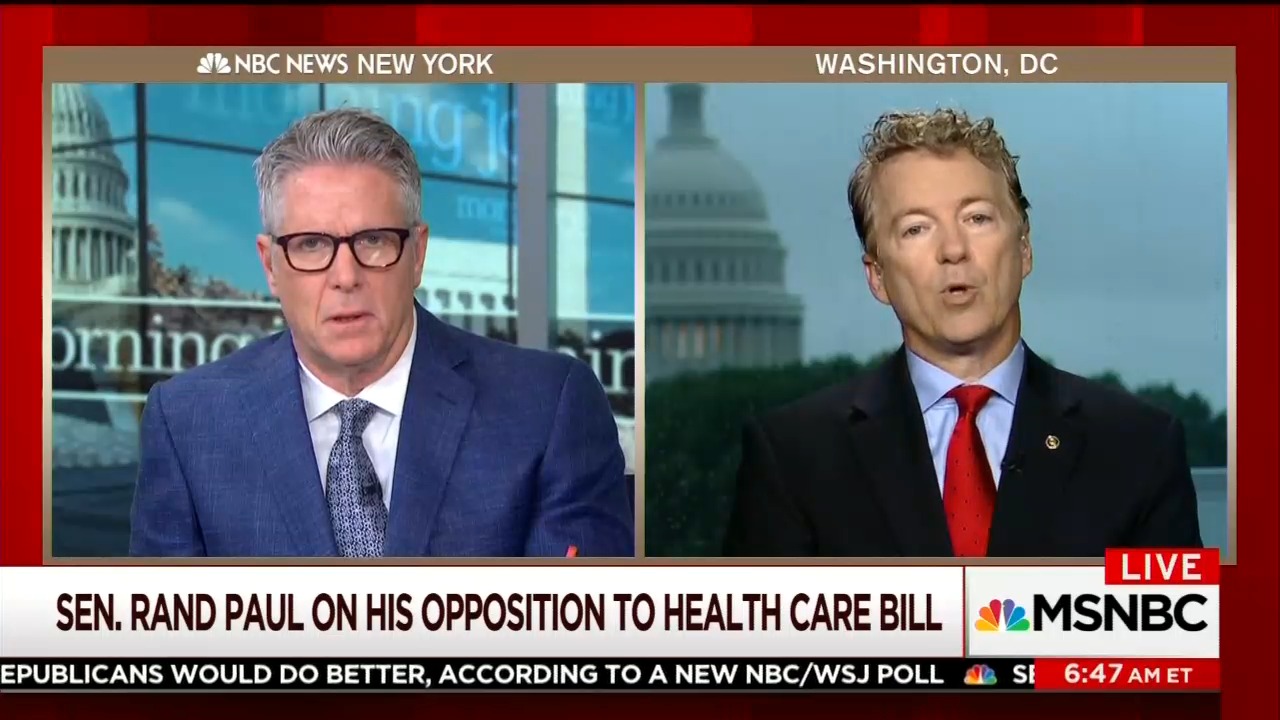 On Friday’s Morning Joe, MSNBC panelist Donny Deutsch pushed the typical liberal “tax cuts for the rich” narrative as he slammed the Republican health care reform bill: "The other side of the aisle will call this as a redistribution of wealth. Obviously, parties are given to hyperbole, but the reality according to the Center [for] Tax Policy is that 90 percent of the benefits in this plan go to families making $700,000 a year or more, the one percent. That is a fiscal reality." He demanded of Senator Rand Paul (R-KY): "How do you explain that to some of the people, uh, some of the elderly people, some of the middle-class people, so they let lower income people who are on the other side of that?"

To provide some context on the referenced study, The Center for Tax Policy, "is a joint venture of the Urban Institute and Brookings Institution," two liberal think tanks. The senator explained to Deutsch that the rich pay more in income taxes while the poor pay almost nothing. Therefore, tax cuts will always benefit the rich disproportionately:

I think this is the same debate we get into anytime we want to cut taxes and it is really a math problem and people distort math to try to have partisan results. So, for example, the top one percent pay about 33 percent of the income tax. So the top 10 percent, those who make more than 200,000 pay 66 percent of the income tax. So if you have a flat tax and it’s sort of a math problem in the sense that if you cut taxes ten percent, the person who makes 100,000, 10 percent is a bigger number than 10 percent is at 10,000. But we also have a tax code that most people on the lower end are not paying much. Gradually over time we’ve taken people off the rolls at the very lowest end. So over 75,000 pay only four percent of the income tax. So really, it's disingenuous to say this is a tax cut to for the rich. All tax cuts will benefit people who pay more in taxes before the tax cut. That’s just a fact.

This was far too complicated for a member of the MSNBC family. Deutsch came back with this question: “But it is a four percent tax cut as far as on investments, in terms of payroll tax, it is a tax cut for the rich.” Paul’s answer had Deutsch shaking his head, leaving us to believe the marketing expert does not comprehend basic math:

Well, what it is is that the rich pay more in taxes and so any time you have a tax cut, even if you make it equal across the board and it's not like we're choosing people that have investment income. It just happens that this was a tax increase that was placed on the wealthy. When it comes off, it will be a tax cut for the wealthy, but the thing is the wealthy pay the taxes, so any tax cut, even if it is equal in percentage across the board will always benefit those who pay more in taxes.