CNN's Camerota Sympathizes with Valerie Jarrett: 'How Frustrating' is Trump? 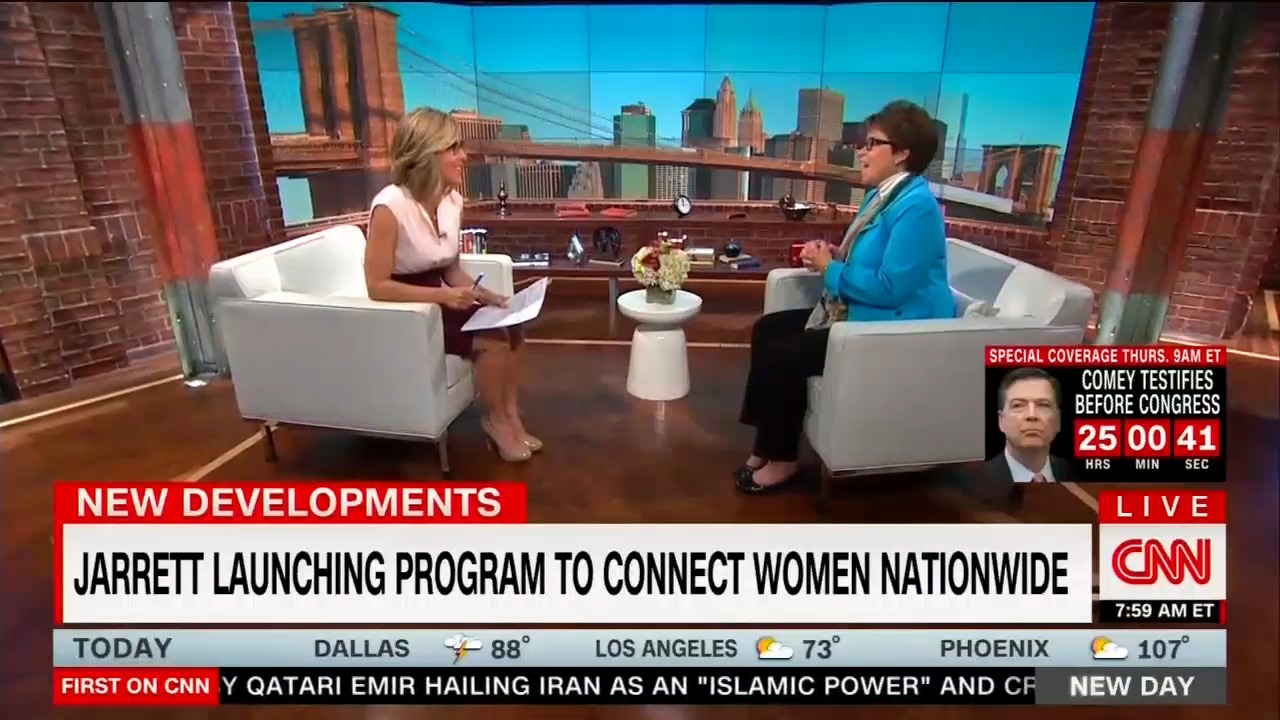 Camerota’s first question was a tough one: “So what is it like for you and President Obama to watch the Trump administration unfold?”

Jarrett used the opportunity to discuss Trump’s “devastating impact on the American people.” She cited the administration’s proposed budget and health care bill, saying that “23 million” people “would lose health insurance.” This allegation is incorrect as Guy Benson explained in a Townhall article. This CBO number assumes that ObamaCare will magically provide insurance for millions that it has so far failed to covered. The media has done their best to trumpet this number.

Jarrett then fretted over “the impact of not having women being able to go to Planned Parenthood, which provides vital services to women.” In reality, there are other organizations that can provide health services to women.

Camerota’s second question was perhaps too challenging for Jarrett to handle: “Is this as you expected it to go? Worse than expected? Better than expected?”

Jarrett quickly began to discuss President Obama’s wonderful achievements (“improving our economy, providing health care, ensuring our safety here in the United States is a top priority”) Instead of attempting to challenge these claims, the interviewer hit her with this much more journalistic question:

But in particular, for you to have to sit on the sidelines and watch some of the signature issues of President Obama's administration such as environmental regulations, the Paris climate accord, ObamaCare, be dismantled, how frustrating?

Her next question was just as hard hitting. After playing a clip of a speech President Obama gave, she held nothing back, going straight at Jarrett: “How's President Obama feeling?”

Camerota was not done, however:

I just want to show you the group of GOP senators, there’s 13 of them, working on health care right now. I'd like you to look at this picture. Which of these men do you feel represents women's health issues?

I’m not quite sure if Jarrett will come back on after that brutal interview. Of course, CNN conveniently left out that Jarrett’s daughter works for the network, covering Trump’s DOJ. No conflict of interest there.

See the June 7 transcript below:

ALISYN CAMEROTA:  Here with us is close friend and former senior advisor to President Obama, Valerie Jarrett. She also has a new initiative, the Galvanized Project, which we will get to as well. Great to have you here.

VALEIRE JARRETT: Thank you. It’s so nice to be in the studio.

CAMEROTA: Oh yes, it’s great to have you in the studio. That really helps. So what is it like for you and President Obama to watch the Trump administration unfold?

JARRETT: Well, Alisyn, I think it is the same as it is for the American people. We're all watching. I think we're obviously concerned about some of the steps that have been taken that have a such devastating impact on the American people. So, for example, the health care bill that passed the House, coupled with the budget that has been proposed will be devastating for the American people. 23 million who would lose health insurance. $800 billion in medicaid cuts. The impact of not having women being able to go to planned parenthood, which provides vital services to women. Two and half people in the course of a year. One in five women who in their lifetime used planned parenthood. There are lots of reasons to be concerned just focusing on that as an issue.

JARRETT: Well obviously, we were rooting for a different candidate and the reason why is that we thought that what President Obama was doing was moving our country forward in a range of different ways. Improving our economy, providing health care, ensuring our safety here in the United States is a top priority. And, so, sure, this would not have been our choice. But I think what's important is that the American people realize that our democracy is always hard, it’s always complicated. We take these zigs and zags and they have to be engaged. Our country is only going to be as good as the American people insist that it be.

CAMEROTA: But in particular, for you to have to sit on the sidelines and watch some of the signature issues of President Obama's administration such as environmental regulations, the Paris climate accord, Obamacare, be dismantled, how frustrating?

JARRETT: –But keep in mind President Obama mentioned yesterday about the Paris accord, certainly it is a setback for the United States to not have a leadership role, but I'm heartened to see so many businesses, mayors, governors led by the former mayor of New York, Mayor Bloomberg saying we want to still be a part of this, world compact and I think that gives us a reason to be optimistic.

CAMEROTA: President Obama spoke last night. He was in Montreal at an event. Let me play for you as well as our viewers what he had to say about all of this.

BARACK OBAMA: In an age of instant information, where TV and Twitter can feed us a steady stream of bad news, and sometimes fake news, it can seem like the international order that we have created is being constantly tested and that the center may not hold. And in some cases that leads people to search for certainty and control and they can call for isolationism or nationalism. Or they can suggest rolling back the rights of others.

JARRETT: Well what he went on to say is there is still this opportunity and optimistic chance for us to work together and that as we try to face the challenges of the world, that we shouldn't pull back. We shouldn't go into our comfort zone. We have to figure out ways of working with one another, and that's where the solutions lie.

CAMEROTA: Okay, that leads us to your Galvanized Program.

CAMEROTA: What is galvanized?

JARRETT: So last year, we had what we called the united state of women. Five-thousand women from across the country, countless other watching online, all coming together to say what can we do to empower women, to ensure that every young girl has that same opportunity as a young boy to grow up and achieve their dreams. So what we're launching are these galvanizing summits. And we’re going to start in my hometown of Chicago. [Inaudible] and I are going to host that one, bring together women and really talk about how can we empower them, take control of our lives, ensure for example that every young girl has that chance to pursue her dreams. Focusing on our workplace values, whether it's paid leave, equal pay, workplace flexibility, affordable child care, the issues that every working family cares about and how can we get women feeling empowered to be forces for positive change. And so we’ll start in Chicago. We will have six across the country. And the whole goal is on the ground creating this grass roots effort to really empower women.

CAMEROTA: Very quickly, I just want to show you the group of GOP senators, there’s 13 of them, working on health care right now. I'd like you to look at this picture. Which of these men do you feel represents women's health issues?

JARRETT: Well let's just say I think the group would be improved quite dramatically if you included some of the 21 women who are in the senate. I mean ask yourself how comfortable would men be if a group of women were making decisions about personal health care issues that they might face, whether it's a vasectomy, or circumcision, tests for prostate cancer. Do they want that solely decided by women? I don't think so. We make better decisions when the people who’s lives are impacted directly are at the table.

CAMEROTA: Thank you for putting a finer point on it with those examples, Valerie.

JARRETT: I thought I would. Makes the men squirm a little bit, but it does make the point.

CAMEROTA: Yes. Good morning everyone. Thank you very much for being here. Great to talk to you.