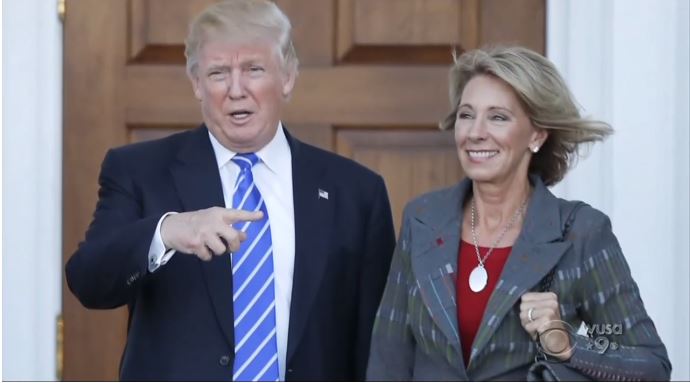 A Thursday article published on NBC’s pro-LGBTQ site NBC Out was beside itself, publishing a one-sided press release for “parents of transgender kids” and leaders after attending a meeting with Education Secretary Betsy DeVos earlier in the week.

Written by Mary Emily O’Hara (who’s Twitter bio advocates for a lesbian president), the lead paragraph employed the term “sex discrimination” in reference to students who identify as transgender, oozing:  “[F]amilies sat quietly in the office of Education Secretary Betsy DeVos to ask whether she would protect their kids from sex discrimination in schools.”

The next paragraph elaborated:

Parents of an elementary school child, a high school student and a 14-year-old victim of suicide each took about 20 minutes to speak with DeVos about their transgender children and how they are impacted by the federal government's guidance on Title IX protections.

The Trump administration recently reversed the Obama administration’s “significant guidance” on Title IX being applied to students identifying as transgender.

Most notably, the guidance included instructions that students could utilize the locker room and restroom that matched their “gender identity,” which meant anatomical boys who identified as girls could use the girls’ bathroom and locker room, and vice-versa. Under this guidance, federal funding could have been withdrawn from schools that failed to comply.

In an official release after the reversal, DeVos stated:

The guidance issued by the previous administration has given rise to several legal questions. As a result, a federal court in August 2016 issued a nationwide injunction barring the Department from enforcing a portion of its application. Since that time, the Department has not enforced that part of the guidance, thus there is no immediate impact to students by rescinding this guidance.

NBC OUT noted that since the reversal, the pending Gavin Grimm Supreme Court case “was remanded back to a lower court because it had been decided based on the Obama-era guidance.”

The NBC OUT article stated that DeVos is one of the individuals who signed the letter of reversal and the new administration’s action “caused panic among parents and transgender students.”

Katharine Prescott was one of the parents who spoke with DeVos on Wednesday, sharing the story of her transgender son Kyler, who committed suicide at 14 after complaining of discrimination at school and at a hospital, which Prescott later sued.

“My story is just an example of just how vulnerable these kids are,” Prescott told NBC News. “We're putting lives on the line.”

Of course, there was no quote or sentence(s) supporting social conservatives or an opposing viewpoint.

On that topic, what about the vulnerability and innocence of other students? All students should be protected from abuse, including those who identify as transgender, but their protection does not necessitate the normalization or accommodation of their lifestyle choice.

The article quoted Mara Keisling, the Executive Director of the National Center for Transgender Equality:

“While we appreciate the time Secretary DeVos took to meet with families today, she must recognize the incredible harm inflicted when they took away this critical guidance,” Keisling said in a statement emailed to NBC News. “She must recognize the human impact this has, and understand her legal and moral responsibility to protect transgender students, and to tell every school in the country to do the same.”

Keisling’s thinking represents a perverse conception of moral duty—one that demands permitting people to enter facilities designated for the opposite sex. Many Americans reject the nebulous concept of gender identity and support biologically based sex-segregation for certain facilities and programs. But this NBC OUT article never addresses any counterpoints to the LGBT movement’s agenda of social engineering and radical transformation.

Prescott told NBC News that transgender children and teens are at ‘very high risk for depression, self-harm and suicide.’ A 2015 survey of more than 27,000 transgender Americans found that 40 percent of trans adults had attempted suicide in their lifetimes — and 92 percent of them tried to take their own lives before the age of 25.

When Prescott's son Kyler passed away in May 2015, he was the third transgender teen in San Diego alone to die by suicide over a three-month period.

The article then concluded with a plea from Prescott for societal accommodation:

“We need to protect them and make sure they know they are welcome and respected at school, that they will not be outed as trans by being sent to some separate bathroom facility or by teachers using the wrong pronouns,” Prescott said.

“They just want to fit in. They do not want to stand out,’ she added. “We as a society need to have their backs. These are our children.”