If all you knew about the Federal Aviation Administration (FAA) reauthorization controversy was what MSNBC's Martin Bashir told you on August 3, you'd only know that it exists and that House Republicans are at fault.

Bashir claimed the thousands of furloughed FAA workers should blame Republican intransigence, but the truth is that the Democratic-controlled Senate let funding for the agency expire over proposed changes to airline unionization rules and cuts in subsidies to rural airports, including one in Sen. Harry Reid's home state of Nevada.

"Ironically, the latest showdown comes after the last showdown, in which Republicans went to the microphone multiple of times claiming their first priority was jobs, jobs, jobs," chided the former ABC "Nightline" anchor. "Surprising then that Republicans have chosen to leave town for a month, enjoying their congressional recess, while leaving thousands of aviation workers in the lurch." 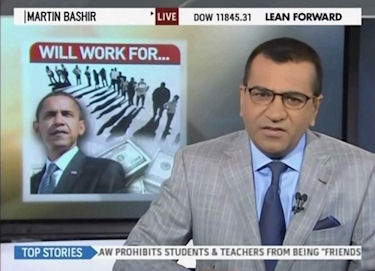 Despite the impression left by Bashir that Republicans chose to skip town instead of do their jobs, the Republican-controlled House passed a short-term funding bill before the August recess that would have prevented thousands of furloughs. But since the Senate adjourned without approving the measure, 4,000 FAA employees and 70,000 construction workers probably won't receive paychecks until Congress reconvenes in September.

While Senate Majority Leader Harry Reid urged his colleagues to pass the House bill before the month-long recess, Senate Commerce, Science and Transformation Committee Chairman Jay Rockefeller "put a stop to those plans when he insisted on a 'clean' bill from the House, which will not return to Washington until Sept. 7," according to The Hill.

Assailing "that GOP ploy," Rockefeller, not House Republicans, prevented a deal from being reached that would have averted the furloughs.

The Washington Post corroborated The Hill's reporting: "Instead [of accepting the stop-gap measure], the Senate balked and the resulting stalemate caused the FAA's funding authorization to expire."

The Philadelphia Inquirer's August 3 lede also echoed The Hill's account: "The Senate adjourned without resolving a funding standoff that has left the Federal Aviation Administration in partial shutdown for more than a week."

Quoting a barrage of Democratic lawmakers, Bashir excoriated "Republican governance by hostage taking," but failed to mention that the Democrats in the Senate could have ended the stalemate if they had approved the House's funding extension.

While Bashir let Rep. Steny Hoyer (D-Md.) get away with claiming Republicans are putting the "safety of our airways" at risk, even Transportation Secretary Ray LaHood, who criticized Republicans for the impasse, acknowledged during a conference call with reporters that "no safety issues will be compromised."

"Flying is safe. Air traffic controllers are guiding airplanes. Safety inspectors are on duty and doing their job. No one needs to worry about safety," reassured LaHood, according to the New York Times.

Another side to this story Bashir could have investigated had he not been preoccupied with blaming Republicans was that LaHood's assurances that safety inspectors are "on duty" conflicted with President Barack Obama's claim that, as noted in the transcript, safety inspectors were among those furloughed.

Then again, expecting Bashir to give the other side might be asking too much of the anchor who thinks Sarah Palin is a criminal and Mitch McConnell has dementia.

MARTIN BASHIR: Congress leaves Washington with 4,000 FAA workers left at the gate, 70,000 construction workers on standby, and $1 billion in federal revenue up in the air. Plus a debt deal more like a distraction, as Wall Street buckles. So, Michele Bachmann to the rescue?

SARAH PALIN, former Alaska governor: That is typical of our president, where it's blah, blah, blah.

BASHIR: Your birthday approaches, Mr. President. Make a wish. And we begin with the president weighing in on a shutdown of the Federal Aviation Administration. It's all over a labor issue, and as the president notes, it comes as Congress takes off a month-long holiday.

BARACK OBAMA, President of the United States: They left town without getting this extension done. Here's what this means: thousands of FAA workers being furloughed, including safety inspectors. It also means hundreds of projects across the country involving tens of thousands of construction workers being suspended because Congress didn't get it's work done.

BASHIR: Ironically, the latest showdown comes after the last showdown, in which Republicans went to the microphone multiple times claiming their first priority was jobs, jobs, jobs.

Rep. JOHN BOEHNER (R-Ohio): Fixing our fiscal problems will, in fact, provide more confidence for employers in America, the people we expect to reinvest in our economy and create jobs.

Rep. ERIC CANTOR (R-Va.): Now is not the time for us to be considering tax hikes when there's over 9 percent unemployment and too many people out of work.

BASHIR: Surprising then that Republicans have chosen to leave town for a month, enjoying their congressional recess, while leaving thousands of aviation workers in the lurch. That's because Republicans refused to reauthorize the FAA without adding an anti-union sweetener to the deal. If the stalemate continues through Labor Day, the president emphasized the government could lose $1 billion in tax revenues from ticket fees in just weeks.

BASHIR: Well as long as the airlines get paid. Democrats said a clean extension could be passed in hours, if not for more Republican governance by hostage taking.

Sen. HARRY REID (D-Nev.): So many people desperate for work are being told they can't because once again, the House Republicans, rather than legislate the way we've done around here for a long time, feel they have the empowerment to hurt individual people. And that's what they've done.

Rep. STENY HOYER (D-Md.): It's irresponsible to hold hostage these people and our country and the safety of our airways, pending some petty political game.

RAY LAHOOD, Transportation Secretary: Come back to Washington. Leave your vacations. Just for a couple hours. Come back Congress. Help your friends and neighbors get back to works.

BASHIR: And while Republicans claim the impasse stems from subsidized regional airports in senators' districts, Democrats said today that the real issue is American workers and one major airline that wants to prevent them organizing.

Rep. JAY ROCKEFELLER (D-W.Va.): Most of the big airlines are unionized. Not a problem. One isn't: Delta.

REID: An anti-worker agenda of one airline, Delta Airlines, that's what this is all about, and that's what Republicans in the House said.