On his eponymous program today, MSNBC anchor Martin Bashir interviewed a liberal environmental activist aiming to scare viewers into believing that nuclear energy poses an imminent threat to the safety of the United States.

Bashir allowed a spokesman for Friends of the Earth, a left-wing environmental group, to declare nuclear facilities in California dangerous and unsafe, but neglected to report that the nuclear industry claims it has protocols in place to ensure safety.

"The fact of the matter is that what's happening in Japan could certainly have happened here," predicted David Moglan, director of the Climate and Energy Project for Friends of the Earth. 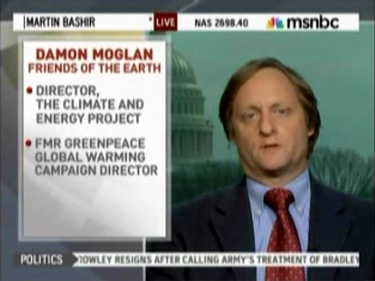 Bashir failed to acknowledge that Moglan is a former campaign director for Greenpeace, a liberal environmental organization that was labeled "environmental terrorists" by the Japanese government for attacking Japanese whaling vessels.

The former ABC "Nightline" anchor also refused to challenge Moglan after he made it clear that he takes umbrage with nuclear power in general and not just with the construction of reactors near coastlines and fault lines.

Instead of reporting both sides of the story, Bashir hailed Moglan's "extensive experience on nuclear issues" before lamenting that the nuclear industry builds reactors "so close to the water's edge."

If Bashir had done his job properly, he would have at least cited industry reports claiming there are safeguards in place to prevent meltdowns and plans drawn up to respond to emergencies.

One report by the Nuclear Energy Institute, a trade association for the nuclear industry, found that "nuclear power plant design and construction ensure the plants can withstand powerful earthquakes" and that operators conduct "thorough analysis and testing of the plant structures, systems and equipment, using simulated earthquake-induced vibrations."

Another NEI study showed "a variety of measures work together to protect public safety: the design and safety features built into the plant; the multiple layers of physical barriers that protect the reactor; and highly trained, federally certified professionals who operate the plant safely and know how to respond in the event of emergencies."

Wrapping up the interview, Bashir summarized the environmentalist perspective without giving a shred of recognition to the industry's view: "Damon Moglan, fearful expectations, thank you."

MARTIN BASHIR: There are 104 nuclear power reactors here in the United States. Operators are currently seeking permission to build up to 20 more. But in the wake of the disaster in Japan there are fresh concerns over the safety of these facilities here. Consider the San Francisco earthquake in 1989. It lasted 15 seconds, yet caused bridges and highways to collapse and destroyed entire neighborhoods. By contrast, the quake in Japan lasted 2:30. Now, look at this map of California, which shows two nuclear facilities, both on the coastline in the state most susceptible to earthquakes. Damon Moglan is director of the Climate and Energy Project for Friends of the Earth. He has extensive experience on nuclear issues and he joins us now. Good afternoon, Damon.

DAMON MOGLAN, environmental activist: Good afternoon, Martin, thank you for having me.

BASHIR: Let's take a look at these two photos for a moment. The first photo is the Diablo Canyon nuclear plant near San Luis Obispo, California. As you can see it's essentially a beach front property. The second image shows the nuclear facility at San Onofre, near San Clemente. Again this is literally a few feet from the Pacific Ocean. Is there any chance of either of these surviving an earthquake, should one happen, like that in Japan on Friday?

MOGLAN: Well, I think, first of all, Martin, we have to realize that to millions of Americans who have been seeing these horrific images and look at reactors right there in the ocean on a fault line, everybody is thinking we have to be mad. Why should we be having reactors there? And I think they're right. The fact of the matter is that what's happening in Japan could certainly have happened here. And I think we also need to realize that it doesn't take natural disasters to have terrible accidents. Three Mile Island was basically created by a series of human-created errors and Chernobyl was created bay series of human errors. It doesn't take a natural disaster of the magnitude of Fukushima and the horrific Japanese earthquake and tsunami to cause a terrible nuclear accident.

BASHIR: Why do we build these plants so close to the water's edge in a state that is known ostensibly, evidentially, for earthquakes?

MOGLAN: I'm afraid we probably need to use an ancient Greek phrase, which is hubris. I think that we really do not appreciate what's at stake and I think in an interesting way the American public may be better informed about this now than the nuclear engineers. They have been watching images for days of buildings exploding, of children being checked for radiation, and I think the public realizes there's a huge amount at stake and we shouldn't be building nuclear reactors on fault lines and right on the ocean in this way.

BASHIR: The head of the U.S. Nuclear Regulatory Commission appeared at White House press briefing and asked about the safety of U.S. plants. Here what happens he said.

GREGORY JACZKO, U.S. Nuclear Regulatory Commission: Bottom line right now we believe that the plants in this country continue to be designed to a very high standard for seismic and tsunami-type events. We will look at whatever information we can gain from this event and see if there are changes we need to make to our system.

BASHIR: Now, as I understand it, these plants here are built to withstand a magnitude seven but as we know the Japanese earthquake was a magnitude nine. Should he be as confident as he sounds?

MOGLAN: Well, I guess it's his job to sound confident if that way. I think it's unfortunate because I don't think it serves the public interest. I think the fact is that there are a lot of problems we need to be a lot more serious about. Over the weekend Representative Markey sent a letter to the president say he was concern we'd didn't have an agency that would be responsible for dealing with a nuclear accident in this country that just as we had in the BP situation we didn't have an agency clearly in charge and ready to deal with it. Mr. Markey was saying we don't have it here. The list of problems that we have is very long and I think public fear and anxiety about the technology is going force change of policy in our country.