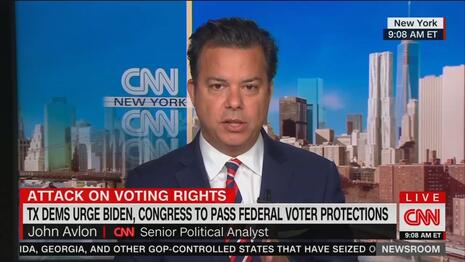 CNN senior political analyst and self-proclaimed "reality checker" John Avlon joined CNN Newsroom hosts Jim Sciutto and Poppy Harlow on Tuesday to allege that democracy is in great peril because Republicans are terrible and the election laws they are trying to pass in places like Texas are similar to literal race massacres.

Speaking of H.R. 1 and the filibuster, Sciutto, who also claims to have no opinion on the matter, asked, "are those measures DOA in the Senate as a practical matter or can Biden and Democrats make a turn here?"

Avlon, sounding more like a Democratic spokesman than a fact checker claimed, "after the filibuster killed a bipartisan commission to investigate the attacks of January 6th on our Capitol and our democracy, you got to wonder what -- why any reasonable person would believe that there's room to reason together in good faith on issues like voting rights."

After hoping that Sens. Sinema and Manchin will at least agree to filibuster "reform," he warned, "because whether it’s H.R. 1, the For The People Act or the John Lewis Voting Rights Act, which is more targeted and tailored, there’s no  question we're witnessing a sustained assault on our democracy, on voting rights in many states, Texas just being the latest example."

The "Reality Check" guy then put up a map on the screen that showed all the places where voting rights are allegedly under attack. The graphic was so disingenuous that it included Kentucky, whose new law was passed with overwhelming bipartisan support, signed by a Democratic governor, and was previously described by CNN as one "that expanded voting access."

Avlon then repeated himself, "So this is a sustained assault on our democracy going on right now, and it demands defense of our democracy at this time. So Democrats got to figure a way to get this through."

Harlow then escalated the rhetoric, beating Chris Cuomo to the punch on comparing these bills to the Tulsa massacre. "I keep thinking about this fight in Texas happening on the same day that we as a nation mark and recognize the massacre in Tulsa. And all of the civil rights and constitutional rights that the people of Greenwood were stripped of over that two days and what is happening now in terms of access to the ballot."

Historical estimates vary, but some historians estimate that nearly 300 people may have died during the Tulsa Race Massacre that resulted when a resentful white mob attacked the prosperous neighborhood of Greenwood. Nobody was ever prosecuted.

Massacres of prosperous communities in Tulsa, that were effectively written out of our history, show that structural racism is real. That we need a broader reckoning of our history that's fundamentally more inclusive and when there are attempts to shut down voting rights, we need to understand is not just in terms of the partisan politics of the moment, but the larger themes of American political history and how that is intersected with race throughout our history. We cannot hide from that. We need to confront it wide eyed and ideally together, finally.

CNN considers it "more inclusive" to blur today's voting bills into being comparable to a massacre of blacks. Naturally, the reality checker never provided evidence that these laws end up restricting voter turnout.

This comparison of Republican voting bills to historical race massacres was brought to you by CarShield.