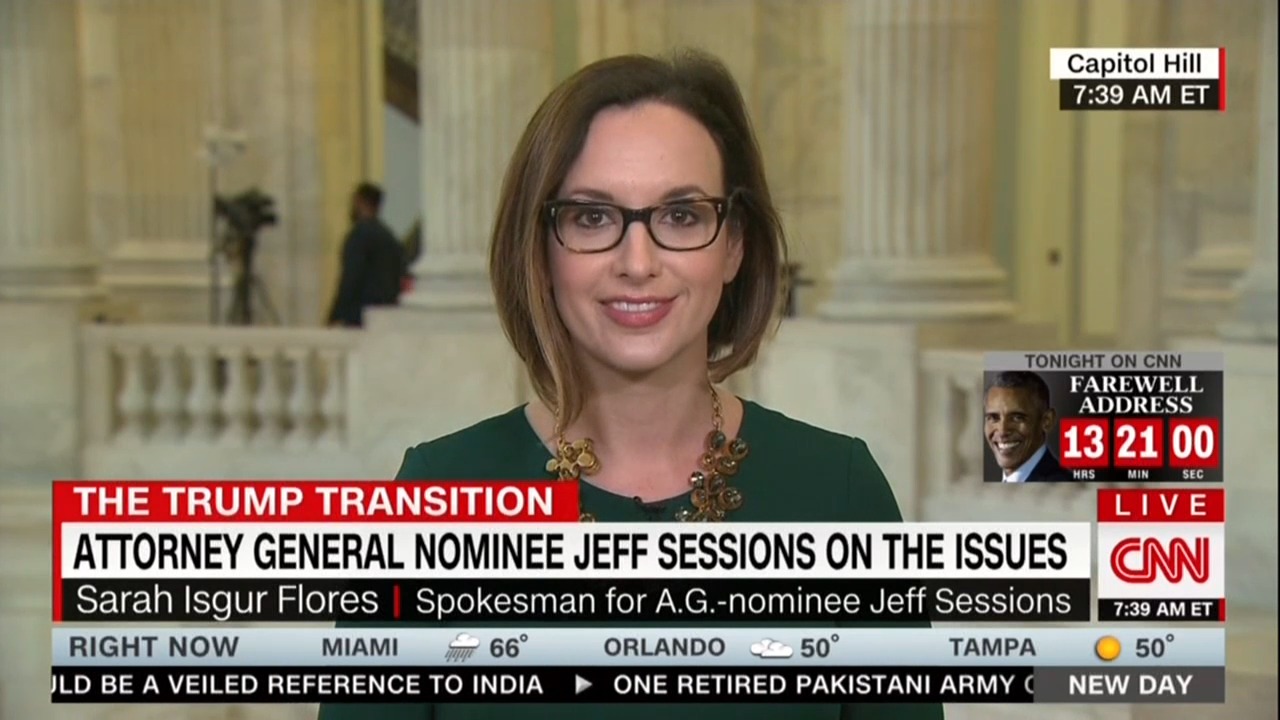 CNN confirmed to The Daily Beast Tuesday evening that they have hired former Jeff Sessions spokeswoman Sarah Isgur to lead the network's coverage of the 2020 Presidential Campaign. In addition to working at the Department of Justice during Sessions' tenure, Isgur has also worked for Ted Cruz and Mitt Romney, while also serving as the deputy campaign manager for Carly Fiorina in 2016.

The Daily Beast reported that CNN staffers did not take the news well. "Extremely demoralizing," "confused," "very bizarre" were some of the words used by CNN staffers who spoke with The Daily Beast about the hire. Outside of CNN, NYU Professor Jay Rosen asked if, "There weren't any journalists available."

The hire was originally announced by Politico, which said that, "Isgur has no experience in news but a long history as a political operative." CNN defended the move to network anchor Brian Stelter, who reported that executives have defended their decision by pointing to precedents such as George Stephanopoulos (who was coincidentally was reported to have signed a new four year, at $15-17 million per year deal with ABC on the same day the Isgur story broke), Nicolle Wallace, Dana Perino, and Tim Russert.

Left-wing commentators denounced the move. The Daily Beast condemned her Twitter account, which she has only tweeted from once since June 2017, for including,"fact-free invectives against liberals and repeatedly rails against the 'abortion industry."' The Daily Beast also attacked her for once approving of the Washington Free Beacon referring to her new employer as the "Clinton News Network" and claimed that she unfairly criticized a CNN chyron that once read, "'anti-gay, anti-abortion group hosts value voters summit,'" because according to article author Maxwell Tani, that was an "accurate description" of the Family Research Council.

Former Obama National Security spokesman and current co-host of Pod Save America Tommy Vietor, who tweeted that the move was "absolutely insane," demanded: "Why on earth would you hire a right-wing hack to oversee political coverage in 2020? You just gave every Democrat in the country a reason to doubt your objectivity."

Veitor's tweet was quote-tweeted by Free Beacon managing editor David Rutz who listed a series of conflicting interests in the news media including:

Rutz could also have included Tim Russert, Chuck Todd, and many others as part of the revolving door between politics and the media.

Media outlets freaking out over conservatives or even centrists has become a trend. The Atlantic hired and then unceremoniously fired Kevin Williamson after internal divisions and outcries from left-wing corners of the internet. When The New York Times hired Bret Stephens it got a harsh negative reaction for hiring someone who was not an alarmist on climate change, Nate Silver tweeted that, "The Truth Is More Important Now Than Ever, Except If You're Reading Our Op-Ed Page."

NYT staffers have also leaked internal chats to The Huffington Post that show a clear dislike of Bari Weiss and her "microaggressions." The internal reaction to the hiring of Stephens and Weiss led Vanity Fair to say the situation within The Times had led to a "Woke Civil War."

It is not a well-kept secret that the media is more liberal than conservative and there are two ways that media outlets have tried to combat this. One is to ignore it and claim that it is simply not true. Another would be for outlets to hire more conservatives to balance out their newsrooms and editorial pages, but the rank-and-file members of the media do not appear ready to give up their ideological monopoly, even if there bosses at least acknowledge the fact that change might be needed.