MSNBC's Harris-Perry Wonders If a White Like Dolezal Couldn't Be 'Trans-Black' (Audience Says No!)

There’s been a lot in the news about being transgender – thanks to Bruce “Caitlyn” Jenner.  Now there’s a new focus on being transblack – thanks to Rachel Dolezal.

Never heard of “trans-black”?  Apparently it’s when someone who is one race strongly identifies with another (in this case, “black”) – to the point they “believe” they are that race.  Enter Rachel Dolezal.  Dolezal is the “Jenner” of the new trans-black discussion.

Dolezal is a 37-year-old white woman who has been passing as a black woman for years.  She was the president of the Spokane NAACP who identified as black and claimed to have a black father.  Dolezal’s heritage is a mix of Czech, German and Swedish, and her parents recently called her out on her false claims.

Always one for a controversial discussion about race in America, MSNBC host Melissa Harris-Perry decided to jump in on the “trans-black” bandwagon, wondering out loud on her Saturday show:

HARRIS-PERRY: But is it possible that she might actually be black? The best way that I know how to describe this and I want to be very careful here…Because I don’t want to say it’s equivalent to the transgender experience.

Harris-Perry made these statements to Alyson Hobbs, author of the book Chasing Exile.  Hobbs agreed that it’s “absolutely possible” there’s “certainly a chance that she identifies as a black woman and there could be authenticity to that.” Hobbs believes the issue of Dolezal’s race is “multi-layered” and complex.

The Los Angeles Times  reports that Christina Greer, a political science professor at Fordham University, also echoed the same sentiments as Hobbs.  She told the Los Angeles Times that Dolezal “could be black” because she identifies as black, regardless of her heritage.

Greer says, “Race and ethnicity are fluid for a lot of people…There are a lot of non-white people raised with whites who identify more as white.” Greer then raises the question whether or not we can judge and say. “You are not allowed to pass as black.”

Are you serious? Then why bother having nationalities or race or gender or sex or whatever else someone decides to say is “fluid” for many people?

The thing is, no one seems to be addressing the real issue.  It’s not that Dolezal IS black because she “feels” she is black or “identifies” as black. The issue is obvious. Dolezal is a fake…a phony…what we called a “wannabe” in high school.  But Harris-Perry wanted this to be another moment where the public needs a lecture for their reaction, not the “trans-“ actor:

HARRIS-PERRY: Many discussions of Dolezal has been fueled by suspicions about her motivation, what is she trying to gain? This is rooted in an assumption of cultural appropriation, appropriation that confers material or reputational benefits to the white person for being adept at performance of black culture while not directly benefiting the community where the culture itself was born.

Other responses to Dolezal have asserted an unyielding biological determination. It says, if your parents are white, you're white. You can never be black. Blackness requires a proximate black ancestry. 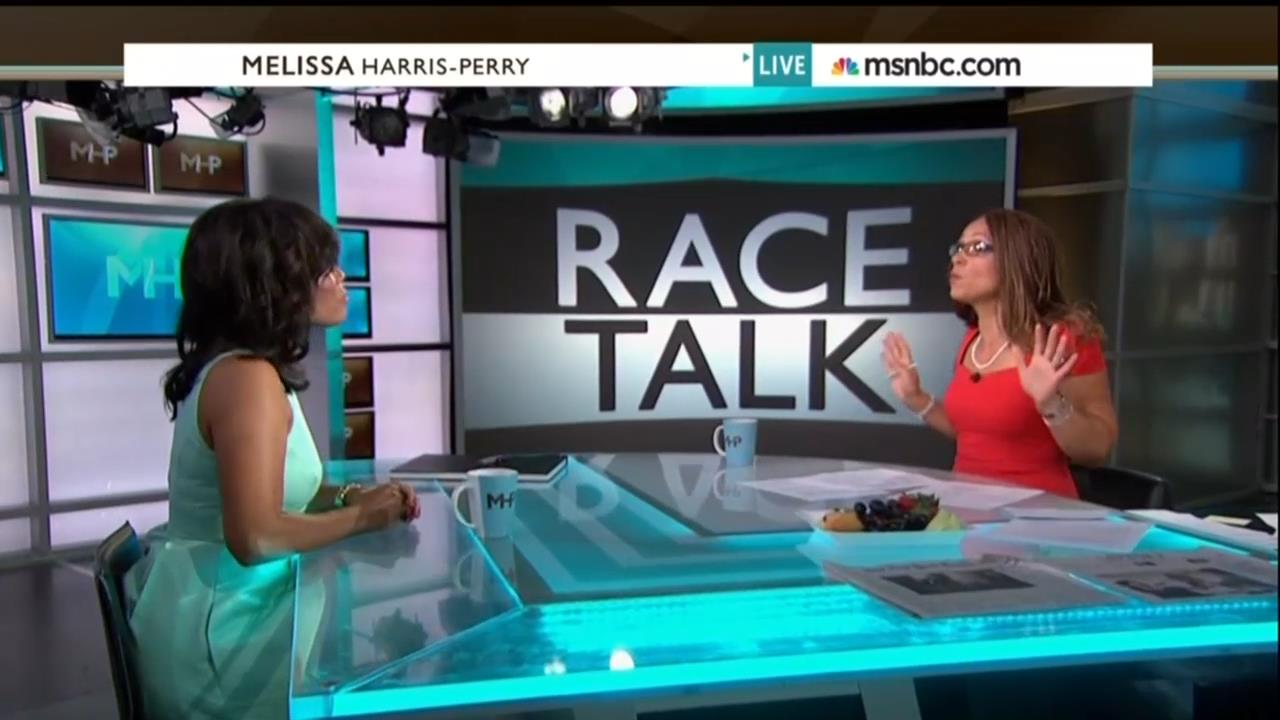 I think this response ignores decades of assertion that race is largely arbitrary as a social construction and very fuzzy and highly contested at boundaries. But then there are the responses rooted in a powerful desire to make specific claims that blackness is tied to histories and experiences unavailable to Dolezal or to other people born white. These experiences both positive and negative create a kind of black social cultural and familial world that is both distinct and some claim largely unknowable by someone like her.

The confusion about identity, the fear of appropriation, the assertion of biological blackness and the insistence on racial cultural distinctiveness, each has been woven into how we as a nation received and understood Dolezal`s story and they tell us as much about ourselves as they do about her.

I guess Melissa Harris-Perry thinks a cheap knock-off is actually the real thing. It’s sort of like MSNBC being willing to pretend that a pompous leftist professor lecturing at her audience for their backwardness is actually a talk-show host.

Dolezal’s parents said it best, ““Rachel has wanted to be somebody she’s not…She’s chosen not to just be herself but to represent herself as an African-American woman or a biracial person. And that’s simply not true.”

On Sunday, Harris-Perry returned to the sore subject when rage spilled out in her “Nerdland” Twitter feed about how wrong she was that someone could just "achieve" blackness:

HARRIS-PERRY: While Allison and I were exploring the question here on the show, those of you out in their land had already come up with your own answer. And responses on Twitter came fast and furious with a nearly unanimous opinion that not only was the question inherently problematic but that the answer was a resounding, ‘Oh, hell, no!’

Now, I want to pause here to say that I used the word trans and cis  not to make a direct comparison to transgender identity but it`s a way to try to find language to express the idea of a conflict racial race identity. But I also want to recognize that being trans is not an idea. It is a lived and historical experience of a group of people who are, right now, vulnerable to violence and to discrimination and inequity. But Nerdland, I heard you loud and clear.