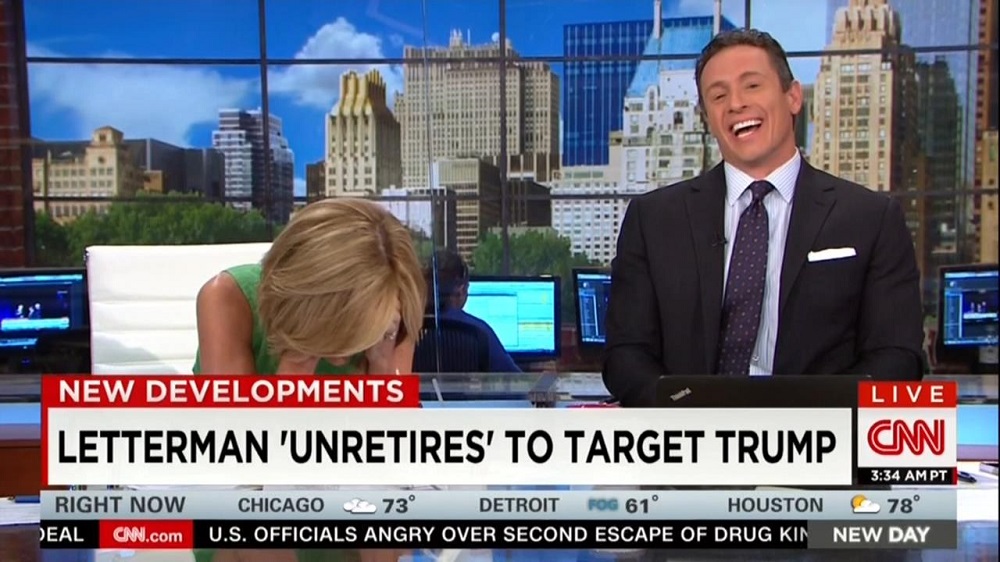 On Monday's New Day, CNN's Alisyn Camerota and Chris Cuomo hyped David Letterman coming "out of retirement" on Friday to issue a Top Ten list mocking Donald Trump. The two anchors were nearly brought to tears over Letterman's list. Camerota exclaimed, "We do miss David Letterman!" Cuomo seconded Camerota's sentiment and added, "We miss the social critique. It will be interesting to see who picks up the mantle." [video below]

ALISYN CAMEROTA: Now, Letterman also presented a top ten list of interesting facts about Trump. And the highlights include: Number one: 'During sex, Donald Trump calls out his own name.' (Camerota and Cuomo laugh) 'Donald Trump weighs 240 pounds – 250 with cologne.' (laughs)

CHRIS CUOMO: (laughs) Should have been hair spray.

CAMEROTA: You're right! Oh, you'll like this next one. Number whatever: 'Trump would like all Americans to know that that thing on his head is free range. (laughs)

CAMEROTA: We do miss David Letterman!

CUOMO: We do. We miss that. We miss the social critique. It will be interesting to see who picks up the – the mantle. John Oliver making a big push at it, but we'll have to see. But that's fun-

CAMEROTA: But I mean, the top ten list is what is always just-

It should be pointed out that John Oliver shares Letterman's liberal politics. Cuomo then wondered, "What will Trump say now in response? Because this man suffers no indignity lightly." Camerota replied, "A Tweet will be happening in three, two, one." Cuomo retorted, "It will be coming from him! And it will be like some of the most vicious stuff that we've seen."