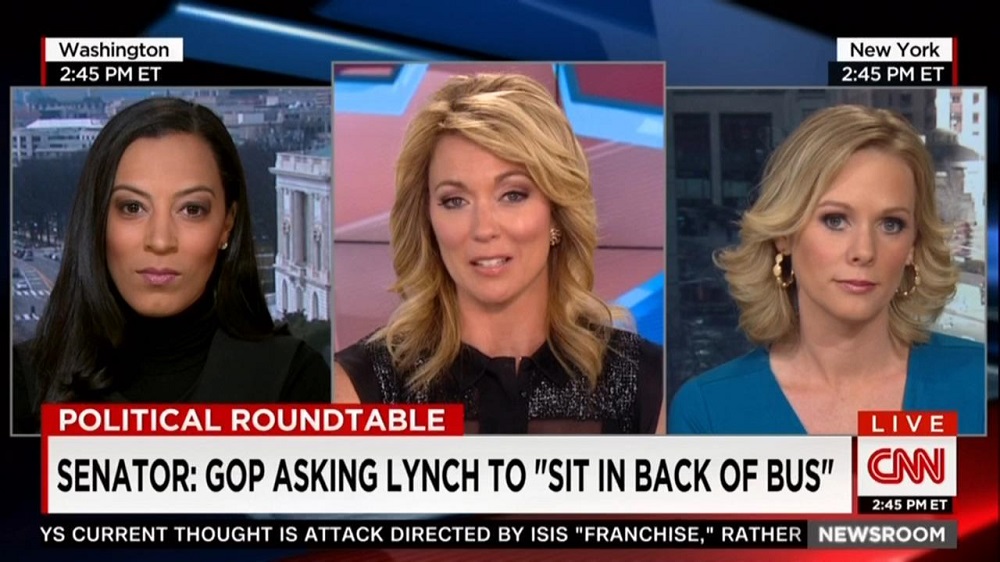 On Thursday's CNN Newsroom, Brooke Baldwin actually pointed out that both Democrats and Republicans are "pretty angry" with Senator Dick Durbin for his incendiary "back of the bus" attack on Senate Republicans, after they delayed the confirmation vote of Attorney General Nominee Loretta Lynch. Republican guest Margaret Hoover attacked Durbin for his "incredibly divisive" remarks, and underlined that "this has absolutely nothing to do with her race."

However, Democratic strategist Angela Rye ran to the Illinois politician's defense, and invoked the usual left-wing "war on women" rhetoric as parts of her talking points: [video below]

BROOKE BALDWIN: ...Even Democrats are – are pretty angry at Dick Durbin for using that language.

ANGELA RYE, FORMER EXEC. DIRECTOR, CONGRESSIONAL BLACK CAUCUS: Well – and I understand why they might be angry, but I think the reality of this is the Senate Republicans are so eager for a win here, Brooke, that they'd be willing to tie this very, very historic nomination to the expansion of the Hyde Amendment in an anti-human trafficking bill. It is ridiculous, and they need to be called to the carpet for it.

Again, why are they having trouble reaching minority voters? Why are they having trouble reaching women voters? Because they do things like this. This is idiotic; it's unfortunate; and you know what, Brooke? It so happens to be the day of the Planned Parenthood gala here in D.C. I mean, you can't find a worst time to fight against women in the Senate, and to fight against abortion provisions. It's crazy.

Moments earlier, Baldwin played the clip of Senator Durbin's Wednesday floor speech where he made the attack. The CNN anchor then turned to Hoover, and noted the "strong words there." The liberal Republican consultant blasted the Democrat, and explained what was actually going on with the issue:

MARGARET HOOVER, REPUBLICAN CONSULTANT: That is really – I mean, strong – I mean, incredibly divisive; incredibly pointed. You know, John McCain and Chuck Grassley both came out and said this is totally partisan – really unnecessary rhetoric coming from the Democratic side that is only intended to divide and to polarize. And that's right, because if you know what's actually happening in the Senate – and we're getting in the weeds here – but – but Loretta Lynch's vote is held up because of a trafficking bill that is being held up, because Democrats didn't realize, in committee, that it had abortion provisions that they couldn't agree with until they got to the floor. And now, they're trying to walk it back and figure out how to fix it.

So, there's some inside politics going on here, and – and one of the results is that this vote has been pushed back yet again. And the optics, while I grant aren't good, what's really going on is this has absolutely nothing to do with her race. She's going to pass. She's going to get confirmed. By the way, Republicans are going to vote for her.

It should be pointed out that former CNN pundit Roland Martin is among the liberals/Democrats criticizing Senator Durbin for his smear. Martin took the Illinois politician to task on his TVOne program on Wednesday.