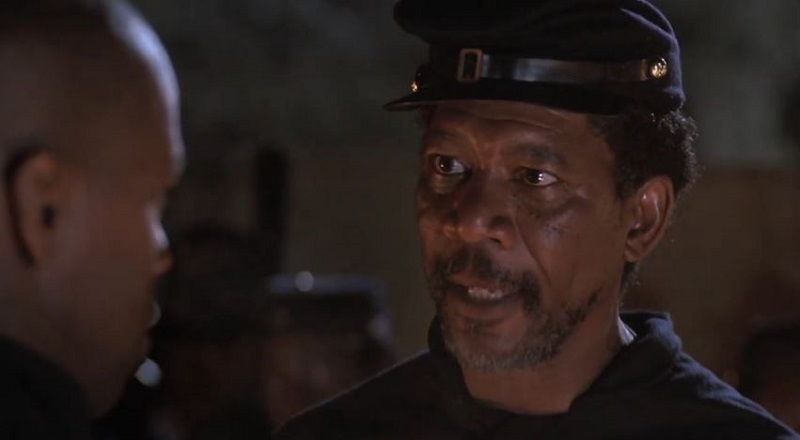 On Thursday, HLN – the network formerly known as CNN Headline News – premiered a new program: News and a Movie. A Tuesday press release from CNN detailed that "each News and a Movie presentation...features a dedicated celebrity media panel primed to explore issues sparked by the film, its place in pop culture, and the current creative and critical climate of Hollywood. The show will also take a look at the news stories that would have been trending at the time of film's release." (video of the program's teaser is below)

The first edition of News and a Movie zeroed in on the 1989 Civil War movie, Glory, starring Denzel Washington, Matthew Broderick, and Morgan Freeman. Liberal CNN legal analyst Sunny Hostin and actress Holly Robinson Peete acted as hosts. The "celebrity media panel" consisted of YouTube.com's GloZell Green (who was among the viral video producers who recently interviewed President Obama); stand-up comedian Chuck Nice; journalist Nick Chiles; and columnist Rich Eldredge. Actor Cary Elwes, who starred in the war flick, also appeared during the program. One of the panel segments featured a discussion where some of the panelists oddly lamented the lack of women in the movie, which detailed the training and service of one of the first African-American regiments in the Union Army.

Vareity's Brian Steinberg contended in a February 6, 2015 article that the new program is the "latest sign that owner Time Warner is seeking ways to bolster an outlet [HLN] whose identity has been in flux." Steinberg quoted from a top official at the network, who revealed some details about News and a Movie:

The network, once known for its news updates and coverage of lurid trials, has been in a makeover phase of sorts for the last year or so, and the launch of "News and a Movie"...is meant to emphasize some of HLN's new themes — namely, its efforts to curate trends taking place on social media as well as present programming that links viewers to Twitter, Facebook and the rest.

"There was a lot of brainstorming" over how to get movies on the network, said Keith Brown, HLN senior VP of programming, in an interview. "We have to be more than just getting a movie on for the sake of putting a movie on."

...Brown said the discussion around "Glory" would tie in to Black History Month, which is celebrated in February, and look not only at how actor Denzel Washington won an Oscar for his performance in the film, but at the fact that no actors from a minority background were included in the current set of Oscar actor nominations.

Brown expects panelists and hosts to dig deeper into the time in which the movies were released, perhaps contemplating what social-media outlets might have made of the films if such operations like Facebook and Twitter were around at the time....

The programming decision is an unorthodox one. Brown said he believes HLN has never aired movies in its past.

The new HLN program came in dead last among the cable news networks on Thursday during the 9 pm and 10 pm Eastern hours among the 25-54 demographic. However, it did beat the re-run of MSNBC's All In With Chris Hayes at 11 pm, so there may be a glimmer of hope for the feature.