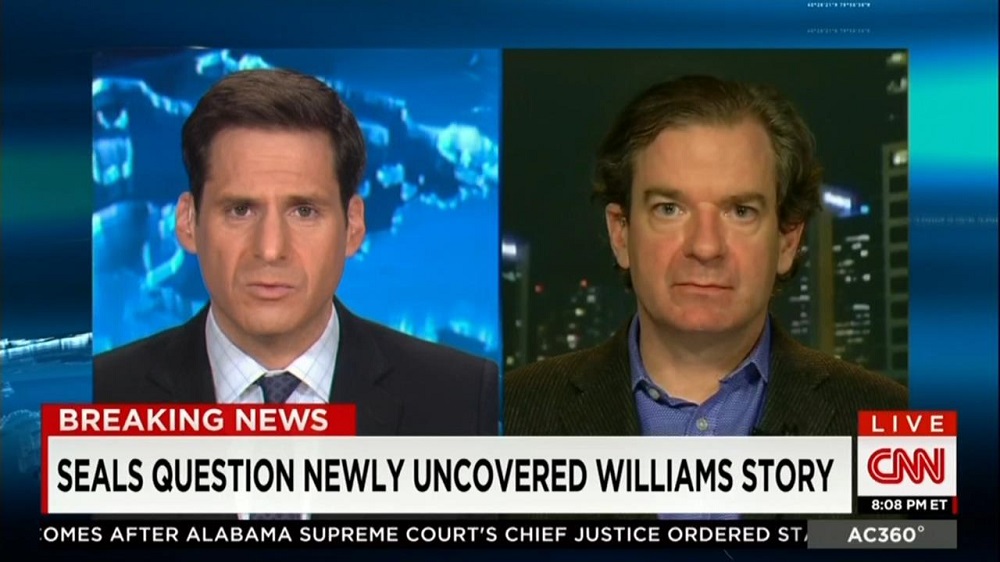 Thursday's Anderson Cooper 360 on CNN spotlighted another set of questionable accounts by Brian Williams regarding a supposed relationship with members of the celebrated Navy SEAL Team Six. On three separate appearances on CBS's Late Show between 2011 and 2013, Williams claimed that he traveled with the unit into Iraq just three days after the 2003 invasion; that SEAL "friends" of his sent him a piece of the wreckage from the helicopter that crashed on the 2011 raid that killed Osama bin Laden; and that a SEAL once sent him his knife.

Two guests – CNN analyst Peter Bergen and former SEAL Team Six member Howard Wasdin – cast cold water on Williams's claims. Fill-in anchor John Berman noted that an unidentified special-ops commander disclosed to Bergen, "We do not embed journalists with that unit or any other unit that conducts counter-terrorism missions. Bottom line – no." The anchor then asked, "Does that leave any wiggle room for Brian Williams's account of things?" The analyst gave a blunt answer: [video below]

PETER BERGEN: John, I really don't think so. I mean, his account of being embedded with SEAL Team Six didn't pass the smell test just on the face of it. I've spent some time reporting on that – on that group, and people that I've talked to within the SEAL team community – you know, can't recall journalists embedding with SEAL Team Six. And, of course, the special operations command has also said that this never happens. So, his account is very puzzling, John.

Before turning to Bergen and Wasdin, Berman first aired a report detailing Williams's statements from the three Late Show appearances:

JOHN BERMAN: Another questionable story has come to light, and just like the one that got him [Williams] suspended for six months, it involves a helicopter, a dangerous mission, and troops that he bonded with. And just like that story, this one is utterly compelling. It is packed with vivid detail and masterfully told. It is a gripping account of flying in Iraq during the war with SEAL Team Six, and later being sent a souvenir from their raid that killed Osama Bin Laden. It sounds too good to be true – which, of course, is the concern....

BERMAN (voice-over): May 2011 – a MH-60 Black Hawk helicopter is in engulfed in flames, after Navy SEAL Team Six successfully killed Osama bin Laden at his compound in Abbottabad, Pakistan. The special-ops team set fire to the stealth aircraft after it crashed in this courtyard – an attempt to destroy the helicopter's critical technology.

In an interview with David Letterman in January of 2013, Brian Williams had this to say about a piece of the burned-out wreckage.

BRIAN WILLIAMS (from 2013 episode of CBS's "Late Show"): About six weeks after the bin Laden raid, I got a white envelope, and in it was a thank you note – unsigned – and attached to it was a piece of the fuselage – the fuselage from the blown-up Black Hawk in that courtyard. And I don't know how many pieces survived. But I-

DAVID LETTERMAN: Wow! Sent to you by one of them?

WILLIAMS: Yeah – one of my friends.

BERMAN: Those friends, according to Williams: members of the highly-secretive SEAL Team Six. But that relationship is being questioned by members of the special operations community, and could be one of the things an internal NBC investigation is focused on.

In 2011, Williams described a long relationship with SEAL Team Six when talking about the bin Laden raid in another Letterman appearance.

WILLIAMS (from 2011 episode of CBS's "Late Show"): We have some idea which of our special operations teams carried this out, and it happens to be a team I flew in to Baghdad with – on the condition that I would never speak of what I saw on the aircraft – the aircraft we were on –  what they were carrying; and who they were after. But all of it was shared with me. It's common when covering a war, because to reveal that would be to endanger Americans.

BERMAN: Then in 2012, during yet another Letterman appearance that, perhaps, raises the most questions, Williams goes further.

WILLIAMS: I have a throat-cutter on my desk at 30 Rock which is helpful in staff meetings. It just sits there. It was sent to me by a member of SEAL Team-

LETTERMAN: You say a throat-cutter?

WILLIAMS: Yes – SEAL Team Six – I flew in to Baghdad – invasion plus three days – on a black-out mission at night with elements of SEAL Team Six, and I was told not to make any eye contact with them or initiate any conversation. It was like horses in the gate right before a mission. This guy had a wristband with his human target that he was after when we landed. Was it one of the members of the deck of cards – one of the leadership targets? They are amped. This is the best we have. And until he reached into my box of Wheat Thins – my last remaining American food – it could have been a Wheat Thin commercial, (audience and Letterman laugh) because this – this hand the size of a canned ham goes, and I lost half of my net supply of Wheat Thins. But then, I chatted him up and admired a knife as part of his utility belt-

WILLIAMS: Darned it, if that knife didn't show up at my office a couple of weeks later-

The CNN anchor added that CNN had "asked NBC for comment. They declined. We also do not know how Brian Williams himself explains all of this. We only have on-air words to go by – only his on-air words to fact check."

Berman then turned to Bergen, who gave his initial "didn't pass the smell test" answer on the Williams's claim about embedding with the Navy SEALs. The anchor also underlined that he had "talked to friends of mine in the journalism community, and we can't think of anybody who's embedded with SEALs before." However, he followed up by giving the suspended NBC journalist some benefit of the doubt: "Isn't it possible, Peter, though, that he'd share a transport with them, maybe – that it wasn't an embed, but he was just on the same helicopter with them? Is that even possible?" Bergen dismissed that hypothetical scenario: "In talking to somebody who's in the SEAL community, that seems pretty unlikely because...the way that he's presented this is that this happened right at the beginning of the war...these were serious operations that were going on. They weren't taking people for a joyride."

The CNN analyst continued by dismantling Williams's other claims:

BERMAN: ...There's also a question of whether Brian Williams was sent a piece of one of the military helicopters – the one that went down during the Osama bin Laden raid. Now, he was also sent, apparently, a knife – supposedly from a member of SEAL Team Six. This is what you were told by a SEAL officer about this. Let me read this: 'Doesn't pass any sniff test – even the knife story – not our M.O. If you were going to give it to someone, you'd just hand it to them. We don't have some covert mail carrier system waiting to shuttle war trophies around the world.' So that's problematic on the face, according to your source.

Also problematic: the timing here of that helicopter. The helicopter – you know, we all saw 'Zero Dark Thirty' – but the helicopter was blown up, right? After the Bin Laden raid on the ground there – so how would they get the pieces?

BERGEN: Well, that's right, John. I mean, you know, the SEALs were in bin Laden's compound for half an hour, and they wanted to get out very fast. So the last thing they did was they blew up the helicopter that had gone down. The idea that somebody would have rushed back – you know, to a helicopter that was – you know, basically on fire; grabbed a hunk of it; and, you know, wasted a lot of valuable time – and his teammates were worried. They were all worried that the Pakistani military might – you know, react. It just doesn't – none of it makes any sense. The idea of getting a trophy from this blown-up helicopter – it would have been – you know, piping hot because it would just been blown up. And no one would have taken the time to go and do that, when they were under a great deal of stress to get out of there.

BERMAN: And why would someone send it to Brian Williams, Peter, in the first place?

In the following segment, Wasdin, the former SEAL, cited his own personal experience as he dismissed the NBC anchor's tales. But just as he did with Bergen, Berman gave Williams some room for error:

BERMAN: ...You heard what Peter Bergen just said. Let me ask you then – this again – you know, giving Brian Williams the benefit of the doubt – maybe, he wasn't embedded with SEAL Team Six. Is there any way he was on a helicopter, you think, with SEAL Team Six on invasion-plus-three, as he said, headed into the airport in Baghdad?

HOWARD WASDIN, FORMER NAVY SEAL TEAM 6 MEMBER: I would say absolutely not. There are certain things in a helicopter ride you have to consider – one of which is egress procedures. If you come under fire – the helicopter crashes – you got to know exactly what to do, how to react. And the way he's describing having the armband on the deck of cards, so to speak, means that these guys were ready to hit the ground hot. And the last thing you're going to do, when you want to hit the ground hot, is babysitting – and that's no reflection on any embedded reporters. But I can tell you this: I've got 300 military, ex-military, thousands of combat vets' motorcycle association – who I've spoken to, and nobody has ever said, you know what? We really loved our embedded reporter so much that we gave him tokens of our esteem because he was just so great.

To have somebody along with you hinders you. You're going to have take care of them if something goes terribly wrong. And I will tell you this: I gave one knife away in 12 years in the military, and it was to a fellow Norwegian special-ops guy who I spent a month in a snow cave with. Not just because somebody said, hey that's a cool-looking knife; and then, it mysteriously shows up on their desk a couple weeks later. That story is so preposterous that I can't even elaborate further.

BERMAN: In the interest of full disclosure, look, I've embedded with marines, and I have been given things by those marines. I was given a picture, and I've been given coins by them. So you can get things from them. I'm not sure that's the most preposterous notion. But what about the idea that Williams would have been instructed in getting in to this chopper not to look anyone in the eye – not to initiate any kind of conversation?

WASDIN: See, and I've – and I've been in choppers where people weren't team guys – were part of our op – and it was definitely not in a war zone – and I've never one time heard them instructed not to look at us – not to talk to us....

But you're right – giving some small token to somebody, but it's for appreciation. So I'm not trying to crucify Mr. Williams here, but he would have to be more forthcoming on exactly what he did for SEAL Team Six to warrant such a great piece of equipment. And by the way: knives, guns are hard to come by in a war zone. I carried one knife into the war zone, and if I lost that knife or gave it away, it's a lot of logistics to get a new one.