CNN's Cuomo Unsure About Bin Laden 'Having to Lose [His] Life' 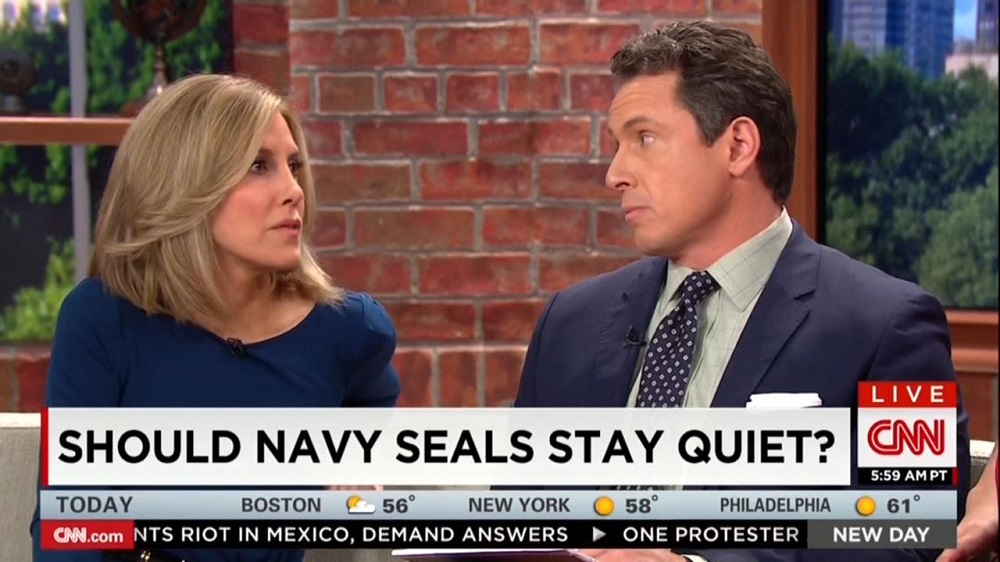 CNN's Chris Cuomo expressed his nagging doubt on Monday's New Day about the raid that killed Osama bin Laden. Cuomo, along with co-anchors Alisyn Camerota and Michaela Pereira, devoted a segment to the controversy over the Navy SEAL who claims to have shot bin Laden. Camerota boasted, "I find it satisfying to hear about his last seconds – I got to say." Cuomo initially agreed with his co-anchor, but then reversed course: "Actually, I don't know that I do. I don't like the idea of anybody having to lose their life, but that gets into a different conversation." [MP3 audio available here; video below]

Earlier in the segment, the CNN anchor voiced his concern over former SEAL Robert O'Neill's revelation about the bin Laden raid, and indicated that the American public might go too far in honoring them:

CUOMO: Probably not, and here's why. First of all, the information that you say is important is important, and we hear about it from the chain of command. Whether or not this is classified or not, that gets to his right to do it. But, we honor them; we celebrate them; we lionize them. We maybe even exaggerate their significance, because they're different – they're better.

CUOMO: His colleagues....They have a code about what they do and how they do it....It's what makes them better.

Just before Cuomo's "exaggerate their significance" statement, Camerota voiced her support for revealing more details about the celebrated military operation:

CAMEROTA: Well, I see it that there is a value in hearing about our brave heroes and hearing from them. It's part of our national fabric. We should all be so proud of them. We should talk about it.

We talk so much about ISIS. Wouldn't it be helpful to talk about what our brave Navy SEALs do? I know that they avoid the limelight, and I admire them and worship them for that. But just, in terms of our national conversation, I want to be able to tell my children about what our Navy SEALs do-

CAMEROTA: What he says, I think, does offer closure to some of the victims' families. I think it is good to hear that Osama bin Laden died afraid. But mostly, it's that I want to celebrate these people.

The former Fox News journalist repeated this after her co-anchor's remarks: "I respect that, but I don't think we lionize them enough. I don't think, for instance, my children know about the SEALs."

CUOMO: Just getting involved in something where they don't need to be – the propagandizing of what they do-

CAMEROTA: I do worship them for that.

PEREIRA: At the end of the day, he is gone, and that is going to give – let a lot of people sleep at night-

PEREIRA: A lot of people can sleep at night.

CAMEROTA: I find it satisfying to hear about his last seconds – I got to say.

CUOMO: I do, too, but I think that – you know, actually, I don't know that I do. I don't like the idea of anybody having to lose their life, but that gets into a different conversation.

CUOMO: We love the SEALs for the right reasons. We just want to see them handle their business the right way.