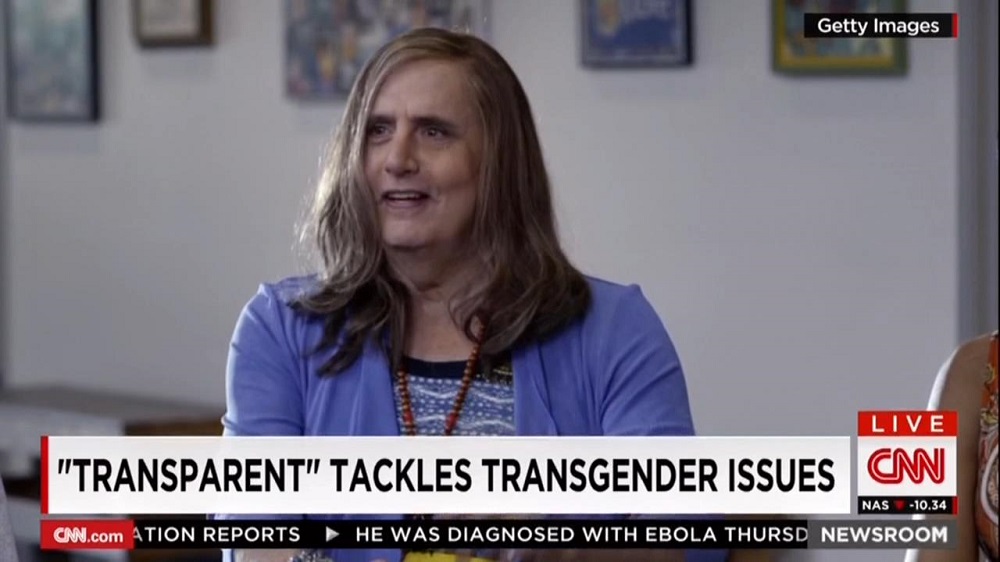 Samuel Burke touted Amazon's new streaming TV series Transparent on Monday's CNN Newsroom as "groundbreaking," and underlined that it's "tackling a topic that TV has rarely touched." The main character in the series, "Moira," is an elderly father who begins to dress as a woman. Burke acclaimed that "this role of a 70-year-old trans-gender character might just give Netflix a run for its money." [MP3 audio available here; video below]

Anchor Carol Costello led into the correspondent's report by outlining that "Netflix created huge buzz with original series, like House of Cards. Now, Amazon has a hit of its own....They're producing their own streaming series for Prime members, and the new latest release, Transparent, is getting huge critical acclaim." Burke wasted little time before using his "run for its money" phrase, and played up how "closely-kept secrets typically make for titillating television." He continued with a clip from the series, and with his "groundbreaking" label.

The CNN journalist turned to colleague Brian Stelter, host of Reliable Sources, who ballyhooed how media critics love the series: "I've never seen it before, where so many critics have lined up in front of a show – that otherwise, would never be heard of – and have all said, watch this show; it's the best new show of the fall." He then zeroed in on how the lead actor, as well as the creator of the series, have apparently been overwhelmed by the roles with the production:

JEFFREY TAMBOR: I said I was throw-up nervous. There's a scene where I have to come out to Sara, my daughter, and my – my hands were shaking. I said, well, that's good for Moira, but Jeffrey was shaking, because –  not because I wanted a good review; or not because I wanted – you know, to be believable in the scene; but I wanted to do it right.

BURKE: The creator and director of the series – whose own parent came out as trans-gender – says even she is surprised at just how much people say they relate to the main character.

JILL SOLOWAY, CREATOR AND DIRECTOR, "TRANSPARENT": I think my fear was that certain people probably wouldn't turn it on, because they would say, this show doesn't relate to me. But I think what's so amazing about what Jeffrey Tambor has done with his performance of Moira has been to create somebody that feels really familiar.

Burke also played a second clip from Stelter, who added his own hyped about the Amazon series:

BRIAN STELTER: To have the best new show of the fall airing not on a television network; not even on a cable channel; but on a service where you can also buy underwear – that is a revolutionary moment. That's a moment where you stop and think about the fact that television – great television – can come from anywhere now.

The MRC's Brent Bozell and Tim Graham pointed out in their Saturday column that CNN isn't the only media outlet boosting Transparent. Left-leaning website Slate sang the praises of the series: "To call it Amazon's first great series, or the only great series of the new fall season – both of which are true – is to damn it with faint praise." The New York Times also spotlighted its creator and underlined that her show "tries to fast-forward past the incremental water-testing that network TV has historically applied to shifts like this, to skip the eggshell-walking and the audience-coddling. She wants to give her viewers a fully realized trans character."