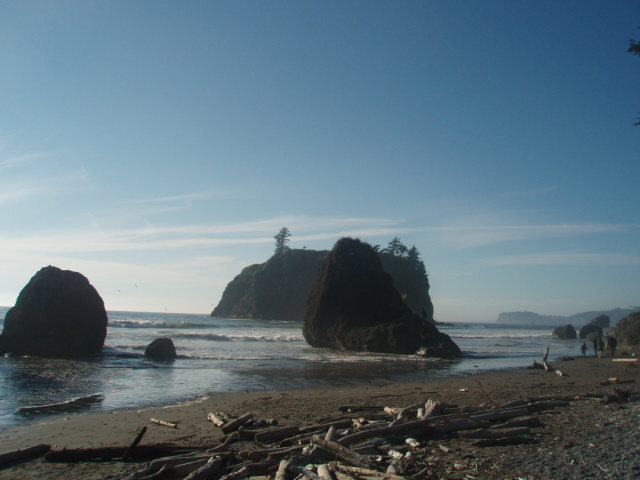 The Washington Post on Wednesday revealed a U.S. Forest Service plan that would "fine photographers who shoot on federal wild lands without a permit." Reporter Hunter Schwarz noted how "critics have characterized the rules as too vague and say it infringes on the First Amendment's free speech clause," and quoted from a U.S. senator who raised his concerns about the "troubling questions about inappropriate government limits on activity clearly protected by the First Amendment" (Olympic National Park's Ruby Beach pictured at right; taken by Matthew Balan in September 2011).

Schwarz cited a Tuesday report by The Oregonian that outlined the proposal more bluntly: "The U.S. Forest Service has tightened restrictions on media coverage in vast swaths of the country's wild lands, requiring reporters to pay for a permit and get permission before shooting a photo or video in federally designated wilderness areas." Correspondent Rob Davis got Democratic Senator Ron Wyden's response to the proposal from the Forest Service, which is an agency of the U.S. Department of Agriculture:

"The Forest Service needs to rethink any policy that subjects noncommercial photographs and recordings to a burdensome permitting process for something as simple as taking a picture with a cell phone," Wyden said. "Especially where reporters and bloggers are concerned, this policy raises troubling questions about inappropriate government limits on activity clearly protected by the First Amendment."

Earlier in his write-up, Davis quoted from Gregg Leslie of the Reporters Committee for Freedom of the Press, an organization which certainly has no reputation for being conservative: "It's pretty clearly unconstitutional...They would have to show an important need to justify these limits, and they just can't."

This isn't the first time that the Obama administration has issued questionable policies with regard to photography. Back in November 2013, then-CBS correspondent Sharyl Attkisson spotlighted how the White House Correspondents Association and "dozens of associations & media outlets" sent an official letter of protest to the White House press secretary at the time, Jay Carney. The letter decried how the administration restricted the access of photojournalists at certain presidential events, "while releasing government photos and videos of the same events."

Nearly a month later, NBC Nightly News devoted a full segment to the "escalating battle between the White House and the news media over access and image control." One wonders if any major media outlets will notice this new First Amendment controversy surrounding the Obama administration.