On the Horizon: the Prohibition of Freedom? 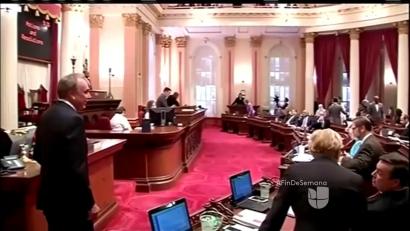 Upon taking office as Governor of California, Ronald Reagan declared that “Freedom is a fragile thing and is never more than one generation away from extinction. It is not ours by inheritance; it must be fought for and defended constantly by each generation.”

Today, defenders of freedom in America are facing a particularly insidious threat to their liberties in the form of the illiberal Left’s penchant for silencing and humiliation as a means of coercing citizens into adopting their worldview, even when it implies violating the First Amendment free speech and free exercise protections enshrined in the Constitution of the United States.

The latest front in this battle is taking place in California, where LGBTQ advocacy groups (not necessarily all LGBTQ community members) and their allies are attempting to ram through the state legislature a series of laws they ultimately seek to impose on the whole country, as well as the entire world.

At the national level, the liberal media have so far (not surprisingly) turned a blind eye to these measures, the most radical of which is definitely the last one, AB 2943, which has already been passed by the California State Assembly and is currently up for consideration by the state Senate.

In an interview with the MRC, attorney Matt Sharp from the Alliance Defending Freedom explained that “AB 2943 infringes upon the First Amendment right of counselors, religious organizations and so many others to speak freely on the ability of people to find hope and to explore all options as it relates to their sexual orientation and gender identity. This bill, if passed, would restrict that freedom of speech, telling people that certain viewpoints like the idea that people can change is now off limits and declared fraudulent in the state of California.”

Sharp added that “the idea that people can change and find true joy in embracing and living out their faith is at the heart of many religions. California should not be telling people that such faith is fraudulent”. As Cornell Law School’s Legal Information Institute points out, the First Amendment's Establishment Clause “prohibits the government from unduly preferring religion over non-religion, or non-religion over religion.”

Christians in California and elsewhere (along with those of other faiths and no faith) are also increasingly sounding the alarm. People like Equipped to Love founders Ken Williams and Elizabeth Wonning, along with Walt Heyer, a former transgender who poignantly says that “if California’s LGBT therapy ban had been law 30 years ago, I might have killed myself.” As Anne Paulk, executive director of the Restored Hope Network also told CBN News in a recent interview, “a lot of people look for help leaving homosexuality and addressing unwanted same sex attraction, and at this point California actually seeks to ban help for individuals who are seeking it.”

René Scull, from the free-market champion Atlas Network (and my father) also emphasized, in remarks to the MRC, that “it is absurd to try to interfere with the commercialization of goods related with ideological postures or postures against social attitudes because the First Amendment guarantees freedom of speech. Violating the rules of the market converts these measures that are trying to be implemented in something not only illegal, but also interferes with a healthy process of supply and demand.”

The mere fact that these measures have advanced as far as they have in a country which prides itself on being the world’s beacon for the defense of freedom of speech, religious freedom and free market economics is flabbergasting. The ramifications of the legislation go far beyond considerations about being heterosexual, homosexual, bisexual or transgender; or about being a Christian or an atheist: it is mainly about the prohibition of freedom.