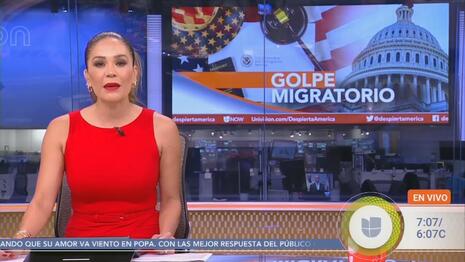 Watch as Univision bemoans the “migratory setback” (yet again):

KARLA MARTINEZ, HOST, DESPIERTA AMERICA: And at the nation's capital, the Senate's top adviser rejected a request by Democrats to include in the 2022 budget package, the legalization of millions of undocumented immigrants.

EDWIN PITTI: This decision by the Senate parliamentarian becomes a low blow not just for Democrats, but also for the loved ones of millions of undocumented immigrants who have, in recent years, asked for action (to be taken).

True to the network´s position as a de facto far-left immigration PAC with a broadcast license, the decision by Senate parliamentarian Elizabeth McDonald was described as a reversal in the battle to legalize some 8 million undocumented immigrants; that the allocation, which would add an estimated $139,000,000,000 to the nation's deficit, was snuck inside “infrastructure bill” as part of the Democrat's campaign promise wish list, however, didn't make it to the report.

Help the Media Research Center fight against the rampant bias in the news. You can start by writing to advertisers like Capital One to let them know how you feel about it.