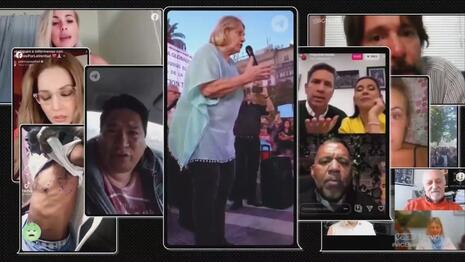 The Congressional Hispanic Caucus is nothing if not ambitious. First, they came for a Miami AM radio station whose content they didn’t like. Now, they are trying to haul Big Tech CEOs before Congress to whip them into fighting Spanish-language “disinformation” online and on social media.

"Addressing Spanish-language misinformation must remain an urgent priority. Many federal and state agencies, Members of Congress, and public health organizations rely on social media platforms to communicate life-saving health information and share federal resources during the COVID-19 pandemic. In addition, millions of Americans rely on social media as a source of information, including Latinos....As Hispanic Members of Congress, we have a duty to provide oversight of the role digital platforms play in how we communicate with our communities and how our communities receive important information.

Under cover of the COVID-19 pandemic, the censorious Congressional Hispanic Caucus is now demanding to know what Big Tech is doing to curb “Spanish-language misinformation." Inasmuch as these letters are a follow-up to previous communications, we are left to wonder whether recent moves such as Telemundo’s partnership with Google and Meta’s recent hiring of former Univision Senior White House correspondent Janet Rodríguez are at least a partial mollification of the Caucus ahead of any such hearings.

As we mentioned earlier, the Caucus has already attempted to intimidate a Miami AM radio station over employment practices and ultimately content. As we stated back then:

In brief, the Congressional Hispanic Caucus (a body largely composed of folks who couldn’t get elected dogcatcher in Miami-Dade County including, to wit, a literal Castro Brother) is using a labor dispute as cover to attempt to remove ideological opponents from the airwaves.

This effort to suppress Hispanic conservatives is by no means a new initiative, but began in earnest during the 2020 election and has been ongoing since. As the Trump campaign’s anti-communist message took hold, the left began to cry “disinformation”. Latinxtroturf organizations and defeated Democrats (like former congresswoman Debbie Mucarsel-Powell, who asked her former CHC colleagues to intervene in Radio Caracol’s licensing) joined forces to try to pressure Miami stations into silencing conservative voices.

These same players have now come together in order to silence dissident speech online and on social media. The game is the same, no matter the medium. To be crystal clear, this entire disinformation play is about containing Hispanics within a limited number of approved corporate information channels as Democrats' fortunes continue to wane among this critical cohort. I, for one, do not trust these people with the power to decide what is or isn't disinformation. Whether it is natural immunity, therapeutics, or the Hunter Biden story, Big Tech and corporate media have shown that they cannot be trusted.

Moreover, Hispanics are not a ward class that needs to be protected from itself- and the community is beginning to acknowledge its own independence.

As conservative Spanish-language content creators and media outlets continue to emerge and bring more independent thought into the community, it may well be the case that it's already too late for the Censorious Hispanic Caucus and Big Tech.