The nation’s leading Spanish-language networks continue to suppress the explosive revelations from Hunter Biden’s laptop, as broken by the New York Post and reported by other outlets, preferring instead to hide this story from their viewers. Our latest study reveals the extent to which the story is suppressed while other reports with far less corroboration receive many times more coverage, with a predictably partisan split.

We went back and compared coverage of two stories on Univision and Telemundo: the New York Post’s bombshell on Hunter Biden’s laptop versus The New York Times’ incendiary story alleging that President Donald Trump paid $750 in personal federal income taxes (referred to heretofore as Trump’s Taxes Part II). We found that the networks covered Trump’s Taxes II a whopping 24 times as much as they covered the NYP Hunter Biden bombshell over a period of two weeks after each story respectively broke: 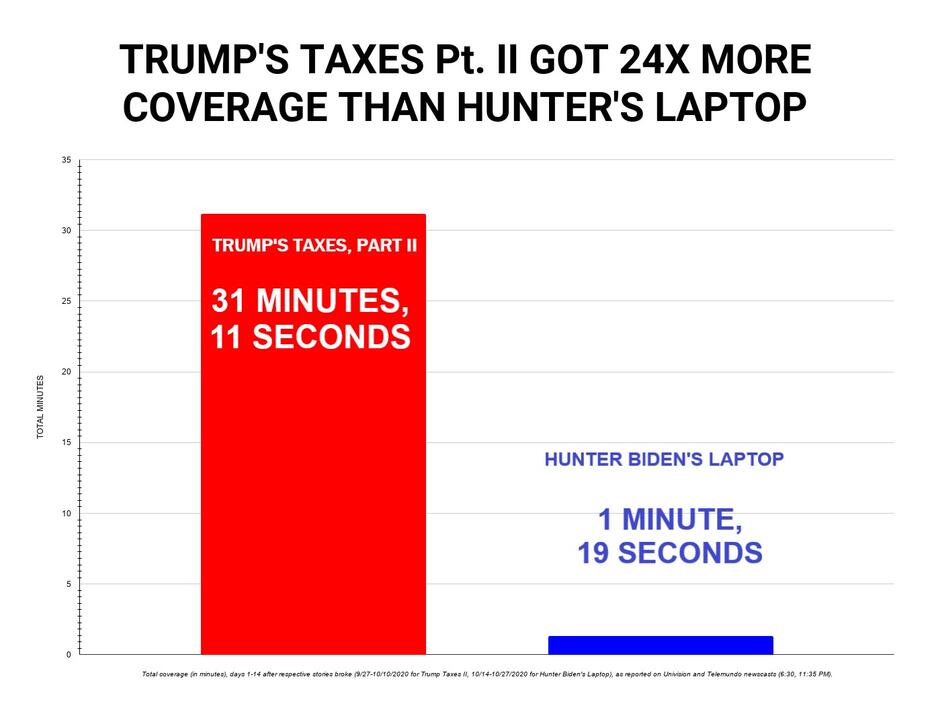 As we’ve previously reported, the reports on the Hunter Biden allegations were framed within the context of the final presidential debate, and what President Trump might say about Hunter. For example, Telemundo’s Cristina Londoño reported that:

Joe Biden is staying home. He has been preparing for the president’s attacks. He knows that (Trump) will accuse him of being corrupt, and will mention his son Hunter’s dealings in Ukraine, as well as in China.

Univision took the same tack, reporting on what Trump said about Hunter at a rally in Tucson, Arizona. From correspondent Galo Arellano’s report on the rally:

GALO ARELLANO: He used most of his speech in Tucson, to attack his opponent, Joe Biden.

DONALD TRUMP: We think the laptop was made by Russia

ARELLANO: He mocked the Democrats' attempts to argue that the computer, which contains emails that hurt their campaign, was obtained with help from Russia. In these emails, it would supposedly be confirmed that Biden was associated with his son Hunter's alleged shady business with a natural gas company in Ukraine. The former vice president has denied these allegations and is now focused on preparing for the third and final presidential debate, which will take place Thursday in Tennessee.

By the way, Joe Biden's running mate, Senator Kamala Harris, was in Jacksonville, Florida today, where she said that social justice is on the ballot. Patricia.

Nowhere in these reports is there any mention of the actual report from the New York Post, of the details of the emails found within, or of the censorship endured by the Post for its reporting. These throwaway mentions of what would normally be an election-altering bombshell (except that Orange Man Bad) totaled one minute and 19 seconds.

On the other hand, Trump Taxes II, a story with much less rigorous sourcing and verification than the Biden laptop, got top billing on Univision and Telemundo to the tune of 31 minutes and 11 seconds over the same two-week period after the story initially broke. Again, because Orange Man Bad.

The extent to which the nation’s Spanish-language media is broken has been broadly reported here at MRC Latino. The grotesque disparity between coverage of these respective stories further highlights that brokenness, and explains the Hispanic community’s increasing distrust in the media outlets they depend on for news.

Click here to read Media Research Founder and President L. Brent Bozell III’s letter to the FCC in strong opposition to the proposed rule change that would allow Univision to fall under 100% foreign ownership.