In its coverage of DACA arguments before the United States Supreme Court Univision, the nation’s leading Spanish-language network, willfully concealed a portion of President Trump’s tweet that expressed willingness to make a deal: "If Supreme Court remedies with overturn, a deal will be made with Dems for them to stay!"

Watch Univision’s gross act of bias by commission below, as the network cuts half of Trump’s tweet from its Spanish-language newscast but covered the entire statement on English-language UNews:

ILIA CALDERON: President Trump defended his decision, Jorge, to eliminate DACA program- on his favorite platform, which is Twitter, and he did it in his usual aggressive style.

JORGE RAMOS: However, Ilia, the president wrote very negative comments regarding DACA recipients, stating that some of them were no “angels”, and even going on to call some of them “criminals”. But the DREAMers answered quickly, as Claudia Uceda reports.

CLAUDIA UCEDA: Hundreds of DREAMers made themselves heard outside of the Supreme Court. They want their dreams to be a reality.

SAMANTHA MURILLO, DACA RECIPIENT: I want to be a doctor, I’m a sister, I’m a friend and I’m… a good student.

UCEDA: Some stood in line and braved the cold. And others woke up to read the president’s tweet, who began his day by insulting them.

“Many of them aren’t so young any more, and they’re far from being “angels”. Some are tough, hardened criminals” wrote Trump, angering this pastor (who is a DACA recipient).

MILUSKA AQUIJE, DACA RECIPIENT: I’ve never committed any crimes here, on the contrary, I’ve helped young people from the communities, so if that’s criminal then I’m going to keep being a criminal.

CAROLINA SARASSA: Now, President Trump tweeted today that many of the immigrants dubbed DREAMers are, quote, “hardened criminals”, but said that if the Supreme Court backs his decision to end the DACA program, he will cut a deal with Democrats. Trump has made hard-line immigration policies, including pursuing construction of a wall along the U.S.-Mexican border, a centerpiece of his presidency as well as his re-election campaign for 2020.

UNews, which aired earlier in the day, devoted a whole 27 seconds to its accurate reporting of Trump’s tweet, but made sure to close with mentions of “hard-line policies” and the wall, so as not to end the report with Trump’s willingness to make a deal.

But at least Fusion’s tens of viewers got a full report (albeit biased), which is more than can be said for Univision’s Spanish-speaking audience. Univision viewers were treated to a full minute and 15 seconds of anchor framing to the tweet, before tossing to congressional correspondent Claudia Uceda, who got a soundbite from one DACA recipient, sawed off the portion of Trump’s tweet that addressed a potential deal with Democrats on DACA, and then got a soundbite from another DACA recipient.

Additionally, Univision omitted the portion of the tweet referencing presidential authority to sign DACA in the first place.

Many of the people in DACA, no longer very young, are far from “angels.” Some are very tough, hardened criminals. President Obama said he had no legal right to sign order, but would anyway. If Supreme Court remedies with overturn, a deal will be made with Dems for them to stay!

Now look at a still from Univision's coverage- cutting off the reference to presidential authority, and more importantly, the "willingness to make a deal with Democrats" part of the tweet so as to cast Trump in the worst possible light: 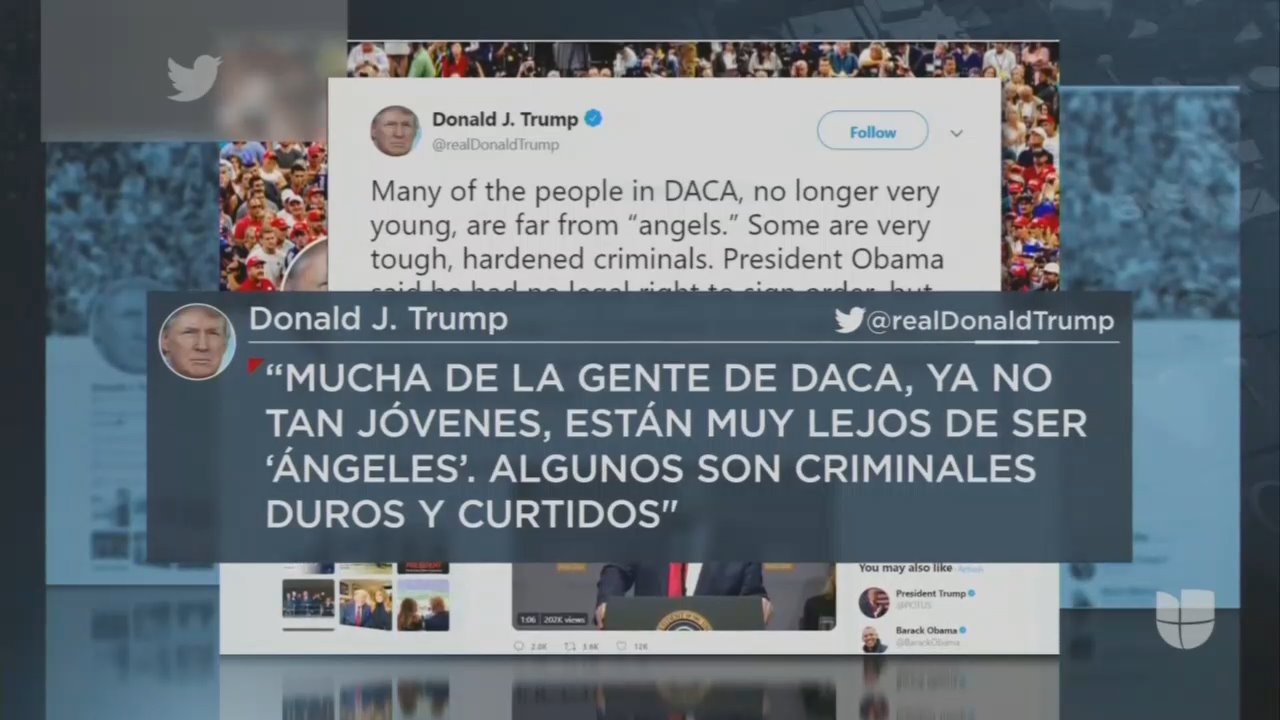 The whole purpose of the segment, of course, is to garner sympathetic support for the DACA beneficiaries, using two lines from Trump's statement on order to fuel grievance. The truth, in this instance, fell casualty to Univision’s goal. But why make such an obvious material misrepresentation of facts in furtherance of those goals?

There is no logical explanation for these actions other than Univision is a PAC with a broadcast license.