It happened again...this time, on a warm summer morning at a baseball field in Alexandria, Virginia. A deranged Bernie Sanders supporter took it upon himself to open fire upon Republican members of Congress, leaving several severely wounded in his wake. And Univision anchor Jorge Ramos wasted no time in reeling off yet another screed in support of gun control.

I suppose I should be grateful to Ramos, because at least he chose to embed this anti-gun rant within last week's opinion column. As to the column itself, I will note that there is no call to reflection on the increased coarsening of our political discourse, nor is there any examination of the violent rhetoric that may well have helped drive the shooter over the edge. Instead, Ramos' readers are regaled with a rehash of all the points that he has driven into the ground since Donald Trump rode down that escalator two years ago. Ramos' presentation these days is pretty much limited to pet issues and boogeymen, and last week's column is emblematic of that...Trump and guns.

What is notable about the column, though, is that Unvision has reverted to that old time-worn habit of deleting Ramos' most incendiary statements when translating them into English and for Fusion. Recall the time, for example, when Fusion scrubbed an entire line about the supposed gullibility of Catholics. This time, it was a smear of lawful gun owners that magically made its way to the cutting room floor.

Here's a screengrab of Ramos' original column which, as always, is first published in Spanish.

Now here is my translation of the original column, side by side with Univision's own published translation. What's missing there? Hint: It's in the bolded text from the image above. 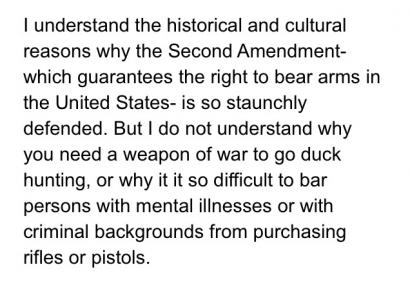 Jorge Ramos' professed understanding of the historical and cultural reasoning behind the Second Amendment is little more than a false foundation upon with which to lay his smarmy line about "weapons of war" and duck hunting. To be clear, Ramos understands nothing about the Second Amendment beyond his limbic desire to see it repealed.

An honest dialogue about the Second amendment on the Nation's leading Spanish-language network would include the fact that persons with behavioral health issues and criminal backgrounds are already barred from owning firearms, and that some (such as the racist Charleston shooter) are going to fall through the cracks.

Furthermore, the "need to own" defensive rifles is key to the Second Amendment's core function as guarantor of the rest of the Bill of Rights; a last stand against tyranny. If Ramos truly sought to understand the Second Amendment, he'd explore the situation in Venezuela and note that tyrant Nicolás Maduro's first initiative upon taking power from a deceased Hugo Chávez was to disarm the populace and arm the pro-regime colectivo goon squads. If there remained any additional doubts, then perhaps Ramos could look to Mexico, where one state (Nuevo Leon) is looking at enacting the Castle Doctrine.

Jorge Ramos doesn't understand the Second Amendment, nor does he care about the motivations of lawful gun owners. It only takes Ramos a sentence within a throwaway column to prove, yet again, that he is only interested in making you afraid of both, and that he is unafraid of leveraging tragedy to so, whether in Arlington, Sandy Hook, or Orlando.