On the latest edition of Univision's weekly public affairs show, Al Punto, viewers were treated to a fascinating exchange on immigration between anchor Jorge Ramos and a member of the Trump Hispanic Advisory committee. But there was much more to that exchange beyond the actual skirmish.

The Trump advisor in question is former Puerto Rico Attorney General  José Fuentes-Agostini, and this was the exchange:

JOSE FUENTES-AGOSTINI, TRUMP CAMPAIGN HISPANIC ADVISORY COMMITTEE: … If what you understood from that comment is that the 35 million Mexicans that are in this country are all criminals, then you made a mistake. You understood it erroneously…

JORGE RAMOS, ANCHOR, UNIVISION: No, it’s not what I understood, it’s what he said…

JOSE FUENTES-AGOSTINI, TRUMP CAMPAIGN HISPANIC ADVISORY COMMITTEE: Mr. Trump is not… no… no…

JOSE FUENTES-AGOSTINI, TRUMP CAMPAIGN HISPANIC ADVISORY COMMITTEE: He clarified his statement, very clearly, and he said that there are 150,000, give or take, criminals in this country that have to be taken out of the country. That’s what he was referring to.

JOSE FUENTES-AGOSTINI, TRUMP CAMPAIGN HISPANIC ADVISORY COMMITTEE: He said that if he had… no, he said clearly that if he had offended anybody, that he’d walk back the comment. 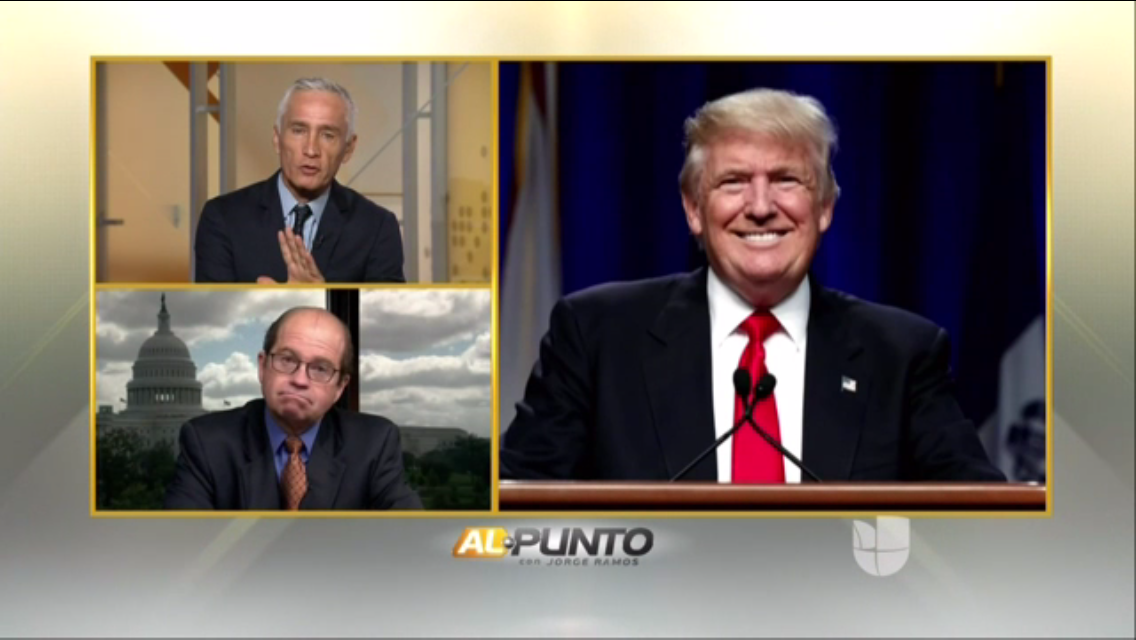 This is pretty much how the the entire interview went, in stark contrast with Ramos' immediately following interview with Clinton Latino Outreach Director Lorella Praeli. Ramos half-heartedly lobbed an obligatory e-mail question at Praeli but appeared uncomfortable with even this pro-forma gesture of balance; this potential discomfiting of a Clinton surrogate - as if the question were extracted from him as part of a ransom. What followed was the usual Clinton surrogate softball session and Praeli fired off all of her points unabated.

Let's go back to Fuentes, though. Regular readers of this byline know that we've charted a playbook - a template on how potentially hostile interviewees (which, let's face it - as far as Al Punto and Jorge Ramos are concerned, that is synonymous with Republicans) should engage Ramos.

Fuentes is the first Republican to come out with across-the-board strong, substantive pushback since Texas Senator Ted Cruz did so last year. His direct engagement of Ramos kept the anchor on his heels and denied him the ability to get comfortable with basic set-piece questions (unlike Kentucky State Senator Ralph Alvarado, who was all but annihilated by Ramos after justifying his support for Trump with Reagan's 80% rule).

After months of complaining that he had no Trump representatives to speak to, now Ramos has a plate-full. For Ramos and Al Punto, the segment marks a departure from the usual set of Ramos-friendly Republicans that often appear on the show - and we are hopeful that this trend will continue after the election.