Univision News Reminds You That It Has An Agenda Beyond Immigration 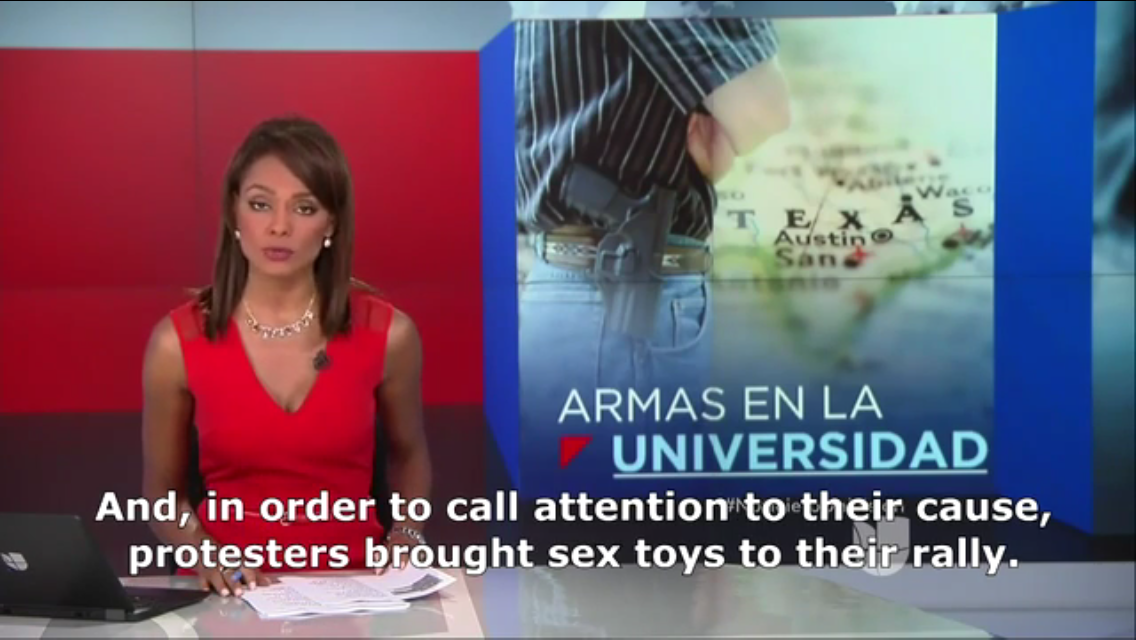 From time to time, we are reminded that Univision's political agenda extends beyond immigration into advocacies for other left-liberal policy preferences. Univision's news coverage of the anti-campus carry protest at the University of Texas (Austin) is an example both of such coverage, and of bias by framing.

Immigration is Policy Item Número Uno at Univision- the mother's milk that assures the continued survival of the network (at least until that digital unicorn sprouts wings and flies). But there are other policy items that receive biased coverage from the network's news division- and gun control is at or near the top of the list.

Here is how anchor Ilia Calderón introduced the story on Noticiero Univision:

ILIA CALDERÓN, ANCHOR, UNIVISION: In news from the United States, college students in Texas returned to class today amidst protests against the implementation of a new law that allows (students) to carry firearms on campus. And, in order to call attention to their cause, protesters brought sex toys to their rally. Many professors also reject the law because they consider it a risk to the security of the collegiate community, even more so after the tragic mass shootings at universities over the past years.

It is worth noting that the story itself was pretty straight-up. Texas correspondent Pedro Rojas obtained reaction from both sides of the Texas campus carry issue, for and against, and did not inject editorial opinion into the segment.

The bias in this story comes from Calderón's framing upfront, through the conflation of campus carry with mass shootings at college campuses.

This should come as a surprise to no one, because Univision recently joined in efforts to disseminate anti-gun propaganda by partnering with Bloomberg-funded Moms Demand's "Wear Orange" campaign. As we said back then:

The network is keen on pushing as many eligible individuals as possible to become U.S. citizens for the sole purpose of voting in this year's presidential election, but is wholly uninterested in promoting assimilation via civic education beyond that which promotes its left-corporate agenda, which in 2016 appears to be expressly limited to voting for Hillary Clinton. I won't be convinced otherwise until the network puts as much effort into educating individuals on the OTHER amendments to the U.S. Constitution as it does into teaching illegal immigrants how to invoke the 4th and 5th Amendments in order to evade deportation.

For contrast, consider Telemundo's coverage of the same story, which ran all of 21 seconds in its entirety. Here's a transcript of Telemundo anchor José Díaz-Balart's report for comparison:

JOSÉ DÍAZ-BALART, TELEMUNDO ANCHOR: Dozens of students that began classes at the University of Texas at Austin today brought sex toys attached to their backpacks. They did so in protest of a new law that allows the concealed carry of firearms within the campus. Others protested with signs- they say that it is inconceivable that their (sex) toys are forbidden on campus but pistols- guns are not.

Look at that again. 21 seconds for the whole story on Telemundo, versus a 31-second intro to a minute-plus story on Univision. If you want to nitpck, the blurb did not include a pro-gun take, but there was no anti-Second Amendment preaching, either.