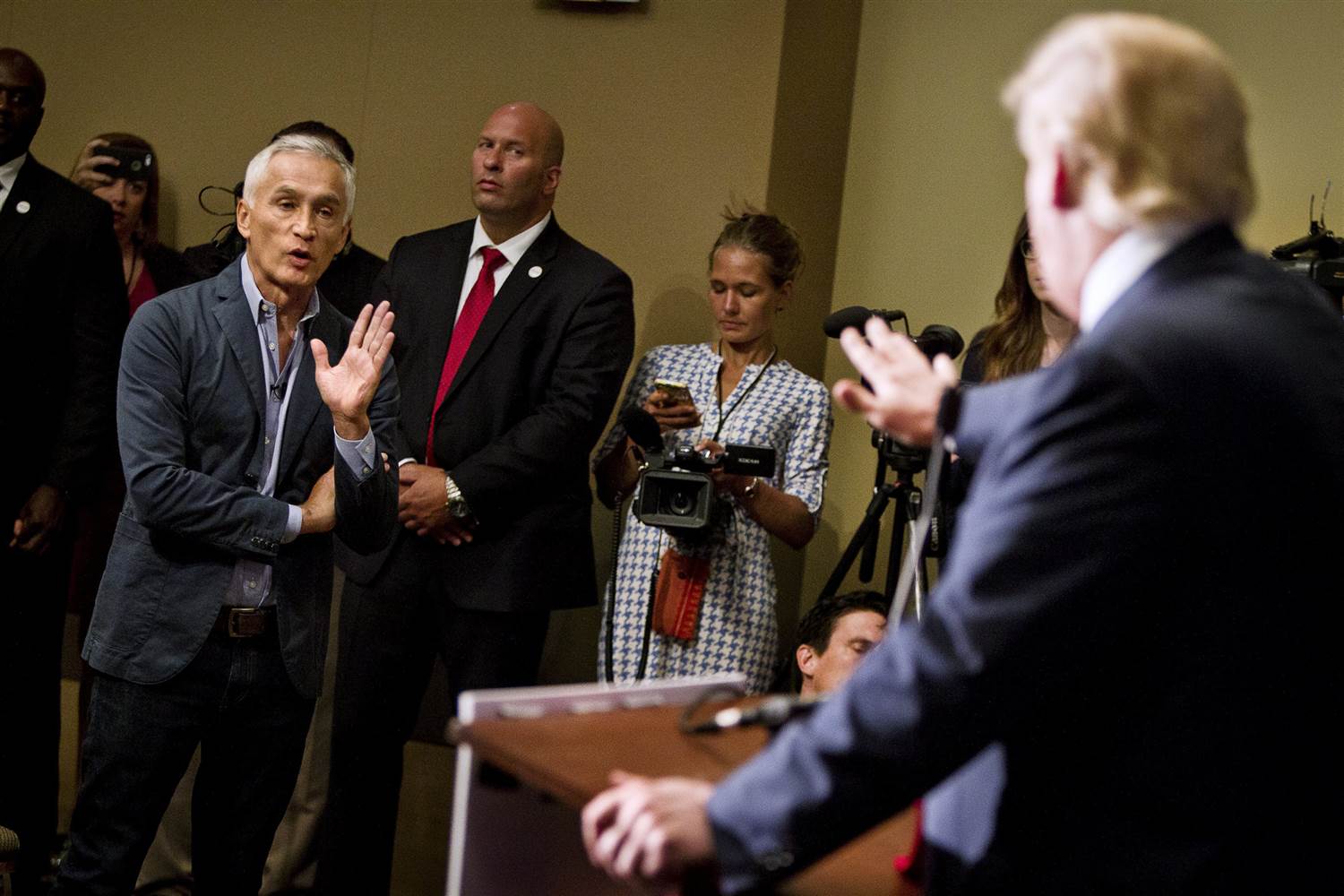 This post was originally going to be written as a "what to expect" sort of pre-analysis to how our domestic Spanish-language news media might react to news of a potential Donald Trump shift on immigration. Of course, that pretty much went out the window once Jorge Ramos logged on to Twitter yesterday.

Political Twitter was abuzz on Saturday with news of a potential Trump shift on immigration, which broke shortly after the Republican candidate met with a Hispanic advisory panel at his namesake Midtown tower. Per BuzzFeed's Adrian Carrasquillo:

In a Saturday meeting with his newly announced Hispanic advisory council, Donald Trump suggested he is interested in figuring out a “humane and efficient” manner to deal with immigrants in the country illegally, according to three sources. Trump, however, stressed that any new announcements will still be in line with the border security-focused approach that has invited intense opposition from Latinos and immigrants since he launched his campaign.

Univision's Eduardo Suárez dropped this nugget into his report, which is what set tongues wagging Saturday night:

"I really liked that Trump acknowledged that there is a big problem with the 11 million [undocumented] people who are here, and that deporting them is neither possible nor humane,” said Jacob Monty, a Texas immigration lawyer who attended the meeting.

If true, Trump's plan would stand in sharp contrast to his previous statements about immigrants during the campaign. During the primaries, the New York property tycoon promised to build a wall along the border with Mexico and to deport all undocumented immigrants.

If true, this would not just be any reversal from Trump, but a major reversal on his signature issue- the issue that rocketed him to the nomination, and one that will inevitably garner exacting coverage on our domestic Spanish-language media. The aforementioned pre-analysis was going to hone in on how there were basically three ways to cover the story.

The first (and unlikeliest scenario) was to just cover it straight-up as "Trump reverses on immigration". The second scenario was to cover it skeptically, "Is Trump for real this time?", perhaps a comparison of his past statements knocking Mitt Romney for his self-deportation comments and telling Dream kids that "you've convinced me" with his proposed wall and inflammatory statements made when he first announced his candidacy.

Jorge Ramos, however, wasted little time going for what was behind Door Number Three, "Too Little, Too Late". 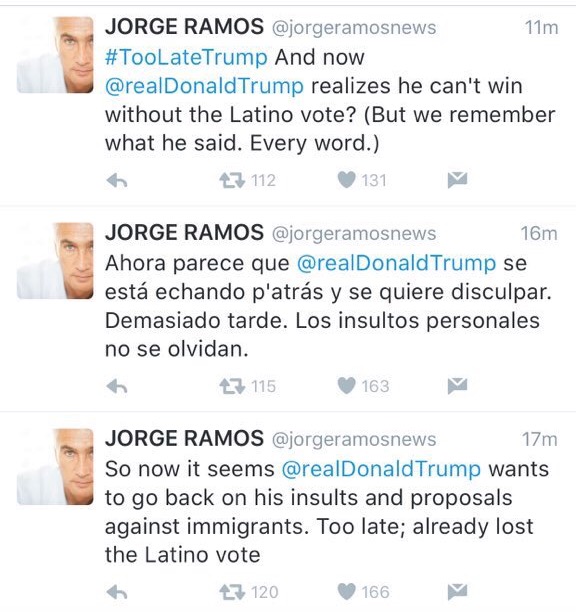 It goes without saying that Ramos' rhetoric is not that different from what Hillary Clinton's campaign has offered in terms of reaction to this development. Here again, Ramos arrogates for himself the standing to speak for an entire community, and to pre-screen a campaign proposal that won't even air until Thursday.

In the pre-analysis that I never got to write thanks to Ramos coming out of his skull, I was going to question whether Univision was still institutionally able to fairly cover the campaign, given the published opinions of its anchors, the network's commitment "no two sides" of policy issues favorable to Democrats, the network's silence regarding coverage of scandals surrounding the Clinton Foundation, and its executive chairman's commitment to Hillary Clinton's pursuit of the presidency of the United States.

In terms of credibility, perhaps Univision (at least the TV side of the operation) is left with no other choice than to editorially commit to #TooLateTrump. Ironically, it was Ramos himself who affirmed that the network's long-term success depends on a continuously open border so it is no suprise that he would also tip his hand here.