Readers of this byline know that I have been a relentless critic of Univision’s news division. These criticisms have covered the network’s biased coverage of the news of the day, its institutional practice of advocacy journalism in furtherance of progressive policies (amnesty being the most prominent of many), and its general boosterism of Hillary Clinton’s presidential candidacy. But in all fairness, this boosterism is not limited to Democratic candidates. The network is signaling a clear preference on the Republican side of the ticket as well.

The overwhelming majority of Spanish-speaking Republicans that appear on the network’s weekly Al Punto program as analysts or commentators are supporters and surrogates of former Governor Jeb Bush (R-FL). These relationships are not always disclosed, which is troubling when a Republican “analyst” is pulling double duty as a Bush campaign surrogate. Univision is not as diligent in booking surrogates of other candidates, other than that one time time they booked a Hispanic Trump supporter in the role of punching bag for the rest of that week’s analyst panel. 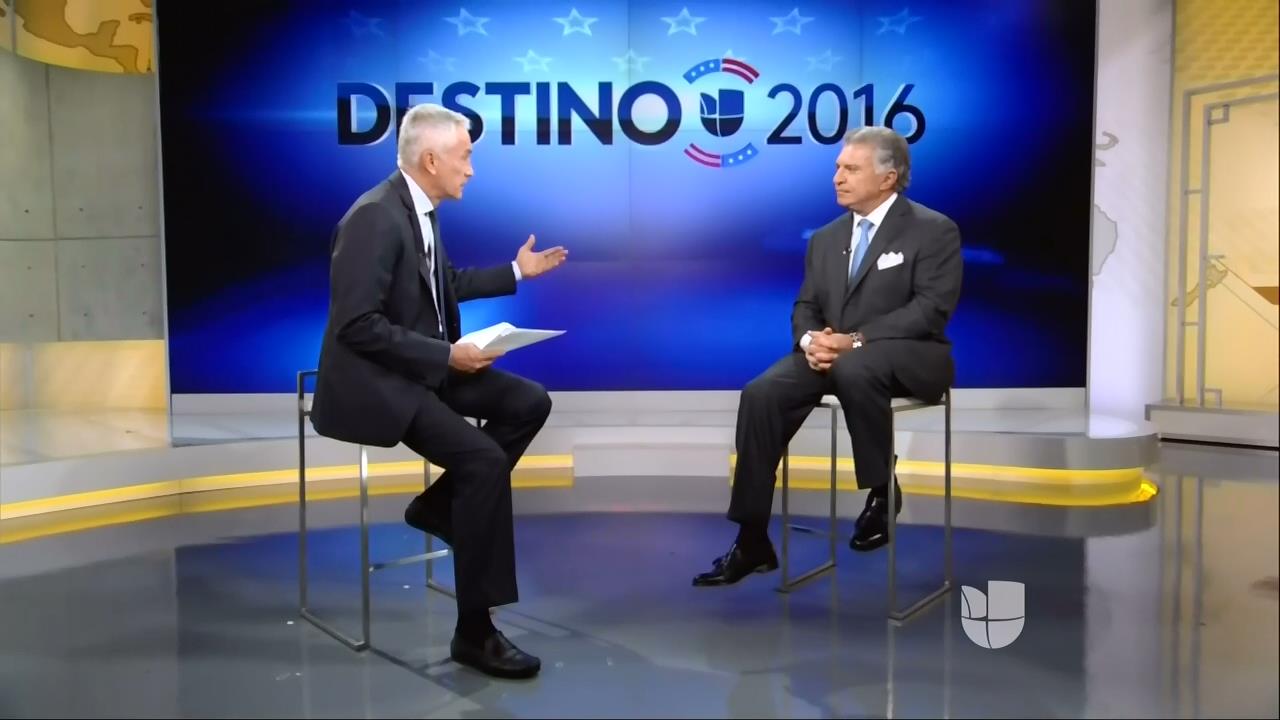 The most recent instance of this troubling trend occurred on this week’s Al Punto, in which former Republican Party of Florida Chairman Al Cárdenas came on as the “Republican analyst” in order to discuss the state of the primaries and the week’s events. While floridly introducing Cárdenas, Jorge Ramos never disclosed that Cárdenas sits on Jeb Bush’s National Hispanic Leadership Team, nor that he is a bundler for the campaign.

Cárdenas’ purpose on Al Punto was evidently twofold: to dispense “conventional wisdom” in furtherance of the Bush campaign, and to dump on the opposition under the broader “analyst” banner. It should be noted that while doing so, he groused about the necessity of having Hillary Clinton testify for eleven hours before the House subcommittee on Benghazi - in response to a question from Ramos regarding the optics of the hearings, a luxury unavailable to the martyred Benghazi Four.

However, these quotes from Cárdenas were the most startling of the interview by far:

AL CARDENAS: ...there will be an effort among persons that are neither affiliated with one candidate nor the other, but are (affiliated) with the party, and love their country, and will begin an independent process of their own accord, focusing on Donald Trump, and why this country can’t live with Donald Trump as President.

...our party has suffered needlessly due to the candidacies of Donald Trump, Ted Cruz, and others who have spoken about this immigration process in a very negative manner

To what totally non-affiliated patriotic independent process - in response to the “needless suffering” inflicted by Trump and Cruz - might Cárdenas have been referring to? Why this one, thank you for asking.

Attendees will be "the people and organizations the RNC and GOP campaigns count on to engage the Latino electorate," said Alfonso Aguilar, head of the American Principles Project's Latino Partnership and a lead organizer of the meeting. "We’ll discuss the tone of the primary, comments about the Hispanic community and some of the immigration proposals that have been made."

After the meeting, the group plans to hold a news conference to "identify several candidates that will not have our support and who we are certain that if they become the GOP nominee will not get enough Latino voter support to win the general election," Aguilar said.

Aguilar said they will focus especially on the comments and proposals of Trump and Sen. Ted Cruz (R-Tex.) among others. Trump sparked outrage for suggesting in his announcement speech that undocumented immigrants from Mexico are criminals and rapists, while Cruz credited the New York businessman for raising the issue of immigration and refused to condemn the comments.

In other words, a non-disclosed Bush donor and surrogate posing as a “Republican” analyst went on the nation’s leading Spanish-language public affairs show, in part, to promote an anti-Trump and anti-Cruz event organized by a Bush administration alumnus, along with other fellow travellers among the anti-Trump, anti-Cruz crowd. It’s a win-win for everybody involved.

Univision’s news division continues to facilitate attacks on immigration dissidents while appearing to present fair, two-sided debate, and the Bush campaign gets five good minutes of in-kind Sunday airtime. Scroll down to the last paragraph of the interview transcript, and you’ll see exactly what passes for unbiased Republican analysis on Univision.

To be clear, no Republican is ever going to win the Jorge Ramos primary, as such an effort would require many other policy capitulations beyond immigration. That isn’t going to stop some from trying, though, and they will continue to find willing enablers at Univision.

Below is the transcript of pertinent portions of the Al Cárdenas interview as it aired on the Oct. 25 edition of Univision’s Al Punto:

JORGE RAMOS: I just saw the most recent poll among Republican candidates. Donald Trump (is) ahead with 42 percent, Ben Carson 15 percent, Jeb Bush 12 percent. No one imagined that Trump would still be ahead at this stage.

AL CARDENAS: That’s right, it has been a great surprise. The first surprise was that he (Trump) would run and the second surprise is that so many of my party’s voters would take him seriously.

JORGE RAMOS: Why? Why - what has led Trump to be where he’s at?

AL CARDENAS: Well, Donald Trump has captured a dynamic where the people are frustrated, they’re afraid, they’re angry, and he has dealt with that exclusively. He hasn’t discussed any political philosophy or discussed what plans he has; he has only criticized the process, Trump has criticized the leaders of both parties, and that has been well received. I believe that this is an initial curious stage where the voter, well, shares those negative energies of his. But as the process goes forward, I believe that the party and the voters will become more serious and will begin making the right decisions.

JORGE RAMOS: I saw two polls in Iowa. For the first time, Ben Carson is beating Donald Trump. Could this mean that Donald Trump has reached his limit?

AL CARDENAS: Look, Donald Trump can only, uh, he can only prevail if he’s in first place. He has no plan for being in second or third place, because if you listen to his statements or see them here, you’ll see that it’s all about that pride, “I’m in first place”, “I’m beating everybody”, and once he’s not in first place, the myth breaks, and when the myth is broken- the platform, the base of his campaign will crumble.

AL CARDENAS: Donald Trump will NOT be President, is what we have all concluded…and there will be an effort...

AL CARDENAS: That is strong. And there will be an effort among persons that are neither affiliated with one candidate nor the other, but are (affiliated) with the party, and love their country, and will begin an independent process of their own accord, focusing on Donald Trump, and why this country can’t live with Donald Trump as President.

AL CARDENAS: Yes, it helps her within her party. I believe that the eleven hours were unnecessary. It was important to have this hearing, it is important to know why these four persons passed away at the U.S. mission in Libya, and how the problem can be corrected. She was the Secretary of State and she had to answer to Congress. But I believe that to have been exposed to eleven hours of testimony helped her and did not hurt her. Within her party.

JORGE RAMOS: Of course, you were the first Latino chair of the Republican Party of Florida - and you are one of the most influential Republicans nationwide. How will you endeavor to win the Latino vote? Do you fear that your party might have a negative image among some immigrants and Latinos?

AL CARDENAS:  Yes, without a doubt. Look, our party has suffered needlessly due to the candidacies of Donald Trump, Ted Cruz, and others who have spoken about this immigration process in a very negative manner, and I don’t think they will be able to fix the problem. And I believe that perhaps other candidates might not have the time to do so. I believe that Jeb Bush, if he is not chosen by our party as our candidate...uh, he can do it because of the reputation that he has within the community. If it’s not Jeb Bush I find it very, very difficult for our party to satisfactorily compete in the Hispanic community, and if it unable to do so, then (the chance of) winning in the general election is in grave danger.