5 Ridiculous Feminist Trends the Media Want You to Try

Feminism is constantly evolving. It started with land ownership, then the right to vote and somehow made it to free-for-all abortion rights and dying your armpit hair. Wait, what? Here are five absurd demands feminists have made to make their cause a laughing stock.

Do you remember how modern feminists complained about the “stereotypes” of feminists of yore not shavingtheir body hair? Well that supposed myth is certainly making a comeback now. 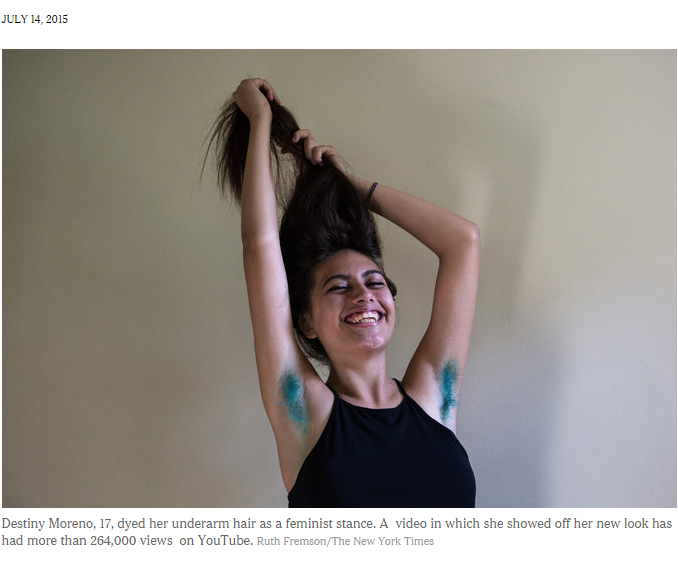 The New York Times devoted Tuesday’s Fashion & Style section to the “Women who dye their armpit hair.” The Times even described how to do it safely.

Growing out one’s armpit hair and dying it became a feminist statement against the “silent or erased aspect of women’s bodies,” according to feminist professor Breanne Fahs, who studied the trend and was quoted by The Times.

This trend was started as an experiment by a hairdresser, according to The Washington Post and later propelled by celebrities (of course) when the pics were replicated on social media. The media went ga-ga over the trend hyping it as the next big thing. 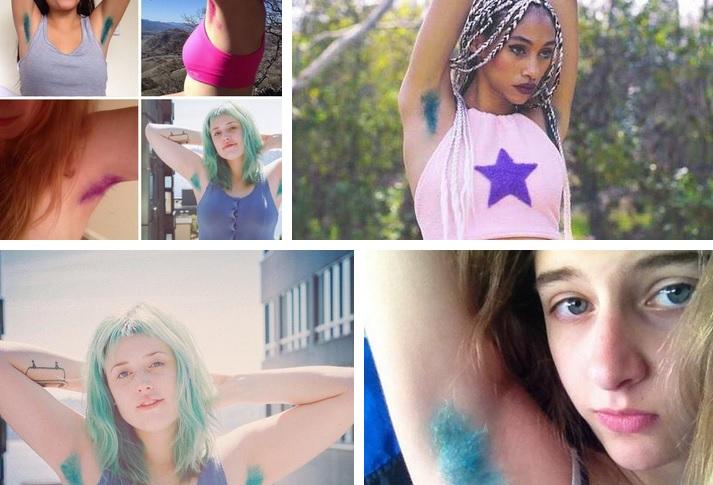 NY Mag asked, “So should we all grow out our pit hair this Summer?” while Buzzfeed hyped it as Summer’s “hottest trend.” According to Buzzfeed, the uber-relevant 1980’s pop star Madonna was the first celeb to promote the trend. A picture she took last year, proudly displaying her armpit hair went viral and inspired other feminists to take up the cause of flaunting their body hair. From there, Miley Cyrus, Lena Dunham and others took to social media to display their armpit hair in all its glory. Some even went further and dyed it bright colors so it stood out more. Buzzfeed even included this smarmy poll response at the end of the article:

”I am a man and thanks to the privilege given to me by the patriarchal society I was born into I have never thought about whether or not I would feel pressured to shave or not shave my armpit hair.”

Cosmo  wasn’t much better with a headline that read “Free the pits! Miley Cyrus lets her armpit hair hang loose, everyone freaks out.”

Of course E! Online, Today Style, and many more wrote about the latest “trend” as well, though Today was more skeptical: “Based on the widespread criticism and even cringing that these women elicit from the general public, this is a trend that may not take off,” Style writer Rebekah Lowin wrote.

It’s hard to believe this one’s real but here it is: You can make feminists really, really mad by making a joke about a fictional character.

During an interview, a reporter asked Avengers: Age of Ultron actors Jeremy Renner and Chris Evans to comment on rumors alleging that in the upcoming film, Black Widow (played by Scarlett Johansson) would be a love interest to three different male characters. The two actors laughed at the absurd question and joked that Black Widow was a “slut” and a “whore.” This caused an uproar from the feminist community, demanding apologies for “slut-shaming” the fictional character. The media hyped the “scandal” and after much complaining, the two actors apologized, saying they meant nothing by it.

That’s not the only time feminists have demanded the “correct” opinions on feminism from fictional characters. Recently, MSNBC (of course) interviewed Miss Piggy on abortion rights. Yes, interviewing a puppet on whether she was “pro-choice."

Cosmo’s July issue boasted singer Nicki Minaj on its cover talking about (what else?) her sex life. Inside, the star talked about how she will “demand that I climax.” Following her cue, the feminist media began chanting “orgasm equality.” The Guardian’s Jessica Valenti pushed, “Why should we demand equal orgasms for all?” while Bustle’s Kristen Sollee vowed, “equality starts in the bedroom.” This, along with the special project by The Huffington Post called, “cliteracy,” raising public awareness about the clitoris – brings feminism to a new, “please keep this to yourself” – low.

The media has gotten on board with feminist’s modern complaint about dress codes and slut-shaming. The Huffington Post has complained about how any woman who is asked to adhere to a dress code of some semblance of modesty is being “slut-shamed.” In one viral video shared by Huff Po, the young feminist lectured, “As much as you like to think it, there is no correlation. And also there is no such thing as a slut. So, however a woman dresses, she’s not a slut, because sluts don’t exist.”

So you can be slut-shamed but ... sluts don’t exist? This kind of nonsense continued where feminists whined about prom dresses and school dress codes for middle schoolers and high school girls requiring skin to be covered, somehow taught girls to be ashamed of their bodies. Feminists even complained that when a teacher asked the girl to change for violating dress code it contributed to “rape culture.”

In an article for Women 2.0, former Google executive Ellen Petry Leanse warned that using words like “just” reveals a woman’s weakness to men. She said, “it didn't take long to sense something I hadn’t noticed before: women used “just” a lot more often than men."

“I just wanted to check in on…” “Just wondering if you’d decided between….” “If you can just give me an answer, then…”“I’m just following up on…” Those are all examples Leanse gives of women using the word in the workplace.

And using the word “just” just isn't about being polite, she adds, writing, it was a subtle message of subordination, of deference."

While she admits that she “has no data,” she argues, “even if it was selective listening, it seemed I was hearing ‘just’ three to four times more frequently from women than from men.”

So women should strike the word from their vocabulary because empowerment, or something.

At Vox, Jenee Desmond-Harris shared June 11 how the tech startup npm’s employees put dollars in a jar for every time they say the phrase, “You guys.” Desmond-Harris celebrated this ridiculous exercise in self-flagellation as a way to eliminate sexism from society. She noted naysayers saying, “You can think of the push to drop “guys” as political correctness run amok, or you can think of it as making a tiny change that doesn’t cost anything and will keep you from being a jerk to half the population -- and help you make the world just a tiny bit more fair.” Yes, feminists really think this way.

She reminded readers that it won’t be “quick or easy” to eliminate this phrase from their lexicon, but she’s “going to keep working on it.” Somehow, I think there are other ways Miss Desmond-Harris could spend her efforts to make the world a better place than not using a specific word.

Other words and phrases feminists mentioned are “bad” in the article? “Rule of thumb” and to “master” a skill.

This is hardly the first time feminists have wanted to censor certain words for their supposed offensive connotations. “Bossy” was on the banned list last year. Feminists said it trained girls to not speak their minds. It makes sense that feminists would want to ban that word. It allows feminists to be bullies without any accountability.