On Monday's Hardball program, Chris Matthews and gang worked furiously to shield Hillary Clinton from legitimate scrutiny over foreign donations to the Clinton Global Initiative, with Matthews grousing that the former secretary of state was facing a GOP "firing squad" who were hoping to bring about the "crib death" of the Clinton presidential campaign by savaging her ethics, or lack thereof, as Secretary of State.

At one point, Matthews even compared Peter Schweizer, the author of "Clinton Cash: The Untold Story of How and Why Foreign Governments and Businesses Helped Make Bill and Hillary Rich," to conspiracy-obsessed liberal filmmaker Oliver Stone. 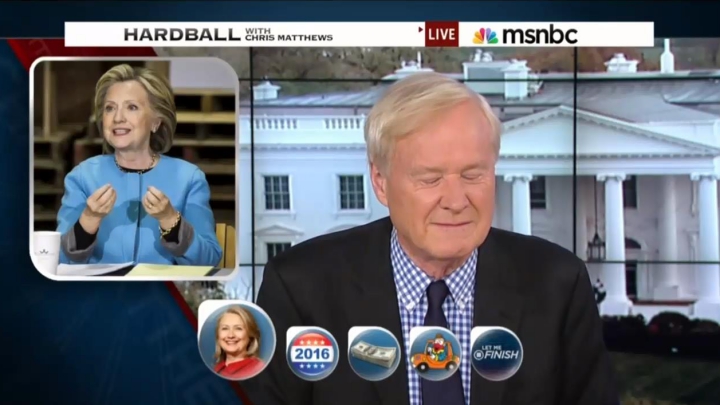 "The anti-Hillary overkill!" blurted Matthews as his teaser line assaulting viewers' ears before the program's opening credits. Moments later, Matthews groused about the "legion of Republican presidential candidates... that holds one abiding, unifying belief. It's that the best way to run for November 2016 is to bash Hillary Clinton in 2015. It's their number one pastime."

After a montage of Republican zingers directed at Hillary, Matthews introduced his comrades, liberal journalists April Ryan and Howard Fineman, who tag-teamed with him to lament the GOP meanies saying "skin-crawling" things and to slam Schweizer's new book.

"Is this [opposition to Hillary] the only thing they agree on, Howard?" Matthews asked Fineman, musing that he's not really sure what Republicans think about Hillary other than blasting Hillary "sells popcorn."

"This is so heavy and so not funny," Fineman tut-tutted the GOP. "It's gonna get old," agreed Ryan.

Moments later, Matthews groused how Hillary was "before a firing squad, they're all shooting at her."

In response to the line of fire, Fineman replied, Clinton needs to effectively shut down discussion of her pay-to-play scandal as alleged in the Schweizer book. Fineman gave out his free advice on air:

FINEMAN: She has to lay down the predicate that she just did which is this is the political season, that this is the kind of stuff you can expect, that this came out the day before she arrived in New Hampshire.

MATTHEWS: This thing being this book.

FINEMAN: The book about selling access to the State Department. I think she should say, flat out in addition to what she said, that it's baloney. And I would have liked to, if I were advising her, I would have told her to do that.

MATTHEWS: Skip ahead to that step.

For her part, Ryan then offered that perhaps Hillary did come out and categorically deny the allegations because "when you dig, you will find something sometimes. And it may be true, it may not be as true."

"What would be true?!" an indignant Matthews shot back, to which Ryan clarified, "she wants to make sure she is OK 100 percent before she goes out and definitively... says something that could incriminate her."

Up next on the plate, Matthews and gang railed against Republicans who were supposedly making an issue of Clinton's age.

"I'm offended by that. Number one, when we look at our politicians, we kind of tend to want someone who's older, more mature, with wisdom, meaning the gray hair," Ryan insisted, conveniently forgetting her enthusiasm for the youthful, first-term senator Barack Obama in 2008 contra the gray-haired, experienced Sen. McCain.

"Women are not held to the same standard," Ryan groused, indirectly accusing Republicans of sexism.

"Nothing humanizes Hillary" or "makes her more appealing" then when she can portray herself as "the victim," Fineman added, seeing a path for Hillary to use criticism to her advantage.

MATTHEWS: According to the New York Times, the book asserts that foreign entities who made payments to the Clinton Foundation or to Mr. Clinton through high speaking fees received favors from Mrs. Clinton's State Department in return. His examples include a free trade agreement in Colombia.... Anyway, a Clinton spokeswoman today called the book "partisan fueled fiction that twists facts and relies on conspiracy theories." I'm with that but I'm waiting to see it, because causality is one of those games. Oliver Stone does it. Oh, this happened and that happened, there must have been a deal.

Of course, having Hillary's private-server emails might help put this controversy to bed, but nope, that little point didn't come up on Hardball.

"The only thing they have to do is destroy Hillary's character if they can, early, do it early," Fineman groused.

"That is their strategy," Fineman repeated for emphasis.