"Either the president doesn’t read the intelligence he’s getting or he’s bulls***ting."

That's what a "former senior Pentagon official who worked closely on the threat posed by Sunni jihadists in Syria and Iraq" told Eli Lake of the Daily Beast subsequent to his watching President Obama attempt to throw the intelligence community under the bus on his September 28 60 Minutes interview with Steve Kroft.

Indeed, numerous officials in the intelligence community briefed members of Congress about the rising threat of ISIS in early 2014, Lake noted in his September 29 story, "Why Obama Can’t Say His Spies Underestimated ISIS":

[I]n prepared testimony before the annual House and Senate intelligence committees’ threat hearings in January and February, Lt. Gen. Michael Flynn, the recently departed director of the Defense Intelligence Agency, said the group would likely make a grab for land before the end of the year. ISIS “probably will attempt to take territory in Iraq and Syria to exhibit its strength in 2014.” Of course, the prediction wasn’t exactly hard to make. By then, Flynn noted, ISIS had taken the cities of Ramadi and Fallujah, and the demonstrated an “ability to concurrently maintain multiple safe havens in Syria.” 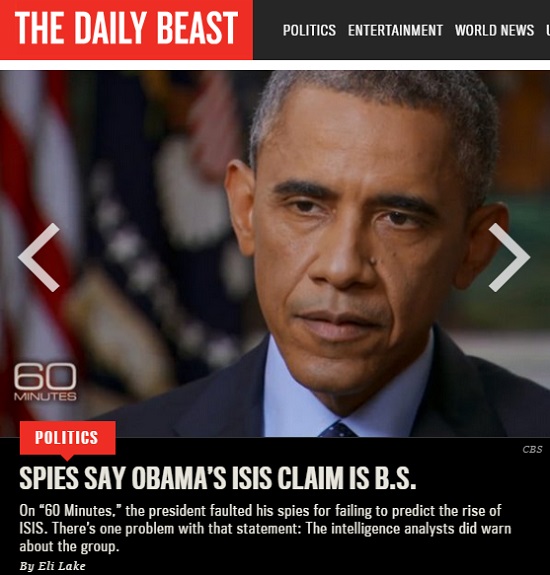 The ability of ISIS to hold that territory will depend on its “resources, local support, as well as the responses of [Iraqi security forces] and other opposition groups in Syria,” Flynn added. He noted that while many Sunnis likely opposed ISIS, “some Sunni tribes and insurgent groups appear willing to work tactically with [ISIS] as they share common anti-government goals.”

Flynn was not alone. Clapper himself in that hearing warned that the three most effective jihadist groups in Syria—one of which he said was ISIS—presented a threat as a magnet for attracting foreign fighters. John Brennan, Obama’s CIA director, said he thought both ISIS and Jabhat al-Nusra, al Qaeda’s formal franchise in Syria, presented a threat to launch external operations against the West.

Sen. Dianne Feinstein, the chairwoman of the Senate Select Committee on Intelligence, said February 4 that because of areas of Syria that are “beyond the regime’s control or that of the moderate opposition,” a “major concern” was “the establishment of a safe haven, and the real prospect that Syria could become a launching point or way station for terrorists seeking to attack the United States or other nations.”

Kudos to Mr. Lake and the Daily Beast for critical examination of Mr. Obama's 60 Minutes interview. It stands in stark contrast to how NBC, for example, found the interview an occasion to spin wildly on the president's behalf.