For CBS, it isn’t enough to cover Hillary Clinton merely in the news.

“Madam Secretary comes from a perhaps surprising source,” Parade Magazine reported, before citing McCreary. “Morgan was watching Hillary [Clinton] during the Benghazi hearings,” said McCreary. “He called me and said, ‘What did she go home to, what does she talk about?’” 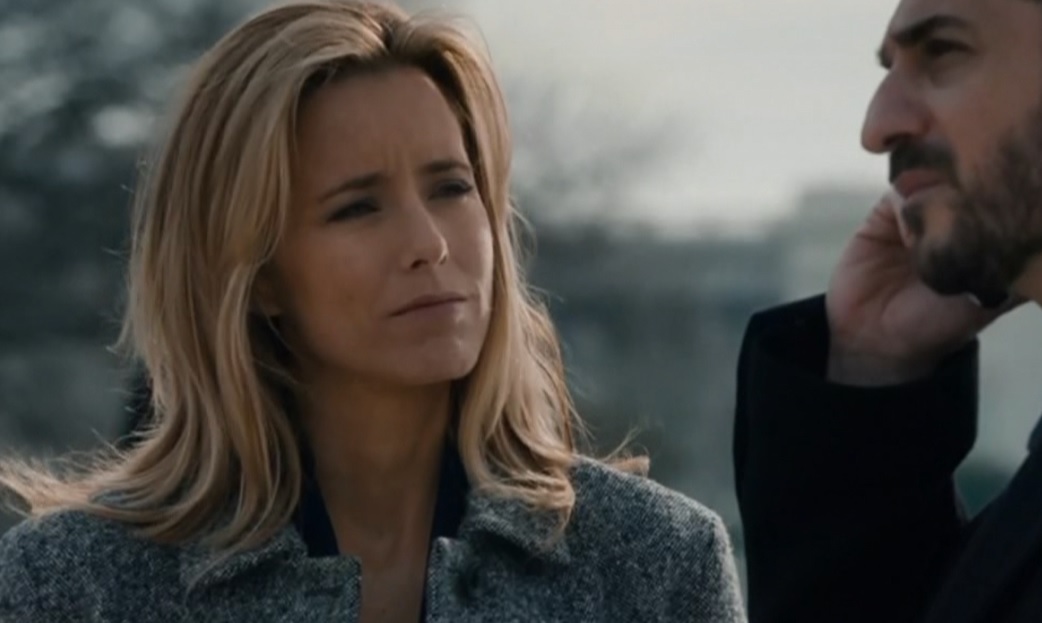 Others involved with the show dismissed a link. “We’re not making a documentary about Hillary Clinton; we’re not trying to support her supposed run for [the] presidency,” stressed Tim Daly, who plays the husband of McCord, to Politico. Likewise, writer and creator Barbara Hall emphasized, “When we got into developing [the show], to me, the first thing I had to do was make it fictional, make a character who wasn’t Hillary.”

(Episode 2, by the way, is entitled, “Another Benghazi.”)

But the media knows the show developers do protest too much.

In the wake of the premiere, The Star-Ledger’s Vicki Hyman praised how Tea Leoni “shines despite stuffy trappings.” Her nod to Clinton came later: “This supposedly fictionalized version of Hillary Clinton is much more human than any real politician.”

Entertainment Weekly staff hailed “Madam Secretary” as “the new face in DC and on CBS.” For the publication, James Hibberd described the “Hillary Clinton-inspired Secretary of State.”

“You can always trust CBS to create superior procedurals and rock-solid dramas,” The Hollywood Reporter’s Tim Goodman supported. “The series is, of course, meant to show us that Elizabeth is great at her job,” he said, before continuing, “Barbara Hall (Judging Amy) seems to have a template that reflects a bit of Hillary Clinton.”

For International Business Times, Amanda Remling noted “The Hillary Clinton Comparison” while Las Vegas Review-Journal’s Christopher Lawrence similarly told how, “If ‘The Good Wife’ didn’t make you think of Hillary Clinton, this one will.”

“Inevitable comparisons have been made to Leoni’s character and the State Department’s former occupant: Hillary Clinton,” Politico’s Lucy McCalmont summarized.

After interviewing Tara Sonenshine, an undersecretary of state for public diplomacy during Clinton’s time at the State Department, The Washington Post’s Emily Heil told how “although the actors and the network have gone out of their way to insist that the show is NOT ABOUT HILLARY, Sonenshine sees shades of her old boss” – from the fictional staff to McCord’s mannerisms.

Wanting more of a comparison, The Daily Beast’s Kevin Fallon translated, “Tea Leoni isn’t Hillary Clinton, but ‘Madam Secretary’ may be her Benghazi.” He lamented, “‘Madam Secretary’ is not the ripped-from-the-headlines drama scandalizing what it’s like to be Hillary Clinton that most of us assumed it was—and hoped for—when the project was announced.”

For The Guardian, Brian Moylan admitted the connection (“CBS's 'Madam Secretary' is more than just a 'Hillary Clinton' show”), but argued, “there aren’t many similarities between Elizabeth McCord (Téa Leoni) and Hillary Clinton.” (Although she wears pantsuits, McCord isn’t “hawkish” enough, has “better hair” and doesn’t surface as a “career politician.”)

Mic’s Elena Sheppard seemed confused, relaying how, “it's clear that the show's secretary of state, Elizabeth McCord, is not Clinton or even close to her” because she embodies “superhero politician according to Americans today.” But, at the same time, Clinton’s “ingredients go into the character of Elizabeth McCord.”

The Boston Globe’s Matthew Gilbert highlighted “the potential for Hillary Clinton compare-and-contrasts.” But again, McCord was too good: “Leoni’s Elizabeth McCord is just this side of a saint, which makes her hard to bear after a short while. She is always right, she is always compassionate.”

Some saw perfection between the two: “Hillary Rodham Clinton is the obvious inspiration, but this is Hillary with a human face: Téa Leoni, who has a husky voice and a loose, engaging manner, is an unusually likable beauty,” Alessandra Stanley wrote in The New York Times.

Earlier this month, The Washington Post’s Jamie Fuller gushed, “Every TV show is about - and has always been about- Hillary Clinton.” Fuller listed how media including The Los Angeles Times, The Wrap, The New York Times, American Thinker, Politico and Deadline made the connection between “Madam Secretary” and Hillary Clinton.

The show’s own network, CBS, gushed over Leoni by asking if she called Hillary for advice on the show.