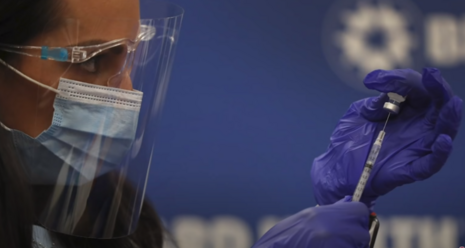 Big Tech companies have doubled down in their efforts to suppress content they have deemed “misinformation” about COVID-19 and vaccinations.

The video, entitled “Planet Lockdown,” reportedly contained what The Washington Post (The Post) referred to as “false claims,” such as “the coronavirus vaccine may cause infertility” and “that the shots contain microchips.” “Planet Lockdown” also committed the unforgivable sin of discussing what The Post called “baseless claims of mass voter fraud in the presidential election.”

The video reportedly “racked up more than 20 million views and engagements, according to the social media monitoring tool CrowdTangle, in late December and January. It went largely unnoticed by the social media platforms playing host to the misinformation until the liberal media watchdog group Media Matters for America published a detailed accounting of the film’s spread on Monday,” The Post reported.

“Following the Media Matters report, tech giants including Facebook, Instagram, YouTube and TikTok began scrubbing promotional clips of the film from their platforms for violating rules against misinformation. GoFundMe also removed a fundraising page for postproduction costs associated with the film, which had raised more than $8,000, according to a screenshot of the site captured by the Internet Archive,” said The Post.

Removing “Planet Lockdown” was not the only recent action that Facebook has taken against what it deemed to be COVID-19 “misinformation,” however. The platform has also reportedly taken action against an anti-vaccine group.

Fox News host of “Tucker Carlson Tonight” Tucker Carlson reported that “CNN identified a group on Facebook called ‘COVID-19 Vaccine Injury Stories,’ and the group was exactly what it sounds like: people talking about their experiences with the vaccine. Last week, that group was in the top 20 groups on all of Facebook. Today, after the CNN piece came out, we searched for that group. We couldn’t find it, even when we searched specifically for its name. Effectively, ‘COVID-19 Vaccine Injury Stories’ no longer exists.”

Even liberal journalist Glenn Greenwald bashed Facebook’s censorship of dissenting opinions in a Feb. 10 interview with Tucker Carlson.  “When the vaccine is available where I live, I’m going to get it, my family’s going to take it as well,” Greenwald said. “I informed myself” by using “the free and open internet” to reach a decision about getting vaccinated. “B​ut if the internet were a place where no dissent were allowed, I would have way less confidence in that ability because that would mean this is a profession that isn’t confident enough to allow dissent​,​ and if they’re not confident enough to allow dissent, I think that they earn much less trust and faith in their pronouncements​,” Greenwald concluded.

None of this censorship came out of the blue. Facebook announced in December of 2020 that it would remove “false claims” about the vaccine. It even planned to promote the vaccine on its platform. YouTube went so far as to censor Senate testimony from a doctor about a potential treatment (Ivermectin) for the virus earlier this month. The video platform also bragged in January that it had removed over 500,000 videos about the virus.

Conservatives are under attack. Contact Facebook headquarters at 1-650-308-7300 and YouTube at 650-253-0000 and demand that Big Tech be held to account to mirror the First Amendment while providing transparency, clarity on “hate speech” and equal footing for conservatives. If you have been censored, contact us at the Media Research Center contact form, and help us hold Big Tech accountable.