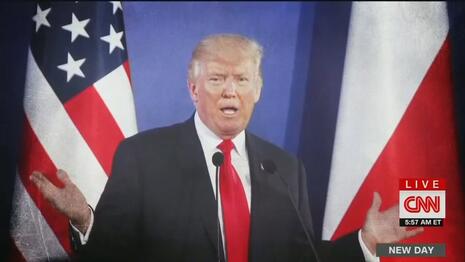 Have you ever disliked a candidate so much that you just assume that they will open the “door to unrest” and create a “constitutional crisis” on election night? Apparently, The New York Times has.

“Imagine: It’s midnight, and the electoral map looks quite red. But news networks and election officials aren’t calling the swing states, as this year’s record numbers of mail-in and absentee ballots have yet to be fully counted,” said The Times editorial. “Mr. Trump, leading in the popular vote, decides he’s seen enough. He takes to his social media platforms and declares that he has won re-election and will accept no other result. He tells his tens of millions of followers that the Democrats and the press will try to change the result and steal the election. The door to unrest and constitutional crisis swings wide open.”

Not a single line in the editorial was dedicated to fears that Democratic nominee Joe Biden could also declare an early victory.

Unsurprisingly, The Times Editorial Board appears to lean decidedly to the left.

Binyamin Appelbaum, who covers economics and business for The Times, for example, tweeted on Sunday: “For most of us, it's the future of democracy that's at stake on Nov. 3. For Donald Trump, it's the little question of whether he owes the federal government about $100 million.”

Mara Gay, who covers New York state and local affairs, is also on The Editorial Board, tweeted: “He’s weak. And he can be defeated,” along with an article entitled “Trump Wants You to Think You Can’t Get Rid of Him.”

In January of this year, The Times Editorial Board endorsed both Elizabeth Warren and Amy Klobuchar for president.

The Times suggested that “technology’s biggest platforms need to create a clear, explicit framework for what qualifies as electoral misinformation and disinformation. They must determine exactly what they will not tolerate and what the penalties will be for violating those rules.”

Regardless, The Times doesn’t need to worry too much about Big Tech censoring Trump. The biased social media giants have already been doing plenty of that. Just in the last few weeks, Facebook has removed or labelled multiple posts from President Donald Trump. For example, Facebook flagged and Twitter censored Trump’s post that told voters how to make sure their votes have been properly collected and tabulated.

Conservatives are under attack. Demand that Big Tech be held to account to mirror the First Amendment while providing transparency, clarity on “hate speech” and equal footing for conservatives. If you have been censored, contact us at the Media Research Center contact form, and help us hold Big Tech accountable.