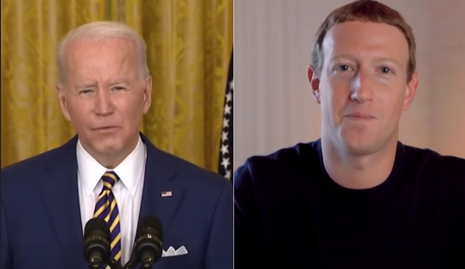 The New York Times is whining that Big Tech won’t be focused on eliminating “election misinformation” during the 2022 midterms.

The Times published a pathetic sob story headlined, “As Midterms Loom, Elections Are No Longer Top Priority for Meta C.E.O [Mark Zuckerberg].” The newspaper fretted how Zuckerberg, “who once said securing elections was ‘the most important thing,’ has shifted Meta’s focus to the metaverse. That may have real-world implications.”

Forget about the “real-world implications” that Zuckerberg’s Orwellian metaverse has in its own right, The Times’ view of “real world implications” appears to be that Meta allegedly won’t be censoring users as much as it once did during the 2020 presidential election. “Safeguarding elections is no longer Mr. Zuckerberg’s top concern, said four Meta employees with knowledge of the situation,” the newspaper bleated. “Election misinformation remains rampant online.”

The Times couldn’t contain itself and tried to scare readers about what Meta’s shift in focus could mean for “faith in the electoral system” in the face of the leftist Jan. 6 Committee hearings:

The shift in emphasis at Meta, which also owns Instagram and WhatsApp, could have far-reaching consequences as faith in the U.S. electoral system reaches a brittle point. The hearings on the Jan. 6 Capitol riot have underlined how precarious elections can be. And dozens of political candidates are running this November on the false premise that former President Donald J. Trump was robbed of the 2020 election, with social media platforms continuing to be a key way to reach American voters.

But The Times didn’t just limit its frustrations to Meta. It also complained that other Big Tech platforms like Twitter were allegedly reeling back their election censorship operations as well:

Other social media companies have also pulled back some of their focus on elections. Twitter, which stopped labeling and removing election misinformation in March 2021, has been preoccupied with its $44 billion sale to Elon Musk, three employees with knowledge of the situation said. Mr. Musk has suggested that he wants fewer rules about what can and cannot be posted on the service.

MRC Free Speech America’s CensorTrack database logged 3,975 cases of censorship as of Thursday morning; 1,016 (26 percent) of those cases were from Facebook alone. The Meta Oversight Board’s annual report showed that it received “more than a million appeals” on the company's “content moderation decisions” between October 2020 and December 2021. More than 8 in 10 of user appeals to restore content to Facebook or Instagram involved Meta’s so-called “rules on bullying, hate speech or violence & incitement.”

Conservatives are under attack. Contact The New York Times at 1-800-698-4637 and demand the newspaper stop promoting censorship of speech online.