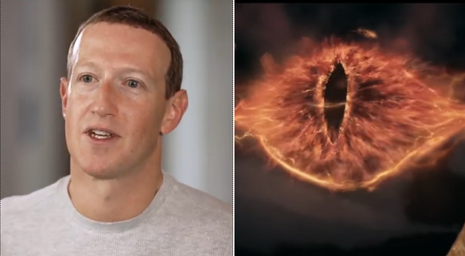 It seems like terrible public relations for Meta CEO Mark Zuckerberg to publicly refer to himself as the Dark Lord of Mordor while running one of the internet’s largest censorship operations.

Zuckerberg joined The Tim Ferriss Show on March 24 to discuss his management style. After praising Zuckerberg as having “a lot of founder-driven control,” Ferris asked Zuckerberg about his “15-year roadmap for metaverse.” Ferriss asked Zuckerberg how he manages his personal psychology and his employees as they work toward near-term and intermediate-term steps to develop the metaverse.

Then came the cringe moment for Zuckerberg: “I do think managing energy is an interesting thing. I mean, some of the folks who I work with at the company — they say this lovingly — but I think that they sometimes refer to my attention as the Eye of Sauron.” Twitter founder Jack Dorsey tweeted in response to Zuckerberg’s comments: “makes sense.”

It got worse when Zuckerberg tried to explain his weird metaphor.[B]asically, they’re like, ‘You have this unending amount of energy to go work on something. And if you point that at any given team, you will just burn them.’”

Yikes. Not such a good look for the guy who’s spearheading the creation of the metaverse.

Zuckerberg’s ironic reference to himself as the iconic enemy in J.R.R. Tolkien’s “Middle-earth” fantasyland just makes his company’s Orwellian gambit to censor content it disagrees with all the more creepy. The Wall Street Journal released a trove of internal Facebook files in October showing the company’s internal debates about how far it can go in censoring conservatives. The Journal called attention to two censorship tools that suppress content on the platform. One tool, called “Sparing Sharing," allegedly reduced the reach of frequent posters who "disproportionately shared false and incendiary information,” The Journal wrote.

But Meta’s issues go far beyond censorship. WIRED recently published an article citing extensive evidence of “child predation” and grooming on Facebook. The evidence included private groups and users specifically soliciting young children with messages like, “Looking for a perverted girlfriend of 11,” with emoticons covering up photographed genitalia. The piece about online “child predation” also insisted that Facebook isn’t taking proper action to combat sexual targeting of minors; in fact, Facebook reportedly reviewed at least one group and determined it did not violate its rules.

Conservatives are under attack. Contact Meta headquarters at (650) 308-7300 and demand that Big Tech be held to account to mirror the First Amendment while providing transparency, clarity on “hate speech” and equal footing for conservatives.If you have been censored, contact us using CensorTrack’s contact form, and help us hold Big Tech accountable.